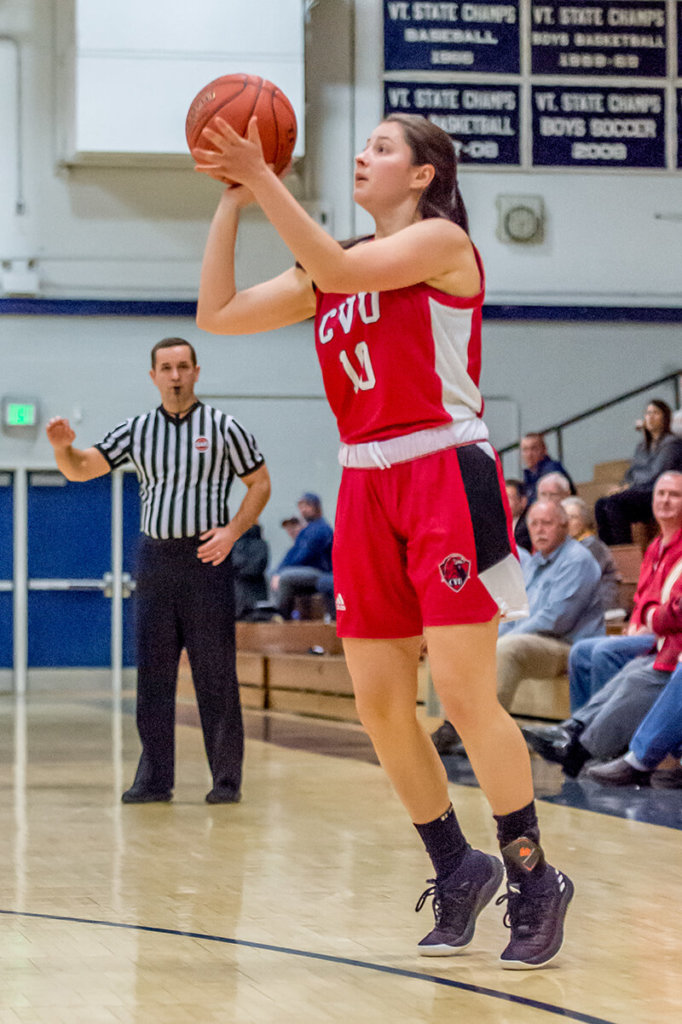 Rather than report game by game since our last issue in mid-December, we will focus on the honors earned by CVU athletics in 2018 according to the Burlington Free Press in its January 3 issue.

The initial item, unfortunately, was the report of St. Johnsbury’s defeat of the Redhawk women’s basketball team in the state finals last year, ending CVU’s five-year winning run coupled with a lengthy unbeaten streak. Not letting the loss phase them, the team is off to a 5 and 0 start to this season with all five games won by 20 or more points.

The second Free Press top story was less team and more individual. It was the battle CVU sophomore Storm Rushford fought with cancer, including treatments that “ravaged his body.” He came through these, however, to suit up with the baseball team and throw the first pitch in the team’s “Strike Out Cancer” game.

The women’s cross-country runners proved they were not only of championship character locally, but statewide, regionally and even nationally. The opening sentence in the Free Press article said, “Vermont’s finest running program found yet more ways to wow in 2018.” They began with their tenth state championship in October and moved on to the Northeast Regionals where they came in second and earned an invitation to the Nike Cross Nationals in Portland, Oregon. They raised the money needed to make the cross-country trip and finished 19th in the country.

Finishing three times as an institution mentioned among the top ten stories, CVU also managed to place twice among “Other noteworthy stories of 2018.” Keeping its “dynasty intact,” the Redhawk men’s lacrosse team beat St. Albans for its sixth straight Division I state title, and “Soccer Central” swept both Division I state titles with the women taking their historic eighteenth and the men coming back to win for the first time since 2012. The list of Redhawks on the Free Press’ all-state soccer teams is particularly impressive for the women. Midfielder Sydney Jimmo and defender Jess Klein earned first-team honors. Honorable mention went to forwards Sara Kelley and Josie Pecor, midfielders Catherine Gilwee and Olivia Morton, and goalie Maeryn Askew. Only Jimmo and Kelley have graduated.

In field hockey, senior Nora Weisman-Rowell was selected for the first team, and her classmate and goalie Christie Carlson received honorable mention.

2019 is off to an impressive start for gymnasts
CVU gymnasts traveled to Milton and won every event against the Yellow Jackets. Laurynn Bombardier took all-around honors, with Bridget Haggerty in second. Laurynn won bars and beam, placing second in the vault behind her teammate Logan Claffy. Logan also won the floor exercises.

Three tournaments bring wrestlers to the mat
The Londonderry, New Hampshire Holiday Tournament, the Hubie Wagner Invitational and the Saratoga Invitational brought CVU’s wrestlers to the mats and gave the team the opportunity to show its prowess. All three tournaments brought together schools from several states. At Londonderry, Redhawk Justin Bissonette in the 170-pound class and Jared Forsythe at 182 dominated their classes for the second week in a row.

In the 47th annual Hubie Wagner Tournament in Middlebury, five CVU wrestlers earned spots in the championship round. Justin Bisonette won his 170-pound class; Jared Forsythe at 182, Will Murphy at 195, Riley Brown at 120, and Luke Leonard at 113 were runners up. Matt Trifaro took fourth. The team was the top Vermont school in the meet, placing third out of 11 behind Bow, New Hampshire, and Granville, New York. Bissonette was impressive enough, winning four of his matches by pins, to earn “Athlete of the Week” from the Free Press.

The New Year began Saturday in Saratoga Springs, New York. Again, Justin, Jared and Matt were the top finishers for CVU, and the Redhawks were the lone Vermont school among the 18 in the competition. Coach Gunnar Olson said he felt it was “important to test ourselves outside of our borders and comfort zone.”