Terror in Botswana: Field notes from an African safari

Terror in Botswana: Field notes from an African safari 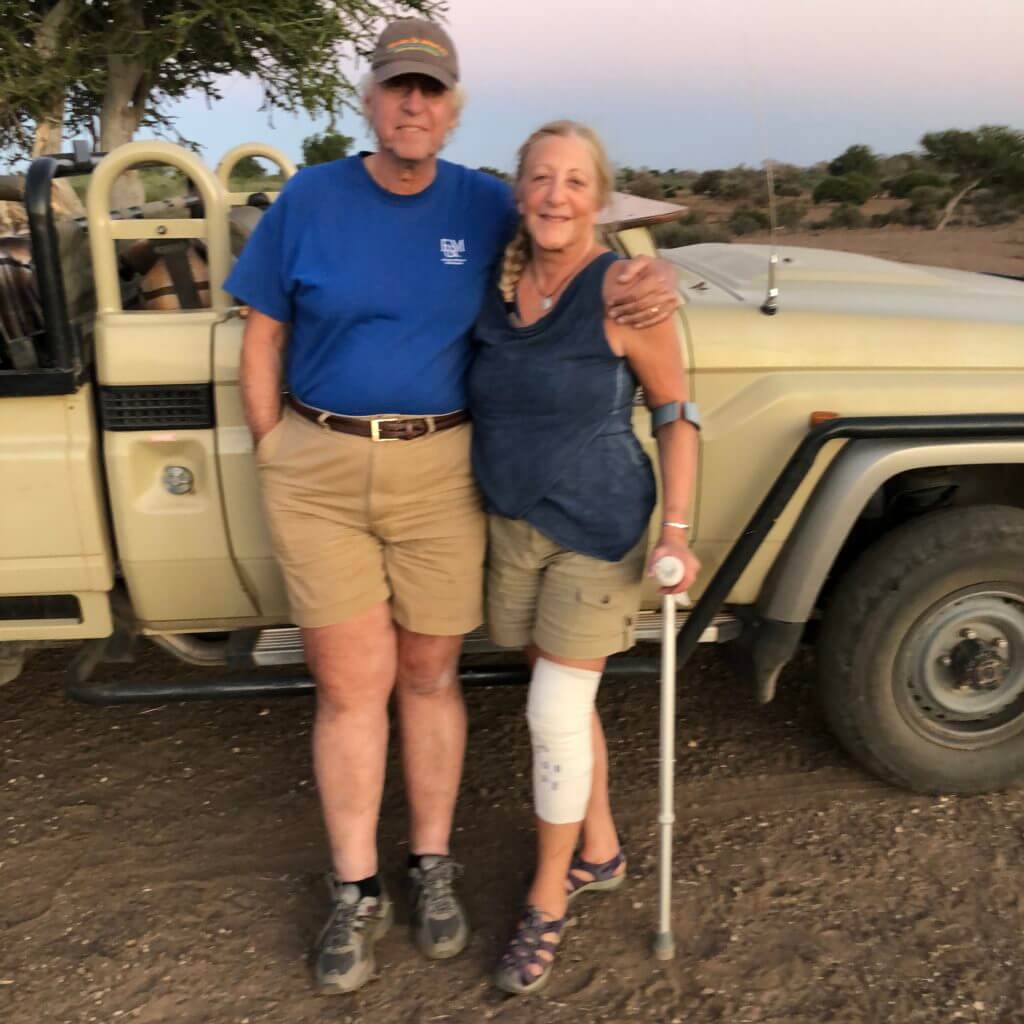 My husband, Enzo, and I recently returned from a nine-day safari in Botswana, Africa. Our first camp was located in the Okavango Delta, a vast wetland that offers rich wildlife viewing.

We spent the first morning at an elephant sanctuary, having an “up close and personal” experience with two gentle giants. We touched and hugged and shared kisses with the female, feeling her velvet ears and the soft underneath of her trunk. I hugged the male’s long beautiful tusks. I was moved to tears by these sweet giants. Later we were treated to a lunch under the trees while our elephant friends enjoyed a pile of potatoes and onions. Returning to camp, we sat on our deck watching families of elephants grazing and frolicking on the grassy plain.

Following afternoon tea, we climbed into a Land Cruiser with our guide, “Professor Ice,” who provided us with a wealth of information about the animals and plants and what it was like growing up in Botswana as a Bushman. We saw herds of elephants, water buffalo, wildebeests, zebras, giraffes, impalas and baboons. As dusk set in, we found ourselves parked by a misty pond where hippos roared at us, jaws agape, eyeing us menacingly as they tried to scare us away so they could emerge onto dry ground for the night.

When the incredible African sunset led to night, Ice took out his flashlight and pointed out the constellations, stars and planets of the southern sky. As we drove back in the dark, a large hyena slowly crossed the road, staring at us with a face like a frightful Halloween mask, his eyes lit up by the headlights.

Later that evening, as we were returning on foot along the sandy path to our tent accompanied by Professor Ice and team trainer Mandy, we were suddenly attacked by an enormous bull elephant. He spread his ears wide, shook his head and came right at us. Ice immediately instructed us to “get behind a tree!” while he remained fully exposed, facing the oncoming animal with his arms extended. When he turned to join us he was butted from behind by the elephant. Enzo, finding himself further down the trail without adequate cover, instinctively froze in place with a perfect view of what was to follow.

The elephant positioned himself facing the tree behind which Ice, Mandy and I stood huddled together, tossing his head, flapping his ears, stomping his feet and, finally, charging the tree with one or the other tusk straddling the tree trunk. Ice had his arms around us and deftly guided us in the opposite direction from the threatening tusks. Failing to make contact with his prey, the elephant would separate himself from the tree, back away, gesturing menacingly, charge the tree again and scuffle left or right with the three of us repeatedly side-stepping to avoid whichever tusk we saw coming.

It dawned on Enzo that the elephant would soon grow impatient, realize that he presented a much easier target and turn his attention to him. As if he could read his thoughts, Ice urgently ordered Enzo to “get down!” He sank slowly to one knee.

We twisted and pivoted back and forth for what seemed to be forever. In between, there was total silence except for our nervous panting. Suddenly a big tusk would appear followed by a scuffle. Then silence again, until the tusk reappeared. Though there wasn’t much time to think about anything but the present moment, for a split second my mind went to what death by this elephant would be like… I imagined that I would be gored and trampled. There didn’t seem to be any way out.

Earlier, Ice had offered me a blanket to ward off the evening chill. I had kept it wrapped around my shoulders through dinner and still had it on when the elephant skirmish began. At some point in the action, the improvised shawl dropped around my ankles, tripping me and causing me to twist my knee. I felt it pop. Ice caught me and supported me as we continued jerking away from the giant tusks. I could barely stand.

Enzo noticed that the elephant’s trunk had some kind of large fabric object in its grasp and was violently whipping it to and fro and, in a final defiant upward sweep, hurled it among the upper branches of the tree. We would later discover that the mystery fabric was actually my blanket. But in the moment it seemed as though the elephant was rehearsing what he hoped he’d eventually do to one of us.

Between charges, the elephant was silently listening and seemed to be deciding which way to go next. Shaking and breathing hard, I buried my face in Mandy’s back for fear of drawing more attention to our hiding place. But I needed to keep watch for the tusks, so I tried to deaden the sound of my breathing. The giant tusks kept coming around the tree, sending us into terrified rotations.

Just as despair began to take the place of terror, Ice called out loudly for “help!” Within a few minutes we saw headlights skirting the edge of the brush and human shapes carefully threading in our direction. So now, with one of his charges painfully injured, the animal/human stalemate dragging on, but fresh hope in the air for some outside intervention, Ice made a courageous decision. He emerged from behind the tree, reached down and grasped a handful of trail dirt, throwing it into the air immediately in front of the elephant. A huge cloud of dust exploded in front of the beast, causing him a moment of confusion.

Someone grabbed me from behind and carried me to the truck. Within a few minutes, I was riding someone’s back from the car to the tent, shoeless and shaking… but alive. In fact, I was in shock. Thankfully Enzo was there. He poured a tumbler of port and I gulped it down. Mandy arrived with a homeopathic medicine promising “calmness” in the form of a once-every-half-hour dose.

As clearly as I still recall every moment of the actual elephant encounter and escape, the rest of that night remains a blur. I remember Enzo and me suddenly finding ourselves alone, me limping and occasionally crying out in pain through my bedtime wash-up routine…then complete silence except for the occasional far off grunt and branch rattling of a distant unidentified animal intruder.

I was awakened in the morning by a rustling in the trees alongside the tent. As I lifted the flap to see what was there, our elephant was standing next to the tent tearing limbs and leaves from the trees. We radioed for help and they came right away, but the adrenaline was back and I was again shaking.
Ice arrived to announce that we would be flown by helicopter to a nearby clinic to be evaluated. At the clinic, a doctor took x-rays and confirmed that I had a ruptured ACL. Finding her splints had all been stolen, she fashioned a splint from some flexible metal and wrapped the entire length of my leg so that it was immobilized. We returned to camp with crutches, brace, leg splint and thigh-to-ankle bandaging, just in time for high tea that had been set for us on our front deck. The decision to continue was made. The following day, we were back on our safari schedule with me assuming the co-pilot seat next to the man who saved my life, Professor Ice.

I asked about what would happen to “our elephant.” We were told that he had been hanging around for about two weeks before this happened, being mischievous and aggressive. He was always alone and he was in a male form of heat called “musth.” Our elephant didn’t have any companions and the females rejected him. Who knows what trauma he had experienced in his life? The camp reported the incident to the wildlife authorities. We weren’t told what action they were likely to take.

Our final departure from the camp was very emotional. The staff decided to treat us to a farewell concert. As we were seated in the truck waiting to leave, various staff members began appearing and wandering toward us. By the time we realized what was going on, they had broken into full voice, harmonizing an African farewell song, swaying and waving their arms. One woman made the sound of ululating, a high pitched screech made while her tongue went back and forth, a sound taught to female children by their mothers as an expression of joy. I tried to stand in the Land Cruiser with my crutches and swayed with the music. I even tried ululating, which made them all laugh. As they continued to sing, they filed by us one by one to hug, shake hands and wish us well. It was a beautiful moment. Professor Ice presented me a beautiful little woven vessel that his grandmother had long ago made for him as a token of protection. It goes without saying that we left camp, streaming tears of appreciation.

Over the next several days we traveled to two more camps where we were treated with much the same high degree of care and consideration that we experienced at our first camp. We saw large herds of elephants, baboons, hippos, giraffes, zebras, hyenas, monkeys, lions, ostriches, cheetahs, leopards, various antelope, a variety of birds and more!

We returned home to Charlotte after 26 hours of flying—from our camp in the heart of Botswana, to a small bush airport, then to Johannesburg, Paris, New York and finally to Vermont. It’s comforting to be home again where there are no big bad surprises and where we know the routine by heart. But this winter, we will be warmed by more than wood fires and woolen blankets. We’ll have our fond memories of the kind, caring friends we made in Africa to comfort us, special people like The Professor and Mandy who helped us understand, accept, find joy in and, yes, even survive the wonders of Africa.

Deborah is the executive director of Partners in Adventure, which offers camps and year-round social and recreational activities partnering peers with and without disabilities in Chittenden County. She lives in Charlotte with her husband, Enzo Di Maio, former Emmy Award-winning senior executive producer for Vermont Public Television. They have a son, Ari, who has cerebral palsy.