View from my house during my homestay in Bonela, Durban. 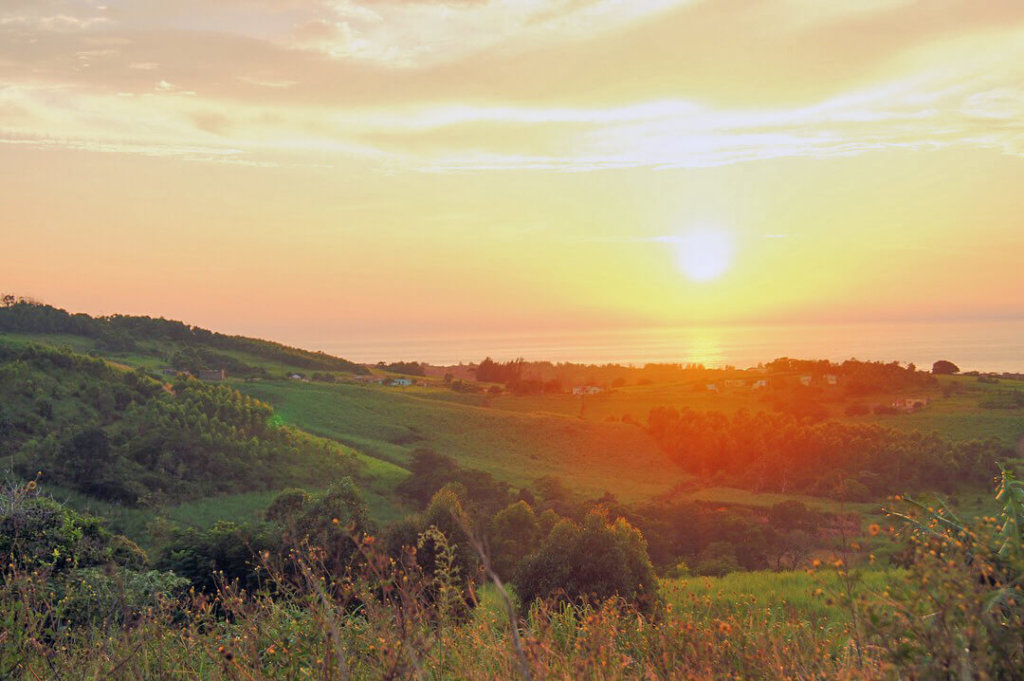 The view from my house during our rural homestay in Dokodweni.

Perhaps it was South Africa’s recent political history, or maybe it was the excitement of going to a place that I believed was the polar opposite of the small Vermont town I grew up in, but around Christmas of 2017, I found myself packing my bags to embark on a five-month study abroad program in Durban, South Africa.

SIT (School of International Training) is a study abroad program run out of Brattleboro, Vermont. The purpose of the program is to learn about post-Apartheid South Africa and, specifically, the racial and socioeconomic divides that still exist today in that country. As a political science and journalism major at school, I figured this program would be right up my alley. It was advertised as “experiential learning,” and, though I didn’t know the full extent of what that meant, I had a feeling it wouldn’t be giving me the usual experiences of a 20-something-year-old studying abroad.

I think of my time in South Africa as two separate trips. The first two months were spent in homestays in Durban. The second part was spent in Cape Town, working for a national South African newspaper called The Sunday Times. I got to see protests, speeches, court trials, a duck farm and a cheese festival. I was also in the country to see a change of president and the death of Winnie Mandela. Working for the newspaper was one of the most exciting experiences I’ve had, and my biggest challenges and most vivid memories are from those first two months.

Two weeks into the program, after orientation in Johannesburg, we were handed a paper with the names of our new families and the address of our home for the next month and a half located in a township called Bonela in Durban.

When I Googled Bonela, Durban, images of middle class houses popped up—houses sitting on hills with big gates in front of them. What was not shown was the mixture of informal shack settlements and government-built houses all squished together. Bonela is a township where black South Africans were forced to live during Apartheid. Basic human rights were denied these citizens until just 20 years ago, and to this day, many families have no choice but to live there.

I knew culture shock would come, but nothing was harder than the first 24 hours in my new home. As we drove up to the gate of my house, a thunderstorm was rolling in that offered my first lesson in traditional Zulu culture. I quickly learned that during a storm you must cover all the mirrors, turn off all electricity and cover your shoulders until the storm passes. The crackling thunder and heavy rain was mixed with the tune of our neighbor singing a song in Zulu for the rain to pass and the screams of a lady up the street who was mad at her husband. A roar of laughter erupted next door from a group of men outside the Tuk Shop next to my house. It was all so unfamiliar but would become the soundtrack to daily life in my new home.

After the storm passed, I moved into my room. I had a full bed to myself which I felt guilty about, considering six people lived in our house and there were only two bedrooms. Nonetheless, my room was my own space, and I would learn to love and desperately miss it later on in the program. It also served as my bathroom, or at least the bucket in the corner did. Our bathroom was broken and my family didn’t have the money to fix it. So bathing consisted of using two buckets of heated water and a sponge. As I lay down my first night listening to my new roommates walk around—about a dozen or so roaches—and trying not to think about getting to know the bucket in the corner of the room, I thought to myself, “What the hell am I doing?”

That desperate thought was answered by my families who were more than welcoming to me. My family consisted of my two sisters: Pamela who was 21 and Luyanda who was 3. Mama Joyce was the boss of the house, and her friend Mpho helped take care of Luyanda, whose mother had passed away right before I got there. Mama Joyce worked as a cashier everyday at a supermarket but still came home to feed and take care of the family. Everything she did revolved around taking care of others.

They were so kind. They were also so open. No topic was off limits, and I found that this was true of South Africans as a whole. People don’t filter what they say to one another, especially in politics. There was certainly conflict: Mpho was an ANC supporter, wanting to remove President Zuma, the president at the time, while Mama Joyce mostly questioned me about Trump. No matter what the topic, every conversation was filled with differing opinions and curiosity as we exchanged thoughts.

One thing that my colleagues and I did not expect to find, even 20 years after Apartheid, was racism. When Uber drivers would see our destination was in a township, they said things like, “Why would you ever live there? Do you feel safe there? You’re a bunch of white kids living with Zulu families? That’s disgusting.” Some even refused to drive us there. But never once in the township did we hear things like that. We couldn’t have felt safer and, once we got used to our new environment, couldn’t have felt more at home.

My fellow students and I were in Bonela for a month and a half. Aside from meeting people within our communities, the program gave us incredible exposure to influential political figures in South African history. We got to meet people like Albie Sachs and Mac Maharaj, two of the founding fathers of South Africa’s Constitution.

After our time in Bonela, we moved to our rural homestay for two weeks. Though we didn’t spend as much time there, this proved to be another challenge. It was located in a town called Dokodweni, north of Durban.

We were dropped off at the village’s school that sat on top of a hill overlooking the fields of sugarcane rolling down to the ocean. Again, during a thunderstorm! Only this time instead of running inside, we had to walk several miles to our houses.

This town reminded me of my home a world away. There were cows throughout the hillsides, and every night there was a familiar but unforgettable sunset over the ocean. The only thing missing from the view were mountains.

We had been warned that our rural homestay would be like “camping but with a bigger tent.” By now I had adjusted to bucket baths and bugs, but this house was a shell. There was no life to it, and we barely spent any time inside since it was so hot. There was barely any furniture inside and no running water. The electricity went in and out, mostly for the icebox that we were lucky to have.

The two weeks we spent in Dokodweni were perhaps the most influential of the trip. During the weekends, instead of going to clubs like my friends from school who were in other study abroad programs, we were taken to a prison.

We sat on the ground in the prison yard talking to the inmates, one on one, with no bars or walls between us. Again, the people we spoke with were so kind and so open. There was no hesitation in their stories of how they got there and the decisions they made. I was learning about a part of their society that would’ve felt foreign even in my home country. I had never been to a prison, let alone spoken to a prisoner.

The biggest learning moments I had came from those conversations, with the prisoners, with my families, and it happened because everyone was open with one another, even though we came from completely different walks of life. I think that even in a small town like Charlotte there are always new people to meet and new experiences to be had if you look for them. I cherish those conversations and could not be more thankful to have had this experience, even the most challenging moments—although I will not be taking a bucket bath anytime soon.

Jacqueline Flynn is a Charlotte native and a rising senior at Texas Christian University in Fort Worth, Texas. At TCU, she studies political science and journalism with an international emphasis. She has a passion for photography. Jackie is currently working as a Pulitzer Center Student Fellow, reporting on the water crisis in South Africa. We welcome her to The News as a summer intern.