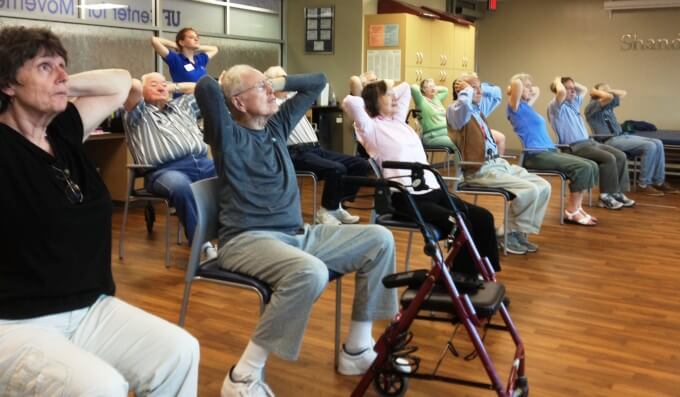 According to the American Parkinson Disease Association (APDA), approximately one million Americans are presently living with Parkinson’s disease and 60,000 new cases are diagnosed every year. Although there is currently no cure, a growing body of research suggests that exercise may play an important role in managing and reducing the common symptoms of this disease.

Parkinson’s disease (PD) is a neurodegenerative movement disorder that negatively impacts the area of the brain that create dopamine, the neurotransmitter that plays a crucial role in our ability to initiate, time and coordinate movement. Individuals with PD experience a gradual depletion of dopamine, which results in difficulty with everyday physical activities such as walking, getting in and out of chairs and stair navigation. A number of other motor symptoms are also common, including involuntary quivering (tremor), muscle rigidity or stiffness, slower and smaller movements, difficulty with balance, low voice volume and reduced facial expression.

In addition to pharmaceutical management, physicians are now strongly recommending a regular exercise program to help address the associated motor symptoms. An article published in 2017 in the Medical Science Monitor used functional magnetic resonance imaging (fMRI) to observe how the specific areas of the brain that are negatively impacted by PD respond to exercise. The study involved 18 individuals diagnosed with PD who embarked on a 16-week exercise program that involved both cardiovascular as well as strength and resistance training components. Results from the fMRI study revealed increased brain activity in both the prefrontal cortex as well as the substantia nigra—the latter being the area of the brain where brain cells, or neurons, produce dopamine. Remember, people with PD undergo a depletion of dopamine, so increasing activity in this region is particularly meaningful.

This type of research is leading scientists to suggest that exercise may play a significant role in stimulating and diversifying the neuroplasticity of our brains. In other words, exercise helps increase the number of connecting neural pathways in the brain, which may help compensate for other areas of the brain that are impaired. In the case of PD, a bountiful, more diverse neural network may help offset and possibly temper the dopamine deficiency that takes place.

Any form of exercise is healthy, but some types of exercise may be more effective than others when it comes to addressing PD. Studies suggest that higher-intensity exercise, rather than gentle or low-moderate intensity exercise, may have a stronger impact on delaying the progression of symptoms. Movements that incorporate music and memorization may also be more effective in strengthening the neurological network, as they call upon many different regions of the brain to perform. For this reason, t’ai chi and dance are often recommended forms of exercise.

A number of research studies have demonstrated the effectiveness of tango dance, in particular, on symptoms of PD, including improved gait and balance. The specificity of steps in tango dance, which are performed in unison with the distinct beat of music, is very effective in stimulating several areas of the brain. The Mark Morris Dance Group, a world renowned modern dance company based in New York City, developed a program in 2001 called “Dance for Parkinson’s,” which offers daily dance classes for the public, as well as trainings in becoming certified to teach their method.

Exercise, and any movement in general, can improve your flexibility, which is important in staving off the gradual stiffening and rigidness that accompanies PD. Emphasizing large and exaggerated movement at varied speeds is also beneficial for counteracting the tendency to move smaller and slower. A PD-specific therapeutic exercise program known as “LSVT BIG and LOUD” has been shown to be helpful through practicing a variety of exercises that interweave large motions with high-volume vocalizations.

In addition to helping combat motor impairments, group exercise classes also offer a supportive community for people with PD and their loved ones. Exercise can sometimes be thought of as an arduous and taxing activity, but a group atmosphere often lends itself to playfulness, curiosity and a cooperative approach.

If you or someone you know has PD and is interested in starting an exercise program but is unsure how to get started, there are a number of local resources to take advantage of. A great place to start is the Vermont Chapter of APDA which is located in Burlington. You can visit their website at apdaparkinson.org where you will find an array of information on exercise classes, support groups, current research and upcoming events. Please also see the sidebar for information on local exercise and dance classes for people with Parkinson’s disease.

Laurel Lakey has a BFA in dance and works as a Physical Therapist Assistant at Dee Physical Therapy in Shelburne, VT. She lives in Charlotte, VT with her husband, dog and three chickens.