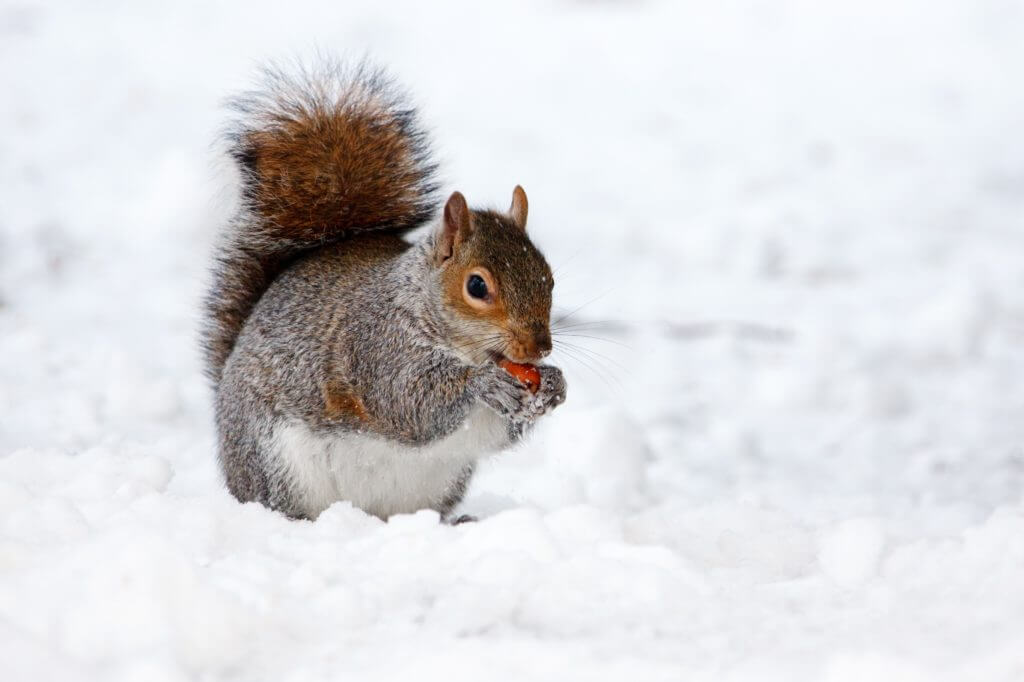 There is an old sugar maple outside our house with a lower branch that reaches out over the lawn. It is a perfect structure in many ways, stately and well-formed. I pamper this tree by enforcing No Parking near its root system and only tapping it for sap every few years. I mow around it carefully. In appreciation, the tree provides a lush canopy of shade in summer and hosts my birdfeeder in winter. I love watching birds of all stripe assemble around it through January. It is a little refuge from the frozen, seedless ground this time of year.

I am not alone in my appreciation of this tree. It seems that our neighborhood squirrels also adore this edifice, especially when it is baited with a birdfeeder that drips the occasional oiled sunflower seed on the ground. Every winter a bunch of these little rodents appear and take up residence around the maple. They pretend to appreciate me, but I know they actually just love my feeder. Most of them are witlessly oral, scurrying around with no concern other than stealing as much seed from the birds as possible. They are rude but just doing what they do to stay fed in winter. My dad used to say “Give to Caesar that which is Caesar’s” when the squirrels plundered his feeder, though he also taught me to look askance at their nefarious deeds.

We would all live in relative harmony were it not for Sherlock. Unlike his witlessly oral cousins, Sherlock has a clever little squirrel brain that thinks evil little squirrel thoughts. Instead of competing on the ground for droppings, he takes up residence on the branch from which hangs my precious feeder. And he watches, day in and day out, plotting how to launch a frontal assault and gorge on the very trough from which my seed is dispensed. Greed is in his eyes and lust is in his squirrely heart. I have watched Sherlock probe and test different strategies to defeat the conical metal hood, greased hanging wire and other anti-squirrel defenses I have built up over the years. He tries and fails, retreats to his branch, and studies anew. Sometimes I see him attack and fall hilariously to the ground, repelled and defeated. But then he’s back, watching, waiting. And if he has enough time, he will eventually figure out a way past my defenses, his own personal siege of Masada.

I have a measure of ambivalence toward Sherlock. He probably would feel the same about me if he knew more about that shadowy bearded figure in the window who watches him. He needs me to fill the feeder, and I need him to challenge and energize my benign ecological paradise with a dose of disruption. As he ponders his next move, so do I. My .22 rests nearby, ready to dispatch him to squirrelly never-never land, but I wait. I am reluctant to put an easy end to his predatory perch in the tree. Maybe he deserves his place in the tree more than I do as protector of all those birds whose food he plans to swipe. He sort of epitomizes that American tradition of individuality and personal success through effort, even at the cruel expense of others—Adam Smith perched in my tree. Maybe he deserves to rise above his nut collection and sip from sweet sunflower seed nectar. Maybe there is Darwinian justice in his survival over less ambitious squirrels. So what if some welfare-sucking bird comes up empty beaked tonight? Maybe Sherlock can become an avatar for all the ambitious hungry squirrels across the county.

I confess this is not my proverbial first rodeo with Sherlocks of the woods. Throughout the years I have fortified defenses, improved strategies and tried to prevent his ancestors from shinnying down my greased hanging wire to bird-seed glory. Some have succeeded, most have not. Some have become fatalities when they dangled too arrogantly from the feeder, offering me a fine target. But for reasons that probably have more to do with me than Sherlock, his fate should be different. I have respect for his diligence and persistence. I am not a hater, at least of squirrels, and this one seems to offer a lesson in humility for the bearded watcher who is very happy to be standing in a dry warm house. Would I be a January squirrel grubber down below or the one who climbs into the branches and waits for my big chance? I don’t know, but if I wait another day maybe I’ll figure something out from Sherlock. The .22 stays in the closet today.

When computer tech support is a scam