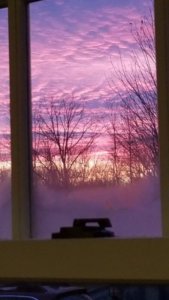 Photo of the Week: “Pretty in Pink.” By Maria Thurber, age 10 of Charlotte.

Sympathy is extended to family and friends of Sarah Ramsden of Prosper, Texas, who passed away November 27 at the age of 83. Sally, as she was known, was a Charlotte resident for a number of years, living on Mt. Philo Road. She served on the Charlotte Fire and Rescue Squad and worked with the Boy Scouts. Her surviving family includes her son, Randy, his wife, Karen, and their daughters, Audrey and Kerry, who live in Charlotte.

Sympathy is extended to family and friends of Joan Cawley of Burlington, who passed away Dec. 6 at the age of 87. Born in Massachusetts, Joan moved north with her husband, an educator who took a job in 1963 with newly formed CVU High School. They moved to Charlotte where they lived for the next 38 years. Joan was a customer-support representative for Charlotte-owned EatingWell Magazine and Camden House Publishing. The family suggests that those wishing to honor Joan’s memory consider sponsoring a family in need this holiday season.