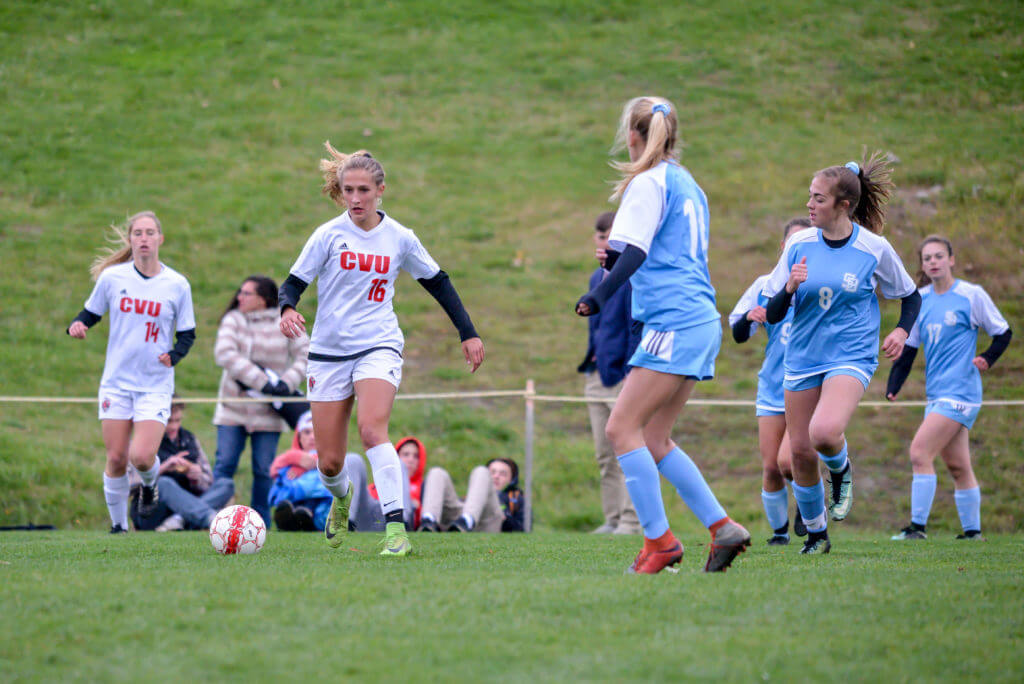 Natalie Durieux (#16) dribbles through the South Burlington defense in the Redhawks’ semi-final victory before their sixth-straight state title. Photo by Al Frey.

White and red claim women’s soccer championship
CVU women’s soccer capped an undefeated season with a 1-0 win over Burr and Burton Academy on November 4. It was their sixth straight title and 17th state championship overall. That’s right, “Soccer Central” lives up to its name once again. It was a close contest with strong defense on both sides until sophomore Charlotte Hill hit her team-best 21st goal of the season after the BBA goal keeper had trouble handling a pass intended for Hill from midfielder Ali Bisaccia. The goalie’s slight bobble gave Hill an opportunity to hit the net easily and cleanly.

Early on, Burr and Burton had hushed the Redhawk crowd with a free kick with less than 20 seconds to go in the first half that another sophomore, CVU goalie Marilyn Askew, stopped on a dive and kept the game scoreless until the final minutes.

Men’s Volleyball goes the way of the Redhawks
It did not look good for CVU men’s volleyball team after the first set of the state finals against Essex. The Hornets captured the beginning set of the match 26-24. But CVU came back, winning the next two sets 27-25 and 25-23. While set four again belonged to Essex, the Hawks finally put away the trophy, winning the fifth set 15-12. This was only the second year that volleyball has held varsity status, and its popularity has grown dramatically.

Redhawks and Hornets also in the women’s finals
This was the volleyball year for both teams of CVU and Essex to face each other. While the CVU men overcame a tough set of Hornets, the CVU women could not duplicate it. Last year’s reigning champion Redhawks managed to capture the first set of the match 25-21 but lost the next three 25-8, 25-19 and 26-24.

Redhawks turn toward Wolves in the field hockey final
From Hornets in soccer to Wolves in field hockey, CVU hit UVM’s Moulton Winder Field in the Division I state championship against South Burlington. The game marked a challenge for the Wolves since CVU had brought them their lone defeat this season. Much of the early part of the game occurred at midfield. The Redhawks managed one clear shot that the South Burlington goalkeeper kicked clear. The strong defensive play seemed to turn on the Wolves’ offense, and they scored the game’s lone three goals before halftime. Shots on goal show the defensive pressure South Burlington placed in the second half. They outshot CVU 10-2 in the first half, and the Redhawks managed only one more shot in the second session.

CVU had avenged two earlier defeats by Essex during the regular season and knocked off the Hornets in the state semi-finals by a 2-1 score in order to reach the championship game.

CVU men’s soccer gives way to the Hilltoppers in the state semifinals
The end of October saw the end of the Redhawk men’s soccer season, as they lost a semi-final match to St. Johnsbury, 2-0. It was the first trip to the finals for St. Jay, a team which eventually lost the championship to top-ranked South Burlington.

CVU grad led Castleton State University to NCAA tournament
With a goal in the second overtime period, former Redhawk Bronwen Hopwood led Castleton in a 1-0 win over Husson to clinch the North Atlantic Conference title. The Spartans traveled to Boston and faced MIT in the Division III NCAA tournament. A win by both Castleton and Middlebury would have brought two Vermont colleges together in the second round. However, Castleton dropped its match to MIT 7-2, ending its season.