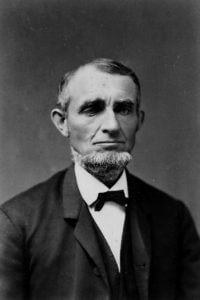 Jane Williamson of Rokeby Museum contacted our historical society about items she had received pertaining to the Dean family of East Charlotte that she felt were more appropriate to our museum. Included was a remarkable portrait album in a heavy leather binding, with gilded edges and a bronze hasp and lock. They were gratefully accepted, even though we have some work to do to identify the old photographs.

Using these items, here is a story about Lindley Richard Dean, born December 28, 1887 in Charlotte, which was revealed using as the starting point one of the items: his composition book for his freshman English class at Dartmouth in his first college semester in 1905.

Lindley’s father was James Richard Dean, born September 12, 1858, in Charlotte, and his mother was Mary Alma Collins (she went by “Alma”), born January 27, 1861, in Monkton, daughter of Lewis L. Collins and Louisa J. (Nye) Collins. One of the artifacts received from Rokeby is a quilt square she worked with her initials and an elaborate vining embellishment.

His grandparents were Joshua Meader Dean, born April 29, 1823, in Lincoln, Vermont, and Lucy Miles, born May 13, 1819, in Stanwell, Middlesex, England. It was the fusion of two Quaker families of East Charlotte and Monkton. Lucy was a daughter of Lindley’s great-grandparents Henry Adolphus and Mary (Hagen) Miles. Henry had been baptized Anglican, but at age 20 and after his father died, he became a member of the Society of Friends in England, emigrating to Monkton via Canada. In the 1840s Henry was a member of the Vermont Peace Society, an articulate Quaker preacher and author who in the 1850s founded the Vermont Free-Produce Movement to boycott all goods produced by slave labor. After the Civil War he became a leader in the Freedman’s Aid Society.

When Lindley’s parents were married, Henry and Mary (Hagen) Miles sent their grandson and new wife a letter (another of the items received) on December 30, 1881, expressing their joy in their own marriage of over 64 years and their prayers for James and Alma in their union. Unfortunately, it was to be a short union as James died in 1893 in his 35th year.

Lindley’s older brother, Lewis James Dean, never seemed to know what he should do after graduating from high school. He was a rural mail carrier in Charlotte for many years, married and moved to southern California where he took several jobs, including mail carrier, pipe fitter and caretaker at a public school. Lindley, however, was one of those rare souls who knew what he wanted to be from his earliest days—a teacher. In his first college essay for Mr. Emery’s English class, he wrote that he desired teaching to be his life’s work; he wanted to be a molder of youth. He went on to receive his Bachelor of Arts degree from Dartmouth in 1909, his Master of Arts from Princeton in 1910, and his Ph.D. in classical languages from Princeton in 1914.

He taught briefly at Princeton before being accepted at the American School of Classical Studies at Athens, Greece, where he was a fellow of the School of Archeology for 1914-1915. He returned to take a position as a professor of classical languages at Dartmouth. While at Dartmouth, he had to sign up for the military draft for World War I. Lindley continued in his great-grandfather’s footsteps when he claimed exemption from service as a conscientious objector due to membership in the Society of Friends.

Not surprisingly he transferred to a similar position at Earlham College in Richmond, Indiana. Earlham College is a private liberal arts college established in 1847 by the Religious Society of Friends. Here he met and in 1920 married fellow teacher Belle Wierman Bream from Gettysburg, Pennsylvania. He taught at Earlham from 1918 through 1921 when he became the Eliam E. Barney Professor of Classical Languages at Denison University in Granville, Ohio, where he served from 1922 to his retirement in 1963 at age 75.

Lindley Richard Dean fulfilled the dreams of his Charlotte childhood to be a life-long teacher and helped shape the lives of thousands of youths; he died as a professor emeritus in Granville, Ohio, on May 20, 1976, in his 89th year, and is buried with his wife in Evergreen Cemetery in Gettysburg.