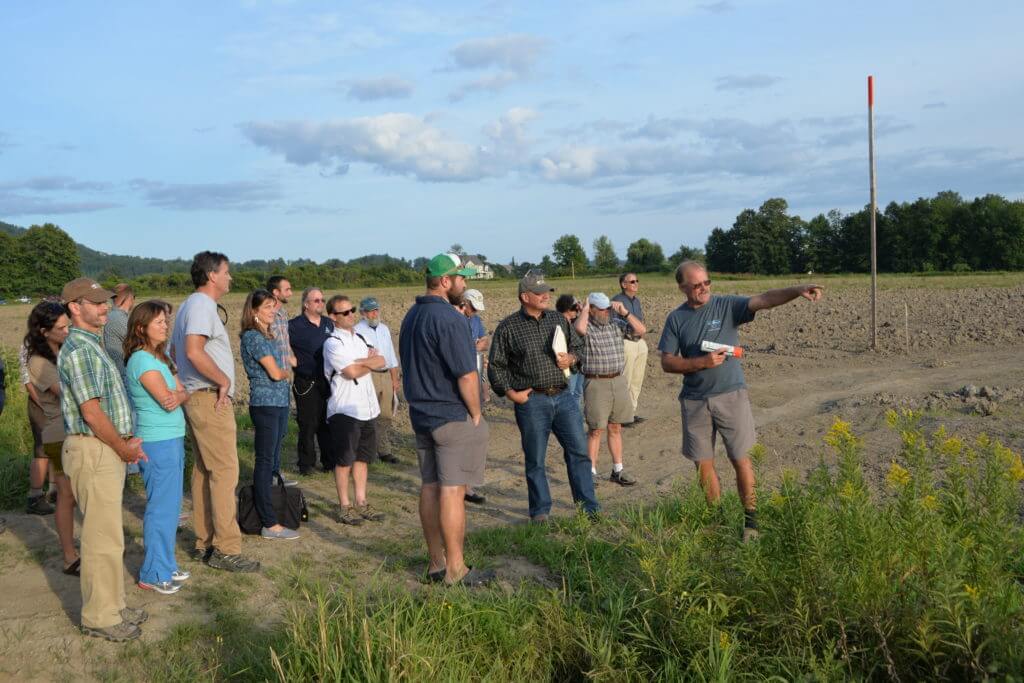 At the site visit prior to the Selectboard meeting on Aug. 28, Mt. Philo Hops neighbor Peter Demick expresses concerns about the new holding pond excavated near his land. Photo by Lynn Monty.

A crowd of prospective farmers, concerned neighbors and town officials gathered at Mt. Philo Hops on East Thompson’s Point Road to try to resolve fermenting tensions over their farming operations on Aug. 28. Though they have yet to put a single hop plant in the ground, just the prospect of things to come has been enough to put a bitter taste in neighbors’ mouths.

Some neighbors fear the farm will put undue stress on aquifers, drying up their own wells, and spread contaminants throughout their properties. 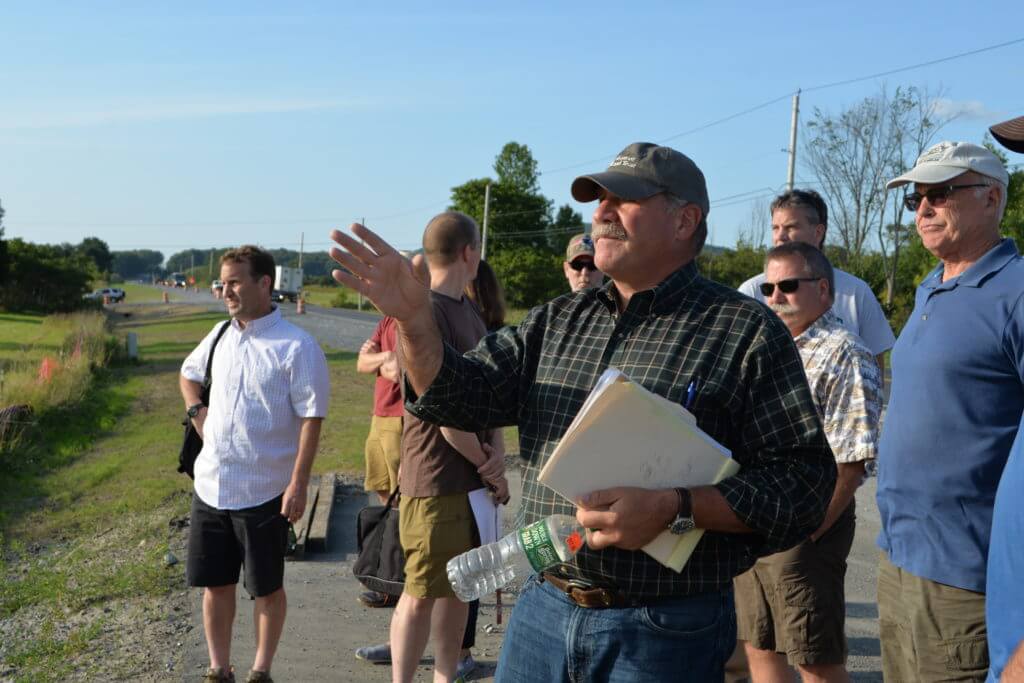 At the site visit in Charlotte on Aug. 28, Mt. Philo Hops owner Peter Briggs explains how views will be obstructed from Route 7 after the crop is planted in the spring. Photo by Lynn Monty.

If the site visit on Monday was intended to put those fears to rest and smooth relations, it seemed to have failed. When the gathering transitioned from the farm to Charlotte Town Hall for an open forum, it was clear that rancor remained.

The persons behind the operation, owner Peter Briggs and farm manager Julian Post, were on hand to explain their plans and answer questions. Other experts came out in support, including representatives from the Vermont Agency of Agriculture and the Vermont Land Trust, and several members of Vermont’s farming community. Experts explained that the farm was in legal compliance and that, with conscientious farming practices, neighbors had little to fear. 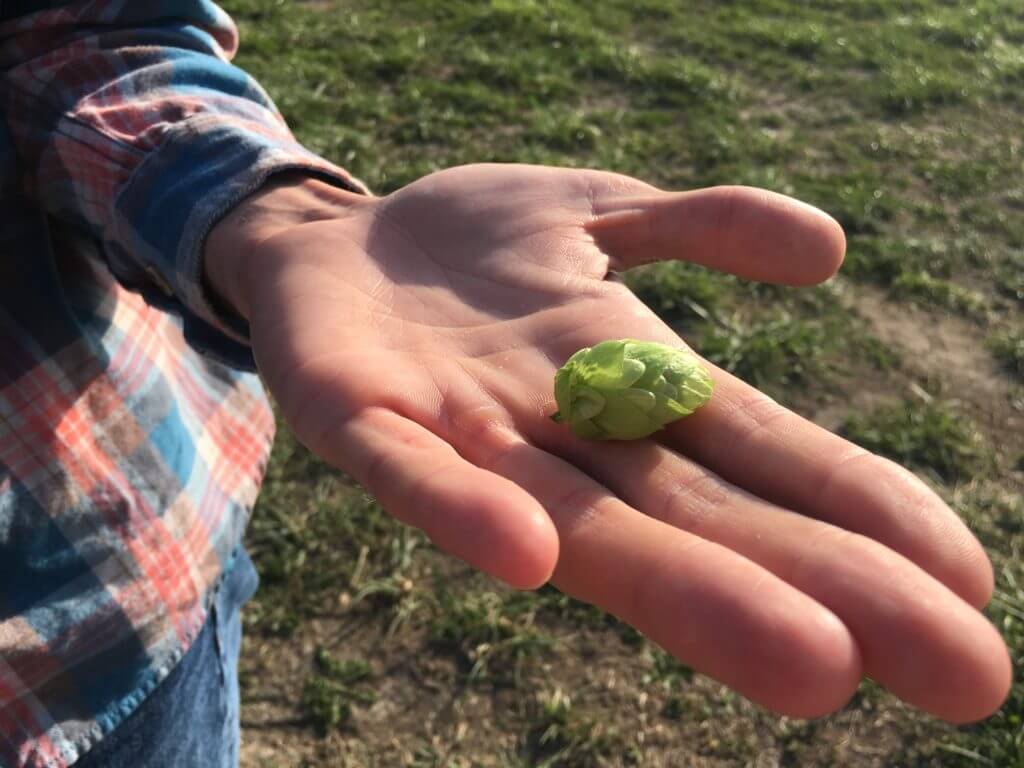 Hop farmer Julian Post brought hops to the site visit of the Mt. Philo Hops farm in Charlotte on Aug. 28. No hops have been planted on the site. The hop in this photo is from another local farm. Photo by Lynn Monty.

Though no pesticide plan is legally required, Briggs and Post are in the process of drawing one up because said they want to do right by their neighbors. “We hold ourselves to a higher standard than compliance,” Briggs said. “We’re going to keep people safe. And if we cannot figure out how to do that, we will not grow hops on this piece of property.”

Briggs’ professional life lies in NYC, but he comes from a long line of Vermont farmers. He says bringing hops back to Vermont would represent a return to roots for Vermont agriculture, as the state was a top producer of hops in the US during the 1800s. But that’s as old-fashioned as Briggs wants to get; he’s interested in progressive practices.

A big part of Briggs’ plan includes hiring the right people, which is why he brought Post on board back in April. Post has a strong agricultural background and comes directly from UVM’s Extension Northwest Crops and Soil Program and is a certified applicator of pesticides and fungicides.

But residents say the farm has been poorly planned and stands to threaten their quality of life. They put together their own presentation, citing reports and studies about chemical sprays drifting on the wind and the harm certain chemicals can do to aquifers, ground water, insect life—particularly bees—and most importantly to their families.

Aside from proper application, Briggs and Post plan to introduce other measures to ensure neighbors’ safety, including planting trees to act as drifting buffers. One neighbor, Susanna Kahn, was dissatisfied that the trees would not immediately match the 18-foot height of the hops poles. When Post said, “I don’t think I can afford to buy 18-foot trees,” Kahn shot back, “I don’t think I can afford to be sprayed on.” 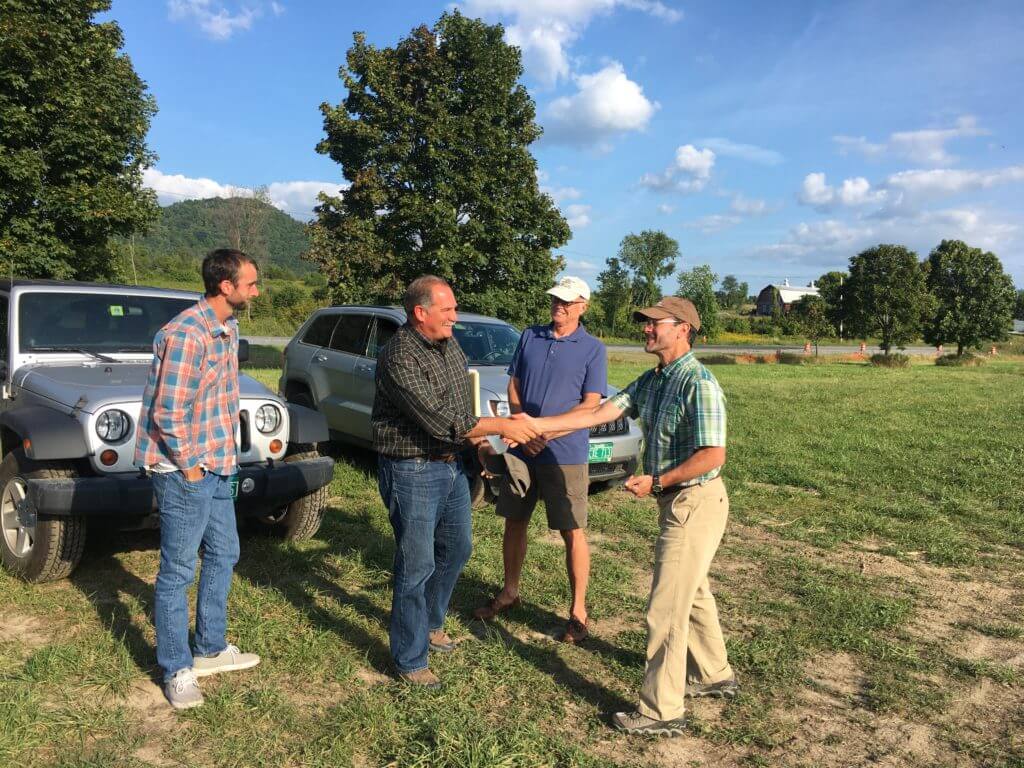 After neighbors complained that a strong south wind would blow pesticides onto the organic farm and houses next door to the hops farm, Nick Cowles, the owner of Shelburne Orchard, said spraying is a regular part of his business and that a responsible and trained farmer, like Post, is savvy enough to keep drift away from neighbors. “I am able to control sprays, and the changing wind is a friend,” Cowles said.

Post pointing out that a hops farm requires far less spraying than an orchard. “We fight fewer pests at hops farms than they do at apple orchards.”

The sentiments were hardly comforting to attendants. Derek Chace, who lives with his wife and daughter in a property abutting the farm, came to the Selectboard meeting with his infant daughter. He wanted to know if the town had a plan for when his well dries up, his property value plummets and his daughter has cancer or special education needs as a result of long-term exposure to chemicals. “Who will pay?” he asked. “Electra and I are guinea pigs.”

Peter Demick, who owns a neighboring farm, was concerned about the holding ponds that were dug on the hops farm. Demick said he was told the ponds would be 25 feet from his property, but once dug were only 9 feet, and that proximity would mean any overflow—and any fungicide contaminants—would spill onto his property. “Keep your water off my land,” Demick told Briggs and Post. “It’s an ill-designed pond with improper drainage.”

Not everyone was there in opposition. A number of individuals came to speak in favor of the hops farm—though they often had to weather interruptions and outbursts to make their points. One young woman, a representative of the Vermont Young Farmers Association called for the townspeople to have a “more stable perspective” and said, “I implore you to listen to the experts.”

Stephen Kiernan expressed dismay, saying Briggs and Post have been vilified by everyone. He took the townspeople to task for their treatment of the hops farmers. “As I watch how people have behaved, I know who I would want living next to me.”

He added to his comments after the meeting, “I think some of the people who are neighbors of the hops farm are sensible, concerned activists, and I celebrate their exercising of their rights. But some others are behaving horribly.”

Carrie Roberts, the representative from the Vermont Agency of Agriculture, Food, and Markets, advised neighbors to carefully consider their approach to the problem. “This is your town. You all have to be neighbors. Keep an open dialog.”

Selectboard schedules special meeting for May 27