Best in show with Crangold Kennels

Best in show with Crangold Kennels 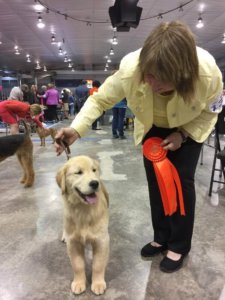 Crangold Kennels in Charlotte is owned by Kathleen and Daniel Kehoe. The two grew up in South Burlington and started married life owning a duplex home in Shelburne. After five years, five golden retrievers and two children, they wanted to move where they had more land.

They used to come to East Charlotte to train their dogs to retrieve on land and water and fell in love with a piece of property on Bean Road, Kathleen said. Eventually they purchased 21.6 acres and built the home they live in today.

“Our life has always been centered around our dogs, so pretty much everything we do is because of the dogs,” she said. “A vacation for me is probably going to Golden Retriever Club of America National Speciality.”

The last national speciality she attended was in Asheville, North Carolina, which had an entry of more than 1,000 goldens from all around the country. “I brought two dogs, Scout and his daughter Lola, and both came home with ribbons,” Kathleen said. This year she will be going to Maryland in late September with two dogs.

Breeding goldens keeps Dan and Kathleen busy year around, from researching a proposed future breeding to raising a litter of puppies, training a puppy for competition, and owning a stud dog that is actively used for siring litters. “Our Scout recently had litters born in Colorado and Tennessee as well as here in Vermont and Canada,” Kathleen said. On a smaller scale, they also do all-breed boarding, mostly sporting and mixed breed dogs, and limited grooming, mostly golden retrievers.

Dan as a teenager bought his first golden retriever female puppy and named her Rusty. Shortly after Dan and Kathleen married, Rusty was hit by a car and killed at the age of two. The couple wanted another golden and found a litter of six-week-old puppies in Hyde Park ready to go. “We paid $100,” Kathleen said, “and brought home a male puppy and named him Shanon.”

By the time Shanon turned two they found out that he had hip dysplasia. “This is when my passion for learning everything I could about golden retrievers began,” Kathleen said. “I started learning about health issues and learned most golden litters in this area were not X-raying the breeding stock. We started buying our golden puppies from golden breeders out of state that had hip clearances done on both parents.”

And after eight years of learning about goldens they bred their first litter. Today they have seven goldens that are from seven months to almost 11 years of age. They have two to three litters a year and have people from all parts of the country contacting them for a puppy or for breeding to Scout.

Since then they have bred and owned several golden retrievers that earned their American and Canadian champion titles. Kathleen has received the AKC Breeder of Merit. She bred and owned both parents of a female that has become a certified New England search and rescue dog on land and water.

Kathleen tells people that there is more to a golden then the color or the fur, that it should be health, longevity and temperament over color (goldens range in color from almost white to a very dark reddish gold). For health clearances you will want certification from the Orthopedic Foundation for Animals that the parents have hip, elbow and heart clearance, as well as get yearly updated eye clearances on dogs used in a breeding program.

Only sound-tempered dogs should be used in a breeding program. “I study pedigrees on health, longevity and temperament and choose a male for a proposed litter that I hope could complement my female and hopefully produce some outstanding, beautiful healthy puppies,” Kathleen said. “My philosophy is to better the breed, and I only want to produce goldens that are healthy, well-tempered and have that true majestic look of a golden retriever. I want to produce a puppy that could easily become a therapy, hunting, agility, obedience, conformation or a companion family pet. The sky’s the limit on what you can do with a golden.”

Plan ahead if you are considering a golden puppy in your future. Crangold Kennels is already being contacted for puppies in 2018. Once you take your puppy home from a breeder, continue that relationship with your breeder throughout the life of your dog. Many breeders offer things well past the sale of the puppy, whether it is puppy rearing advice, grooming or a place for puppy to stay if you go away, Kathleen said. Finding a good veterinarian is as important as finding a good breeder because they will now be taking care of your pet’s health. It should be a team of the breeder, veterinarian and you, the dog owner for a lifetime.

For more information visit Crangold Kennels or send an email.

Property transfers for Oct. and Nov. 2021