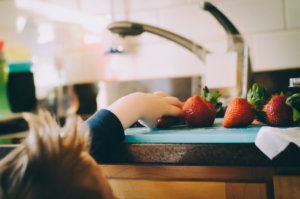 We have let Noah out of the giant play pen we once called a living room, which consists of his toys and a couple of chairs. He had been happy with this arrangement for months, until last week, when he began standing by the gate yelling and often dragging his sippy cup across the bars. We had no choice but to let him out.

The first time we gave him free rein of the house there were really no problems. I was doing the dishes. Noah crawled into the kitchen and watched me load the dishwasher. Then he found the drawer filled with Tupperware and was happy to play with that for the rest of the evening. This is great, I thought; he didn’t even get into the other cabinets. This won’t be so bad after all. I am not sure why, when you become a parent, you begin to think such irrational thoughts as He’s happy with that one kitchen drawer; I don’t have to worry about the others. But you do, and it causes nothing but trouble.

The next morning, very early the next morning, I was sitting at the table trying to write when I heard a loud crash from the kitchen. Noah had discovered another cabinet and had pulled out the vegetable steamer and two cake pans, which he proceeded to bang together, bang on the floor and bang on the cabinet. It was so loud I thought the roof was falling in. I directed him back to the Tupperware drawer, blocked the cabinet with the garbage can and went back to stare at my coffee cup. By the time I sat down he was at another unprotected cupboard and had pulled out our rather large cheese grater. I dashed into the kitchen and carefully pried it from his hands. Placing a bench in front of that cabinet, I went back to my cold cup of coffee. Later that day, with most of the dishes piled on the counter so that Noah could not get to them, I thought it might be time to childproof the cabinets.

The locking of the cabinets turned out to be the least of my worries. My memory is the greatest threat to keeping Noah from getting into things now. I will put him down and off he will race for the open bathroom door. I am always amazed at how fast he can crawl—or maybe it’s how slow the neurons in my brain are firing due to lack of sleep. Regardless, he is already into the bathroom before I have gotten out of my seat. This pattern continues until I have managed to get everything out of his reach and all doors are closed. Then the cat starts to meow and look around for his food and I inadvertently leave a door open. The cycle is repeated again, often several times throughout the day.

One would think that with all the laps that Noah does around the wall that separates our kitchen and living room, coupled with the throwing of Tupperware, he would be worn out. But his energy level seems only to increase while mine has gone into a nose dive. When he was immobile and not sleeping more than a few hours, I thought I could not get more tired, but then he began to move, then crawl, then pull himself up and reach for things. I figure by the time he starts walking I am going to need a second coffeemaker to have enough energy to keep up with him. At least I am getting my legs in shape for ski season with all of the squatting, jumping out of my seat and sprinting I am doing to grab things out of Noah’s hands.