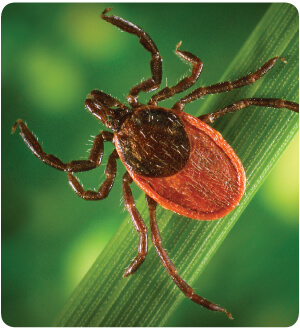 “Epidemiologic data suggest that the actual incidence of Lyme disease could be as much as 10 times higher than CDC data indicate. This probably is the result of a restrictive case definition for the CDC, inevitable misdiagnosis and the fact that physicians tend to underreport reportable diseases of all kinds,” Jonathan Edlow, M.D., Harvard Medical School. Courtesy photo.

Lyme disease is caused by a particular bacteria, called a spirochete (spir-o-keet). These are some of the most ancient bacteria on earth, having been around billions of years longer than humans, and they are very clever. There are over 200 different species. The word spirochete means coiled hair, as that is what they look like under a microscope. There are eight different genera, some of which can be harmful to humans. The organism that is causing the Lyme disease in the US is Borrellia burgdorfei. All of the Borrelia species are pathogenic—that is, they will cause disease.

Lyme spirochetes resemble a corkscrew-shaped worm that invades its host’s blood stream and then finds its way to the connective tissue sites, in which they colonize by screwing into and multiplying in the tissue. Sites such as the knees and aqueous humor of the eye, most joint tissues, spinal column, the heart tissue and the brain, all have the perfect viscous medium. The spirochete, being highly mobile, move around and colonize. A bio-shield or film encapsulates them and makes them very difficult to detect and to treat. Like many pathogenic bacteria they alter themselves rapidly, and because of excessive antibiotic use, they have become resistant to most antibiotics. Unfortunately, Lyme spirochetes can rapidly rearrange their gene structure to hide from antibiotics, while at the same time avoiding the host’s immune systems.

Once the tick larva, about as small as a period at the end of a sentence, attaches and releases its saliva into the host’s blood stream, a series of complex reactions begin; basically, it inactivates the host’s innate immune system. The spirochetes alter themselves in a variety of ways to enhance the potential infection. Some 37 changes to the outer protein membrane of the spirochete have been so far found to occur. Lyme spirochetes are exceptionally good at rapidly altering their structure in order to evade the host’s immune responses and to better the chance of colonizing different parts of the body.

Lyme spirochetes love collagen tissues, i.e., the joints, aqueous humor of the eye, the meninges of the brain and other collagen sites like the skin, and heart tissue. Typically, they live deeper within the tissues than most other kinds of bacteria. Lyme infection, like many chronic conditions, produces an imbalance in the Th1 and Th2 immune complexes. These T cells are the helper cells for the immune system. There are three stages of Lyme: early, early-disseminated and late. Early detection is within the first few days or weeks of infection. The middle stage is when the disease begins to spread but is not yet entrenched. Late stage or chronic is when it has penetrated many parts of the body and has established itself as a chronic disease.

Lyme’s progression is markedly different for each infected person. Treatments vary depending upon the stage. As time goes by, the organisms adapt themselves to the person they inhabit and adjust to the immune response in that individual. They also alter their genotype, making their offspring more viable to continue to colonize the host. Early detection is the easiest to treat, while the more advanced stages take longer and need a stronger antibiotic regime. At this time, there is no cure for late-stage Lyme, and many experts are using a combination of an herbal protocol and antibiotics. Antibiotic treatment is standard within the first weeks of contraction. Homeopathy and other herbal protocols have shown to be helpful in all stages of Lyme disease. Obviously, there is a lot to learn.

Sallie’s Safety Tips
Prevention is the key. If you go into the tall grasses or woods, always tuck pants into socks, wear a hat with hair tucked in, and wear light-colored clothing to make it easier to spot the ticks. Take off all clothes down to underwear before entering the house. Place all clothes in a plastic bag and tie off. Place clothes in a hot dryer for 20 minutes. Go take a shower. Do tick checks every day on all members of the family, even your pets. A sticky lint roller by the back door can also help remove any critters clinging to your clothes.