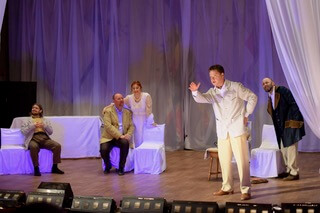 The Burlington Yaroslavl Sister City program will host a delegation from Yaroslavl, Russia, celebrating the “Days of Russian Culture” from April 18–24. Courtesy photo.

The Burlington Yaroslavl Sister City program is a nonprofit group promoting the exchange of people and ideas between Burlington, Vermont, and Yaroslavl, Russia. Continuing a long tradition of cultural exchange between the two cities, Burlington will host a delegation from Russia celebrating the “Days of Russian Culture” from April 18–24.

The group will consist of three officials from the local government of Yaroslavl, the chair of the Russian American Friendship Association and a 16-member theater troupe, here to put on two performances of Chekhov’s The Cherry Orchard. This is the largest delegation Burlington Yaroslavl Sister City (BYSC) has ever hosted other than the Torpedoes hockey team (now Lokomotiv) that came over in the 1990s to play UVM.

The Atmosphere Theater Troupe will give a full performance—in Russian with English subtitles—of The Cherry Orchard at Burlington High School on April 20 at 7:30 p.m. The performance will be free and open to the public.

A more intimate reading of the play, again in Russian, will take place at Middlebury College on April 21 at 7:00 p.m. in Chateau 005. There will be time for a Q&A with a translator after the performance.

Between performances the delegation will visit local education institutions and businesses and meet local people. This exchange would not have been possible without the support of many local businesses and organizations. The Hotel Vermont and the Courtyard by Marriot deserve special thanks for sponsoring the delegation’s housing. Other organizations that have helped with venues, food, tours or logistics include B.good, Burlington High School, City of Burlington, Church Street Marketplace, Farmhouse Group, Flynn Theatre, Manhattan Pizza, Middlebury College, RiRa Irish Pub, Short Stop Deli and The University of Vermont.

This trip comes after an official delegation from Burlington visited Yaroslavl in October 2016. The delegation consisted of Burlington City councilors Adam Roof and Sara Gianonni and BYSC board members Alex Bunten, David Seaver and Martie Majoros. While there they took part in the “Bridge over the Ocean” festival, met with local officials and were joined by the U.S. Ambassador to Russia.

For more information, send an email.