Voices from the Women’s March

Voices from the Women’s March 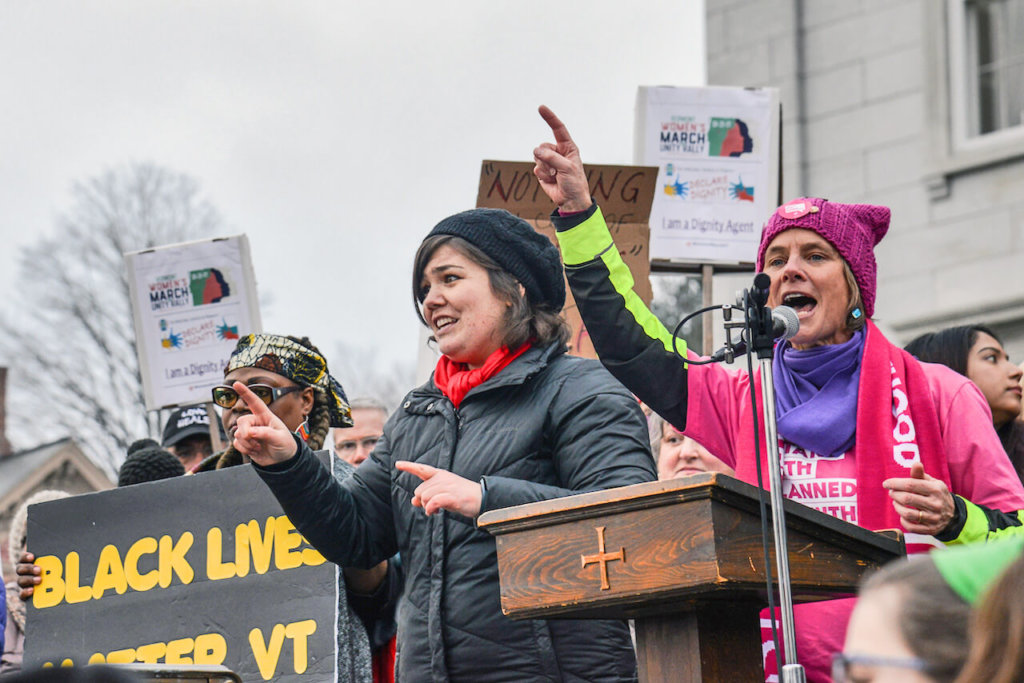 Former VTRANS Secretary and gubernatorial candidate Sue Minter speaks to the crowd with help from a sign language interpreter at the Montpelier Women’s March on Saturday. About 15,000 people attended which prompted interstate exit closures due to overcrowding. Photo by Tom Remp.

I’d never seen so many people crowding the streets and the lawn of the Statehouse in Montpelier as I did on Saturday, Jan. 21, when an estimated 15,000 citizens offered a “Love Trumps Hate” alternative to the frightening future portended by the recent U.S. election. The Women’s March was historic not only for Vermont, but also for the planet. I felt in solidarity with hundreds of thousands in Washington D.C., as well as millions around the country and around the world, who gathered to send a message of hope and determination.

To march with so many people for women’s rights as human rights, and then to include the rights of all humans and all that lives on the planet, was life-changing. The crowd’s songs and chants were joyful. Their many imaginative hand-written signs—some serious and some hilarious— were heart-warming. Thousands of us wore pink “pussy hats” as a pointed rebuke to DJT’s appallingly abusive speech and actions toward women. The hat I wore was one of many that had been knitted for the occasion by my neighbor Sandy Schofield, who wasn’t able to attend.

I asked some Charlotte and Monkton residents who had gone to the march what the day had meant to them.

John Howe: I went to the march to be in community with other Vermonters who value gender, racial, and economic equality and to challenge the agenda of the Trump administration. This was a women’s march and so I went there to show solidarity, to make a statement, as a man, that women’s rights are important for all of us.

I marched with my sister Jane. We often held hands and did a lot of hugging. We greeted friends with warmth and kindness. Madeleine Kunin’s speech from the Statehouse steps brought tears to our eyes. We had talked earlier about our mother who, like Kunin, pioneered in traditionally male professions. My mother’s ghost was with us and it felt good. About 15,000 people attended the Women’s March in Montpelier joining more than a million people who marched worldwide the day after the inauguration of President Donald Trump, in defense of human rights. Photo by Tom Remp.

Wolfger Schneider: I attended the Women’s March in Montpelier somewhat reluctantly. You see, I grew up in Germany during WWII and have had to carry the burden of my birth country’s history of crowd support and mass chanting of support for political leaders.

What made this march different, though, was that it was largely about what we would like this country to be; it was about values, dreams, and actions all beautifully expressed in dress, artful signs, music, and speeches. Yes, I got into it, felt emotional, sang and even danced a little. Not bad for a 76-year-old proud to have been able to support the march.

Dora Coates: I loved was all the fantastically creative signs. Let me tell you, women are a force to be reckoned with once they get going. One said, “Hell hath no fury like 157,000 women scorned!” written in a burst of flames. There were many men standing for their women, which was heartening. My friend’s sign got a lot of notice because it was different. She’s been deeply crushed by Trumpism, and her message was,”Stand Strong America with your Broken Heart.”

To me it was a real solidarity moment, and I just wanted to observe, absorb, and be part of it. We all want to keep active during this Trump term. Bernie Sanders made a surprise impassioned speech to the crowd, which of course screamed at every pause.

Nancy Goodrich: We rode over on a train of outrage, floated back on a joyful cloud of hope. We embraced victory when we saw the pictures of fellow marchers filling the streets in cities all across our county and around the world! Yes, ‘Love Trumps Hate’ and ‘Joy Trumps Despair.’  And, yes, we need to keep riding that train of outrage, but it sure felt good to step off for a little bit!