The rain is dripping on the picnic table and the air is misty. I can always see Mt. Philo in the distance from my window here, but today, not even a little bit. The dogs are leaving footprints all over the kitchen and tennis is not happening. But I love these rainy days.

I have read a stack of good books lately — perhaps a bit fewer than I might have had I not gotten myself immersed in the Netflix series “Ozark.” It is (though dark and frequently brutal) outstanding. I have been telling people who have not yet seen it (most have, it’s been out for a while) that it takes a few episodes to get into, to get to know the characters enough to become invested and engaged in their stories and willing to wade with them through their complicated and increasingly danger-riddled lives. I know this is not a book, but it’s so good I had to mention it. I just finished the last season and am trolling for a new series. So far, there’s nothing close to filling its shoes. I’m kind of in mourning. 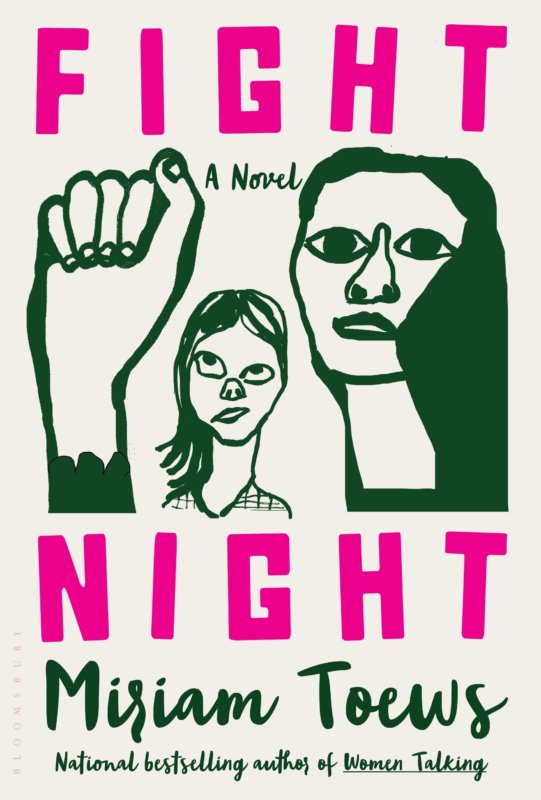 But anyway … on a more literary note, Miriam Toews’ Fight Night is a masterpiece. It was a book club pick — I’m not sure I would have discovered it otherwise. The frontispiece by John Steinbeck reads, “An odd thing is that sadness does not necessarily become greater with age.” It’s a perfect mini-intro to this very unusual story, wherein we meet the character of Grandma (Elvira) who, though old as the hills, is one of the most lively, colorful, inventive, big-hearted, unpredictable, delightful older people ever to grace the pages of any book ever.

The book is written as a letter to Swiv’s father, who is absent as absent can be from the novel and her young life, but “Dear Dad,” she begins, “How are you? I was expelled.”

The main characters are three females — three generations — who “stand alone, together, against the universe, so closely molded against one another’s jagged edges that their individual outlines blur” (Nadja Speigelman, The New York Times, Oct. 3, 2021). There’s Swiv. And then there’s Swiv’s pregnant and probably bipolar mother (diagnosis: mine), an actress, who frequently “goes scorched earth,” rocking the household and the lives of all within her erratic orbit with her moods. And then there’s Grandma.

“Grandma says fragments are the only truth. Fragments of what? I asked her. Exactly she said.”

“Grandma skips over pertinent details because she’s got five minutes left to live and doesn’t want to waste it on the small picture.”

Why is the book called Fight Night? Good question.

Swiv writes, towards the end of the book, “Fighting means different things for different people. You’ll know for yourself what to fight. Grandma told me fighting can be making peace. She said sometimes we move forward by looking back and sometimes the onward can be knowing when to stop.”

I think if you read this book, you will agree with me that Elvira steals the show (as does Ruth Langmore in “Ozark”), in her velour track suit, with her cannabis oil and compression socks, ramblings and exclamations (“Ball game!” “Fun and games!” “Hoooooooooooo”), giving writing assignments to her family, singing, memorizing trucker lingo, charming cab drivers, befriending airport security, playing online Scrabble, spraying passing police cars with a garden hose.

Some of my favorite parts of the book take place in airports during Elvira and Swiv’s trip to visit relatives Lou and Ken in California. On the way out, Grandma makes fast friends with the cab driver, commandeers a wheelchair, uses the men’s washroom: “She sat back down and put the suitcases back on her and we went into the men’s washroom past confused males washing their hands and right into the giant handicapped stall. The airport guy is gonna follow us in here! I said. Grandma was already sitting on the toilet saying hoooooooooo. No problem! said Grandma.”

A bit later, the airport security woman discovers farmer sausage in Grandma’s suitcase and tells her she will have to check it. Sausage can’t fly internationally. Grandma resists. The sausage is Lou and Ken’s favorite food. Finally, Grandma agrees to hand over the sausage, and then the security woman admires Grandma’s nail polish, and then they have a long conversation about vegetarianism and carnivores, and in the end, Swiv writes, “The woman told Grandma and me to have an awesome time in the raisin capital and to bring home the sunshine. She waved her scanner at us and Grandma saluted her.”

At one point, on the way home, Swiv loses control of Grandma’s wheelchair “and Grandma went shooting off down the ramp. Wow! she was shouting. She said things in her secret language. Na oba heat ex sigh! She was picking up speed. I ran to catch up with her but that stupid red purse strap got tangled around my waist and then Grandma hit a f&*%ing Body Shop stand with her wheelchair. The stand fell over and cream and soap bombs flew everywhere. A man tried to grab the handles on the wheelchair but he missed and she went flying past him. It looked like she might tip over onto two wheels. I was running. I heard Mom calling my cellphone. I knew it was Mom from the ring tone. It was a song called ‘Fever.’ Finally Grandma stopped beside a water fountain that was just the right height for a person in a wheelchair to have a drink. Grandma leaned over and had a long drink of water, then she sat there smiling calmly as if this had been her final destination all along.”

I want so badly to give you a taste of how excellent and engaging and rollickingly good this book is. It makes you ponder, it warms every atrium and ventricle of your heart, it tickles your funny bone, and the next thing you know, tears are streaming down your face and you’re aching with the terrible poignance of it all. Without a doubt, Grandma is a force of nature — bigger than life and fear and death that has a weird way of coming for us all in the end.

In the fight of life, Grandma gives her all. She gives us her all. I miss her.