The taste of fall was in the air at Philo Ridge Farm, but it was just the merest flavor of autumn, as the day was still summery enough for meeting outside on the evening of Thursday, Sept. 15. 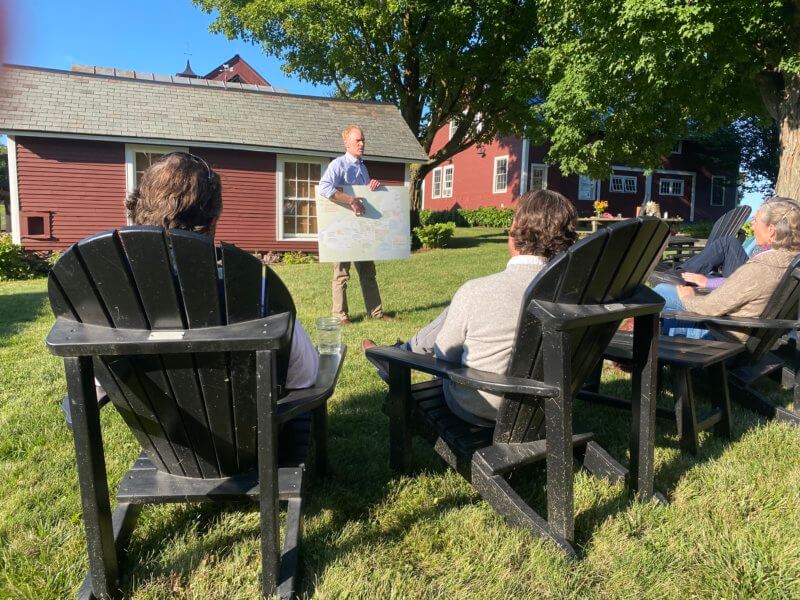 Photo by Scooter MacMillan. Rob Riley of the Northern Forest Center shares his organization’s mission and vision with a group at Philo Ridge Farm.

There was a bounty of taste in all sorts of appetizers that came in a steady parade as the farm’s kitchen strutted its gourmet game, with products grown on the farm or nearby, for a group of about 25 as they discussed projects to help the region transition from an agricultural economy to an economy that will hold and attract younger people.

The occasion was an event sponsored by the Northern Forest Center, a 25-year-old nonprofit based in Concord, N.H., working to revitalize communities in the region designated as the Northern Forest, 30 million acres stretching across northern Vermont, New York, Maine and New Hampshire.

It was formally recognized as a region by Congress in 1988 and is the largest forested region in the eastern United States.

The Northern Forest Center has identified 10 communities — Tupper Lake, Keene and Elizabethtown, N.Y.; St. Johnsbury and Newport, Vt.; Lancaster, Gorham and Bethel, N.H.; and Greenville and Millinocket, Maine — to concentrate on projects generating “investment capital and philanthropic funding to accelerate positive change to attract and retain the next generation of families and entrepreneurs,” according to materials from the organization.

Tim Volk of Charlotte, a board member of the Northern Forest Center, discussed how the work of Diana McCargo and Peter Swift at Philo Ridge Farm exemplifies the ethos of the organization.

Rob Riley, president of the organization, said one of their main questions is: “How do we really incentivize and create and help communities be more competitive for young people?”

As McCargo and Swift have done with their farm, Riley said the Northern Forest Center looks to invest and engage with places in ways that have “a ripple effect and a leverage opportunity.”

“There’s community that results from risk-tolerant capital that’s come in to invest in a place,” Riley said.

He complimented Philo Ridge Farm and its store for offering a gathering place where people interact with other farms in the area: “That’s what makes the Northern Forest community home, that we have a vibrant community, not just a nice building.”

One of the projects Riley and the organization have been working on is a renovation of an 11,000 square-foot building from the 1860s in Lancaster, N.H. The building required a lot of work and basically had to be gutted. It was not only uninhabited; it was uninhabitable.

“Let’s just say ‘eyesore’ is a generous statement,” he said. “It was a weird purple color.”

It did have historic significance as the place where cough syrup and the sugar-coated pill were developed.

The project was four years of struggle for the organization, but in June, the building officially opened with six two-bedroom apartments and spaces rented to a doctor, a nurse and the superintendent of the school system. A food marketplace and a commercial kitchen are on the verge of moving in.

Lots of reclaimed wood from the original building was used in the renovation, and 80 different contractors worked on it, which served as economic stimulus.

One of the investors in the project was a man who pulled his money out of his retirement funds.

“I’m inspired by people and the idea that other people are also willing to be risk tolerant,” Riley said. “The day and age of someone else doing it for us is done in my opinion. It’s about digging in, and I think that’s how we broaden that table to let other people be part of that.”

Lila Thorne, director of development, said when she started with the Northern Forest Center four years ago, it had a $2 million operating budget. The organization found on many projects it needed capital in hand to compete in the real estate market. The problem with relying on grants is it often takes months after an application is submitted before money is dispersed.

“So, we started asking individuals and foundations and businesses for basically super-low interest loans we could call impact investments that were like five years at 1 percent interest,” Thorne said.

A year ago, the board set the fundraising team a goal of raising $30 million. In a year, they have raised half of that, Volk said.

About $20 million of that $30 million is going to be investment capital, which we’re going to return,” Volk said. “About $10 million of it is philanthropic.”