For Jamey Gerlaugh, the move to Charlotte with his wife Mavis in 2017 was a blessing, after what he described as the craziness of their previous home in the Washington, D.C., area.

Looking to be part of his new community, he saw a Front Porch Forum post from Sustainable Charlotte (then called Transition Charlotte) about their upcoming Repair Café.

“I thought that looked cool,” he said. “I like fixing things and consider myself fairly handy.”

And he had always been curious about ways to make communities work more smoothly and efficiently. 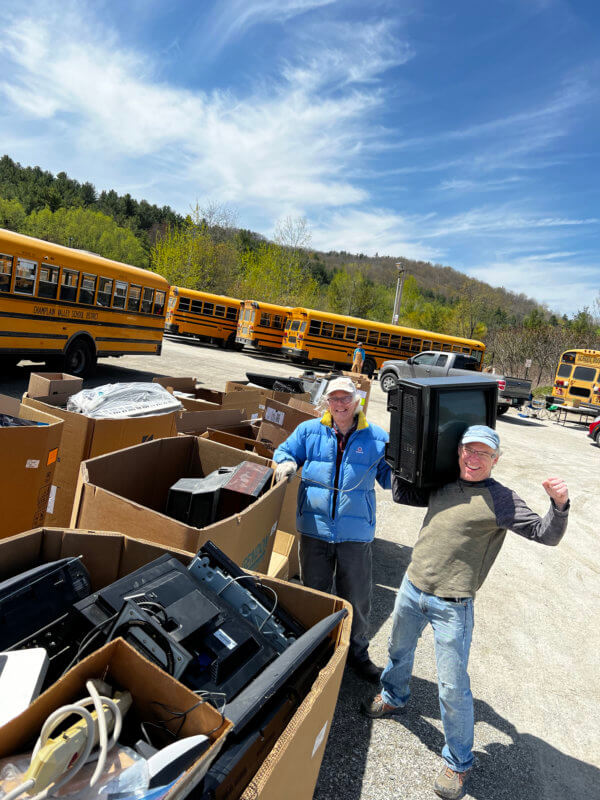 Courtesy photo. From left, Wolfger Schneider and Jamey Gerlaugh collect e-waste during Green Up Day for Sustainable Charlotte, which sends the electronic waste to be recycled by a company in Middlebury.

Gerlaugh joined Sustainable Charlotte, and after taking part in the Repair Café, he was asked to take charge. He’s been running it ever since. The next event will be 10-11 a.m. Oct. 8 at the Charlotte Congregational Church.

Looking for more ways to help his community, Gerlaugh contacted WindowDressers, a regional organization which brings people together to produce low-cost insulating window inserts. He called the director who said that they had been thinking about expanding into Vermont. In 2019, Charlotte became one of four new WindowDressers communities.

The first two “community builds” were at the Grange but the next one will be held in late October at Earthkeep Farmcommon.

“It’s a grass-roots attack on global warming issues right here in our communities,” Gerlaugh said. “It provides a great benefit for people to save money and stay comfortable.”

Grants are available to subsidize the window work for people with low to moderate incomes.

Gerlaugh started his career as an electrical design engineer in the aircraft industry.

After obtaining a master’s in environmental management at Duke, he joined a fellow alumnus in working to find economic opportunities for rainforest communities so the residents could make money while keeping the forests intact. The pair collaborated with settlers and farmers to make educational kits of rainforest seeds for teachers.

“We wrote the educational materials for the classrooms,” Gerlaugh said, “and did the packaging and marketing at trade shows.” Other exports included natural chewing gum and artisan products.

“It was a non-profit that worked on eco-tourism in five counties,” he said. “Our biggest project was 150 miles of canoeing and kayaking camping trails through swamp forests using camping platforms. You can see otter, beaver, bear, deer and owls.” The trail was recently taken over by the state and is now called the Roanoke River State Trail.

From North Carolina, Gerlaugh traveled to Maryland and a start-up called Verdant Power which worked on underwater tidal turbines. After 13 years, he and his wife began to worry about her parents who lived in Vermont and decided it made more sense to move closer to them than vice versa.

When he first moved to Charlotte, Gerlaugh worked as the sustainability director for the Ceres Farm. “It was a great submersion and education in local farming and what it takes to maintain a farm infrastructure,” he said. “You could say I was the farm repairman, which was actually a very satisfying respite from the screen and desk jobs of engineering.”

These days, Gerlaugh is an engineering consultant for Efficiency Vermont. Initially, he worked on residential projects, helping builders and homeowners. He visited homes, took part in Zoom calls and provided information for people calling the organization’s hotline.

Recently, he has begun working on lighting programs for commercial establishments and schools. He helped Charlotte Central School convert old fluorescent lights to LEDs and put in smarter control systems.

Lately, Gerlaugh’s efforts have moved to a new area. “Cannabis legalization is coming in October,” he said, “and indoor grow operations are proving to be some of the largest energy consumers in the state.”

Gerlaugh explained that indoor cannabis growers use heavy, intensive lights which generate a lot of heat. Windows can’t be opened because of fear of contaminants so the growers use air conditioning, even in winter. The plants need at least a gallon of water every day and when they transpire, the moisture in the air requires dehumidification.

“We want to make them as efficient as possible,” Gerlaugh said. “So, we offer consultation and will do whatever we can to make them more energy efficient.”

Gerlaugh has lived in nine different states, but he is pleased to be making his home in Charlotte.

“My wife and I pinch ourselves each morning,” he said. “We knew it was the right place when we found ourselves starting up conversations with strangers at gas stations and grocery stores. That kind of friendliness is rare these days.”