Vermont’s only malthouse is quietly undergoing a massive upgrade, right here in Charlotte.

Set back at the end of the Earthkeep Farmcommon driveway, Vermont Malthouse is located in a former dairy barn, massive in size, large enough to double its operations and house other businesses, including House of Fermentology. Upgrades to their steep tanks, heating system, chiller and a flaker system will enable Vermont Malthouse to increase production and offerings to the local and regional brewing market. 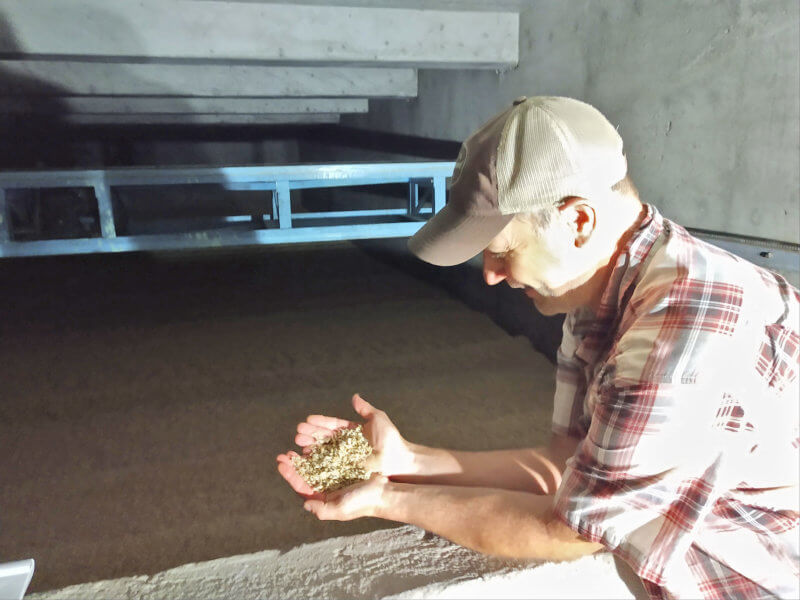 “We are safety-minded while working to become a world-class malthouse,” said Rob Hunter, general manager of Vermont Malthouse.

The day of the tour they were bagging finished product, the air dusty yet humid with the smell of grain. The visit included chance meetings with other staff including Jamie Dragon, head maltster, who was busy monitoring their current batch of barley malt.

While highly scientific, the nature of the malting process consists of a few simple steps: the grain is steeped in large tanks, soaked and split open, then dropped into a heating chamber. Once the grain is at the right temperature and moisture level, it’s kilned, cleaned and bagged. The malthouse does this every two weeks, producing barley malt used as base for pilsner-type beer.

“It’s the most used malt. It doesn’t impart the colors, but our new systems will allow us to do a proper pale ale, a proper Munich, a proper Vienna,” Hunter said.

He showed off a shiny new row of steep tanks, used for the first time last week. 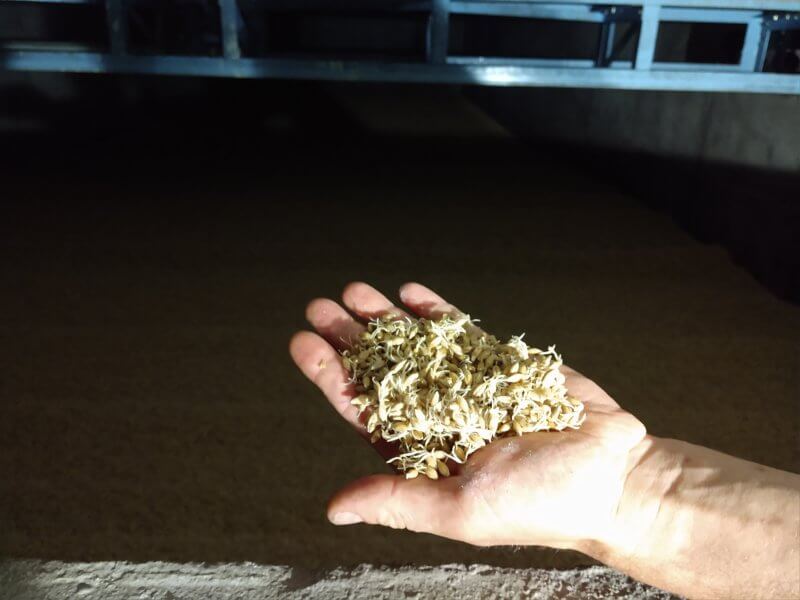 Photo by Juliann Phelps. A handful of germinated barley.

“I haven’t been excited about something like this for years,” he said. “It does so much for our morale, for our mindset. It’s something that can stand up to the best.”

Previously they were using a large-scale version of a custom maple sap tank with a curved bottom and outlets on the sides, making transfer of product difficult if not dangerous. The new tanks are capable of steeping one ton of grain apiece, with new carbon dioxide extraction, aeration fans and bottom outlets.

“These are three big wins, as steeping is the most important step,” he said.

After two days of steeping, the outlets on the steep tanks are opened, dropping the grain onto a germination floor, which is also a heating chamber. This dark, warm, enclosed room contains a large heating, ventilation and air conditioning system and series of monitoring sensors.

The grain is dumped into a large cement “bathtub” where an auger slowly turns, separating the rootlets that sprouted in the warm climate.

As the grains slowly germinate Jamie, the head maltster, checks the sensors every two hours for the next six days, monitoring humidity levels and temperature. 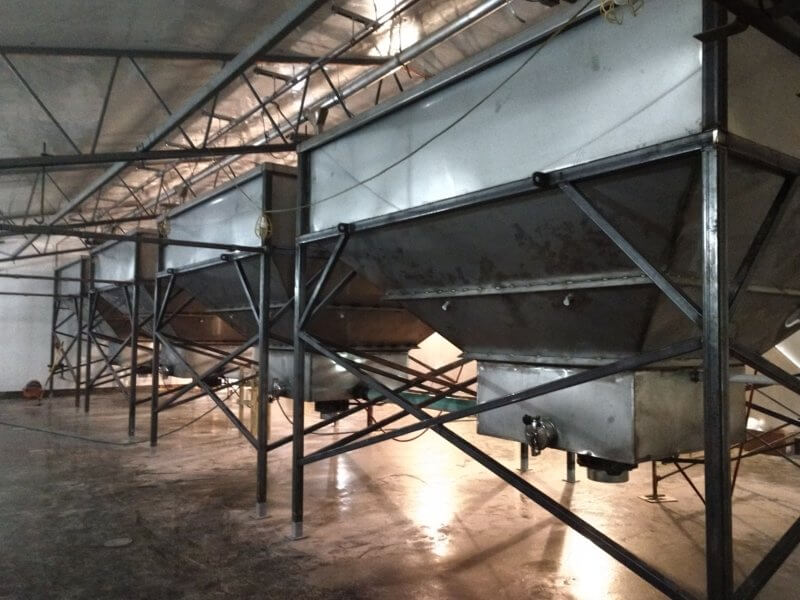 Photo by Juliann Phelps. Newly installed steel tanks on the top floor of the Vermont Malthouse.

Temperature is important in the malting process. Hunter said in the warmer months the malthouse is challenged to keep the grain at the ideal temperature of 60 degrees during the germination process. Their second upgrade, a new 80-ton chiller system, will only be used a few months of the year but will circulate much cooler air under the grain than the current HVAC system. Once most of the grain has germinated, it gets dried and cooked at a high temperature, called kilning. The third upgrade, a 100-percent efficient heat recapture system, will kiln the grain at 240 degrees instead of the current 180. This will allow the malthouse to kiln different grains at the higher temperatures required. The hot air halts the germination process, breaking down the grains into usable sugars for yeast. After kilning, the malt is sucked out of the room and into a de-comber where it’s cleaned and dumped into 1,500-2,000 pound “super sacks.”

The last and possibly most interesting upgrade is the flaker. It’s an unassuming piece of equipment behind a large dividing wall, independent from the malting process. The availability of flaked barley (or wheat) will be another game-changer for the business.

In this process raw grains are used, which are steamed, cooled and rolled — putting the starch of the grain on the outside in a process called gelatinization. Hunter describes it as making oatmeal: “You put the hot water on your oatmeal and the dry oats become a creamy texture.” When it comes to flaked grains, “it’s all about mouth feel.”

You would think with all the upgrades in process, Vermont Malthouse would rest on its laurels. Instead, Hunter spoke of even more upgrades and opportunities.

The flaker process could be used to flake corn used in finishing beef cattle.

They may invest in a small batch system which would create dark malts for stouts and porters or experiment with grains like kernza, a type of wheatgrass.

“I think Jamie is excited about getting creative,” said Hunter.

While in appearance it may seem like a sleepy red dairy barn nestled against fields of rye, inside Vermont Malthouse is wide awake and innovating.