Born in 1983, American novelist Maggie Shipstead is author of a few books — Seating Arrangements, Astonish Me, Great Circle, and You Have a Friend in 10A (a recent collection of short stories). All are excellent. 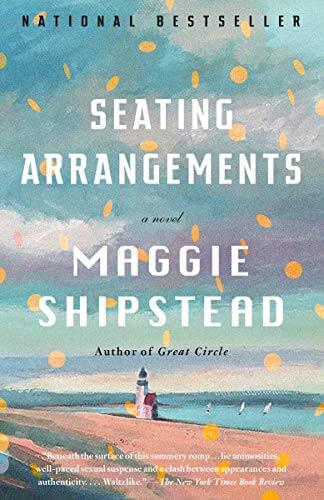 Seating Arrangements is about a family wedding on what seemed to me a thinly disguised Nantucket Island. (I wrote about it in a prior article.) It won the Dylan Thomas Prize and the Art Seidenbaum Award for First Fiction in 2012. Great Circle, Shipstead’s third novel, was shortlisted for the 2021 Booker Prize and for the 2022 Women’s Prize for Fiction.

When she isn’t writing, or perhaps even when she is, Shipstead can often be found traveling the world. She is a frequent contributor to the magazines Condé Nast Traveler and Departures (which I regularly receive in the mail and typically hurl straight into the Charlotte Post Office recycling bin — but now that I know Shipstead is a contributor, I might not be so quick to fling).

Great Circle takes place in two time frames, 100 years apart. In one, we find Marian and her brother growing up in Montana in the home of their artistic, well-intentioned and frequently inebriated uncle. 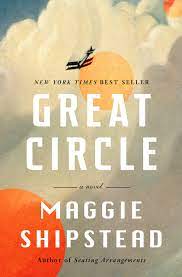 Where are their parents? Good question. Their mother Annabel disappeared from her stateroom on a sinking ship and their father is incarcerated because he failed to go down with it. It’s a long story, but basically, young Marian becomes obsessed with flying after a pair of barnstormers (The Flying Brayfogles) pass through town and show their stuff in the sky overhead.

Over the years, she hustles her way to becoming a pilot herself — not an easy journey back in the day. We follow her story as she pursues her dream of circumnavigating the earth by flying over the North and South poles.

“I was born to be a wanderer,” reads her logbook (Little America III, Ross Ice Shelf, Antarctica, March 4, 1950). “I was shaped to the earth like a seabird to a wave. Some birds fly until they die. I have made a promise to myself: My last descent won’t be the tumbling helpless kind but a sharp gannet plunge — a dive with intent, aimed at something deep in the sea. I’m about to depart. I will try to pull the circle up from below, bringing the end to meet the beginning.”

And then, fast forward to a century later, to Hadley Baxter, an actress with a problematic wild streak and some major scandals orbiting her name, chosen to play Marian in a movie about Marian’s mysterious disappearance somewhere off the coast of Antarctica, one leg short of completing her voyage. Rather ironically, Hadley’s parents died in a small plane crash when she was a toddler, and she was also raised by an oft-drunken uncle. Over 600 pages, this is a long book. Full of complex characters, adventure, drama, a good deal of well-researched information about female aviation, with a theme running throughout of women pushing out into new realms, expanding outward rather than contracting to fit sexist stereotypes and expectations.

Beautifully written, thoughtful, dynamic and utterly unique. Bring it with you on a trip. That’s what I did.

I preferred the parts about the past over the more contemporary sections. But I highly, highly recommend this, along with everything else Maggie Shipstead has written.

Fierce Little Thing is by a Vermonter — Miranda Beverly-Whittemore, recipient of the Crazyhorse Prize in Fiction — and is another excellent read for summer, or any season. A tad creepy, but maybe that’s just me — cults have always given me the willies.

Like Great Circle, this novel is extremely well written and hard to put down. It begins on a rooftop. Picture two children. The little boy is making his sister promise to tell him a story.

“I promised 50 times already,” says the older girl. “As soon as we get on the highway, I’ll tell you the longest, weirdest story.”

“You lifted your tiny finger in front of me,” the book goes on. “You wobbled on the banister, then dropped your hand to steady yourself. Below your feet lay four stories of air.” And so begins — well, kind of “the longest, weirdest story,” certainly one unlike any I have read before. As in Great Circle, we again find children navigating a world without parents, or with highly eccentric parents, or with highly eccentric (and sometimes temporary) caregivers, forging relationships with an array of adults and other children, some benevolent, some not so much.

Saskia, the girl we meet in the beginning of the book on the roof with her little brother, ends up as a teenager at a Maine commune called Home. I don’t want to give too much away here, but ultimately Home becomes a place Saskia is compelled to be, despite some pretty eerie dysfunction and general weirdness going on.

This is a drama and also a mystery. It becomes the latter when a much older Saskia is living apart from her old friends, walled off in an old house from society and life in general, and is rather precipitously wrested from premature retirement by some mysterious missives, which make it necessary to reconnect with old pals and revisit Home and some dark, secret deeds of the past. I loved this book. Highly recommend.

I’ll leave you with a final page-turner. The Last Thing He Told Me is a New York Times bestseller and recent Reese Witherspoon Book Club pick, but don’t let any of that impede you from picking up this short, fast-paced mystery about a missing husband and father and his wife’s desperate quest to find out what the heck happened to him. Clearly the guy wasn’t who he said he was, but she still loves him. Wherever he went and whoever he truly is, he left behind his 16-year-old daughter Bailey, who basically wants nothing to do with her well-intentioned (and fortunately quite resourceful) stepmother.

Trust me: You are not going to be able to put this one down. Everyone to whom I have recommended it has agreed: It’s a great read. My son’s girlfriend recently brought it along with her on a family trip and was told by her sister that her obsession with whatever it was she was reading was downright annoying. So, read at your risk.

Besides a gripping plotline, the evolving relationship between the doubly abandoned stepmother and daughter is touching and very well-rendered.