This will be the fifteenth year Woody Keppel has been the artistic director for Burlington’s Festival of Fools, continuing a lifetime in entertainment including performances as Woodhead, his alter ego.

Growing up in Virginia, Keppel was surrounded by music. His mother was a children’s theater director and his grandmother had been a vaudevillian.

“We put on ‘South Pacific’ in our basement,” he said. “Entertainment was always in my blood.”

Keppel was a child prodigy on the piano but his first performance, in front of upperclassmen, turned into a disaster when he had to be pulled off the stage by his teacher after freezing at the keyboard, unable to get past the first seven measures. 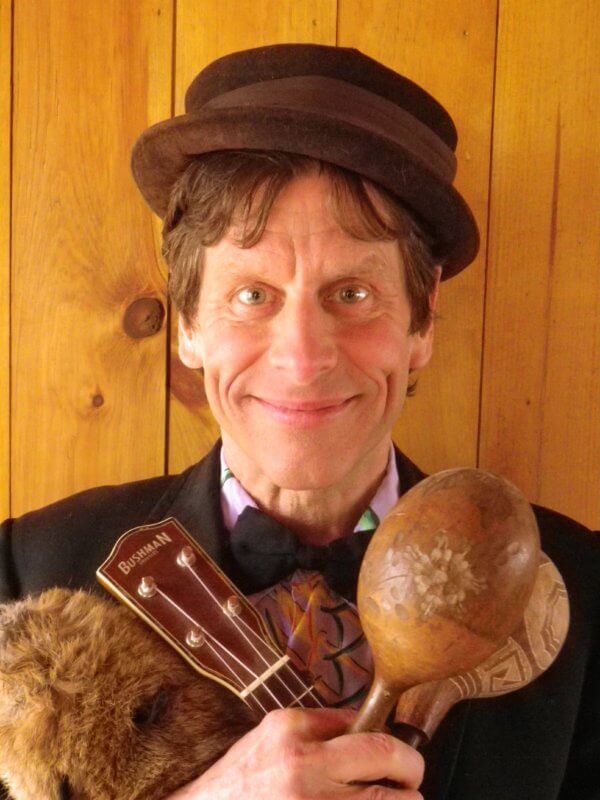 It took four years before he returned to music after listening to a neighbor play Beatles tunes on a four-string guitar. Keppel purchased a six-string guitar at the age of 16, mostly to learn Cat Stevens and Neil Young songs in the hope of impressing a pretty girl who had just moved to the neighborhood.

Keppel majored in music at Virginia Commonwealth University, but after graduating he decided to try his hand at acting with Sarah Caldwell’s opera company.

“That started the idea of me being physical on stage,” he said.

Several years later, while in New Orleans, he met a street performer who juggled under the name Waldo. Keppel had already created his Woodhead persona and was hoping to do physical comedy. He and Waldo teamed up and performed as a duo in New Orleans, Key West and at Faneuil Hall in Boston.

On their way to perform at the Montreal Jazz Festival, the pair stopped in Burlington and did an impromptu performance on Church Street.

“We got a massive crowd and people were really generous,” Keppel said. Several years later, he made the move to Vermont.

For two years, Montpelier had a festival called Fool’s Fest which gave Keppel the idea of creating a Burlington event.

“I had just come back from the last Festival of Fools to be held in Amsterdam,” he said, “so I proposed the idea to Burlington City Arts.”

Keppel is excited about the acts which will be part of this year’s festival from Aug. 5-7.

“Vaudeville used to be our national pastime,” Keppel said. “Burlington once had seven vaudeville houses. It was a cleaned-up derivative of burlesque and cabaret.”

For the last few years, Keppel has been performing in a trio known as the Hokum Brothers, but this year he will be bringing Woodhead back for the first time in 10 years, working with another performer as Two Fools and a Mule.

Keppel will also be reviving the Scautaqua movement which originated in upstate New York during the heyday of vaudeville.

“It went from town to town with music and social commentary,” he said, “but it also brought doctors, philosophers, news of the day and public debate on issues.”

Keppel said the onset of talking movies put an end to the festivals, but the spirit of vaudeville returned with television comedians like Redd Foxx, Lucille Ball, Sid Caesar and Fannie Brice. Keppel is looking forward to recreating the movement.

“We’ll be taking our band of merrymakers and performers to seven communities in Vermont,” he said.

On July 24, Keppel announced the start of a new career. He will be running for governor as an independent.

“I’m going to run as Woodhead,” he said. “He’s my place of freedom and a reminder for people of what it was like to be a kid. His alter-ego, Woody Keppel doesn’t have as much fun as he has.”

Keppel’s interest in politics dates back 25 years to the production of the movie Woodhead Saves the Farm. In that film, Woodhead jumps on a runaway tractor to save the life of Senator Patrick Leahy.

“I won the highest bravery award and Leahy gave me a medal,” he said, “and I’ve wanted to go into politics ever since.”

Keppel admits that Woodhead’s platform of bringing people together may sound trite, but he is committed to that cause.

“I’ve performed for people from all walks of life,” he said. “It’s best when it’s affordable and the street is that way. That’s how politics should be.”

Keppel is also concerned about keeping Vermont’s natural world intact and is serious about focusing on that issue and the importance of Act 250.

“This isn’t an ego thing,” he said. “It’s something I was asked to do because people close to me believe in the simplicity and fun of Woodhead.”