Three of Champlain Valley Union High’s football players will be joining the rest of Vermont’s gridiron best against New Hampshire’s allstars in the annual Shrine Game.

Kickoff for the contest at Castleton University will be noon on Saturday, Aug. 6.

Canty will be playing inside linebacker for the Vermont defense. He was a three-year starter at Champlain Valley and captain both his junior and senior years. 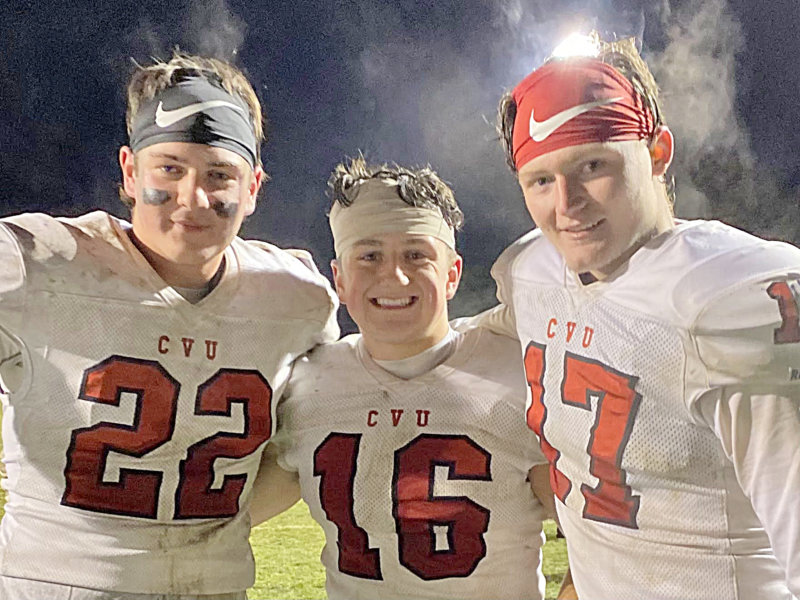 Canty “is a ‘no matter what’ rather than an ‘as long as it works out for me’ kind of young man,” coach Rahn Fleming said. “Determined and stalwart as a linebacker, he is also the inspirational fire for every other Redhawk on the field with him.”

Carroll will be playing at outside linebacker and/or running back. His coach said Carroll has a motor that never stops and was a unanimous choice of his teammates as a captain his senior year.

“If a mad scientist were to concoct the perfect mind/spirit combination for a young athlete, they could do no better than what nature gave us in Angelos Carroll,” Fleming said.

Anderson will be playing cornerback for Vermont and he was also a captain his senior year.

Fleming said his defensive skills were so high that in game planning, he put Anderson on the best receiver for all of their opponents. “Then we’d set about figuring out what we were going to do about the other 10 guys on the field.”

The Shrine Maple Sugar Bowl Football Game is one of 30 Shrine football games played across the country every year. The game is preceded by a spectacular parade of Shriners from throughout the Northeast Region, according the game’s website.

“Strong Legs Run That Weak Legs May Walk” is the motto of every Shrine Football Game.

The Shrine Maple Sugar Bowl has raised over $4.5 million dollars over 68 years for Shriner’s hospitals. These hospitals provide care for children up to the age of 18 with special health care needs and conduct research to discover new knowledge that improves the quality of care and life of these children and their families.