You could be mistaken for thinking it’s early spring as you gaze at Pease Mountain: bare tree branches in a haze of green as young leaves push out. What’s going on in July? A scourge has descended upon our town — spongy moths, formerly known as gypsy moths, have been consuming their favorite foods — leaves of oaks, birch, poplars and conifers. They also savor apple trees.

There is a bit of good news: “I’m encouraged to see reflushing,” said Chittenden County Forester Ethan Tapper of the re-growth of leaves he sees on many trees. “That is a good sign. If a tree is healthy, it can survive one or two years of defoliation. Mortality starts to kick in the third year.” 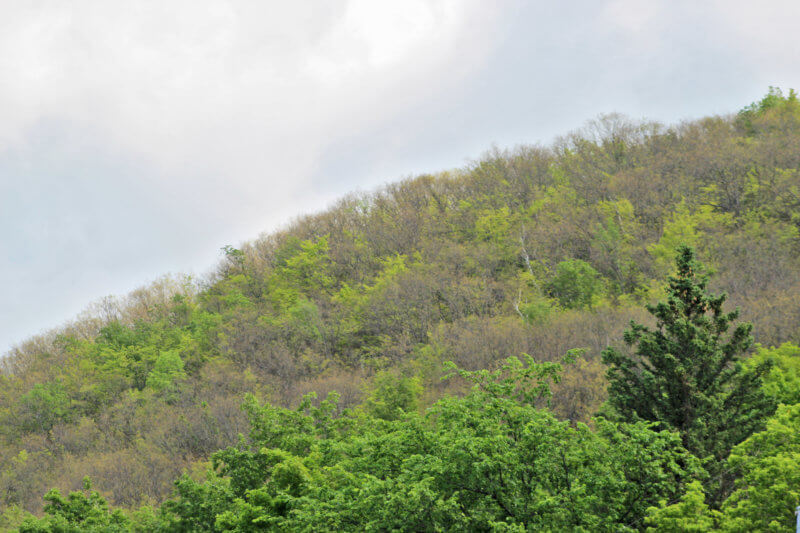 Photo by Scooter MacMillan. Large patches of trees with dead leaves blacken the side of Pease Mountain.

Tapper adds that hemlock trees are particularly vulnerable. “In Milton last year, some hemlocks succumbed to spongy moths. If a hemlock is one-third defoliated, it usually dies.”

Other relatively good news: There’s only one generation of spongy moths per year in this climate. When the caterpillars pupate, the defoliation is over. In addition, they are an early season visitor, which gives the trees time to put out new leaves.

This exotic pest, Lymantria dispar dispar or spongy moth, was introduced accidentally to the United States about 150 years ago. Historically, infestations have occurred in Vermont about every 8 to 10 years. We have had a reprieve, however, as the last major outbreak was in the early 1990s.

In 2020 there were a few reports but 2021 saw moths across the state. Tapper said that infestations are generally in the same locations as last year. Charlotte is an exception. Mt. Philo was badly hit last summer. This year the moths have migrated a few miles north to Pease Mountain.

Populations usually collapse after two to four years. Natural enemies that attack spongy moth eggs, caterpillars or cocoons include white-footed mice, some birds, predatory insects or mites and parasitoids, which are specialized wasps or flies. Photo by Sheri Larsen. Spongy moth caterpillars trapped below a sticky band and ready for picking at Airport Park in Colchester.

Two naturally occurring biological controls can also come to the rescue and one or both appear to be at work locally this season. “We have had more reports this year of the fungus and virus that attack the caterpillar,” Tapper said.

Native to Japan, the fungus Entomophaga maimaiga was introduced to the northeastern United States in the 1900s as a biological control for spongy moth. Its spores overwinter in soil or on tree bark and will germinate in May or June with moisture and high humidity. Frequent rainfall in May and June can lead to robust growth of the fungus. Caterpillars ingest the spores as they consume leaves. The fungus grows inside the body and can kill a caterpillar within a week.

“You can tell it was the fungus; dead caterpillars appear upright on the bark, a section of their bodies collapsed,” said Tapper.

The naturally occurring virus is nuclear polyhedrosis. Caterpillars ingest the virus and it then destroys their internal organs. Dead and dying caterpillars hang limply like an upside-down U. The cadavers liquefy and disintegrate rapidly, producing a foul odor. The virus is present to some degree in all spongy moth populations. The stress of competing for food and resting space intensifies when the population peaks during an infestation, making the caterpillars more vulnerable to nuclear polyhedrosis.

The dynamics of the two diseases differ. The spongy moth nuclear polyhedrosis is not affected by spring rainfall or temperatures and is seldom prevalent until spongy moth populations reach very high levels. In contrast, E. maimaiga may kill spongy moth caterpillars even when populations are low, but only if weather conditions are favorable.

What can we do?

Keep your eyes open, especially if you have oak trees. You will surely notice if you have an invasion of leaf-chomping caterpillars. An adaptation to outsmart birds and other predators makes the caterpillars vulnerable to trapping. They devour the leaf canopy by night and descend to hide in leaf litter and bark crevices by day. This gives humans an opening to capture and kill them.

The University of Vermont extension service recommends wrapping an 18-inch-wide strip of burlap around the tree at chest height. Tie a string around the center and fold the top portion down to form a skirt, with the string acting as a belt. Caterpillars hide beneath the burlap. Pick off the caterpillars daily and submerge them in soapy water or alcohol. If you are prone to allergies, cover your skin before collecting these critters — seems like a good idea in any event.

Another physical block is a sticky band or duct tape that can be installed on the trunk and lower branches of high-value trees. When caterpillars crawl up the trunk, they get stuck and die.

Removing egg masses is another important step in conquering the moth. The eggs overwinter and hatch in the spring, so removing them between August and May will reduce infestations the following summer. Each egg mass can have 50 to 1,500 eggs, so this is a worthwhile step. The masses appear on the bark of trees and can be removed with a scraper and, like the caterpillars, killed by submerging them in soapy water or alcohol.

Check the website for Vermont Forest Health Department, for more detailed information. The department will conduct an egg-mass survey this fall and the results will determine recommendations for next year.

So, trap those caterpillars and crush those eggs. We have a job to do to protect our trees.