By Linda Hamilton and Dave Quickel

Yes, Virginia, there is a Santa Claus and he comes to Charlotte. But did you know that there is a particular gift that only we can give? It’s the gift of support for local agriculture.

Farms are a strong component of the working landscape we live in and love. Farmers are our neighbors. We all have a stake in their success because they contribute to the increasingly important supply of regionally produced food, fiber and value-added products. And they could hardly be in a more important business, because we all eat every day.

Sure, we still have access to somewhat fresh and storable processed food from elsewhere. The best of both worlds, right?

Not really. Loud alarm bells have gone off about the true costs of industrially produced and processed food — costs which have been paid by consumers for years without our realizing it. Damage to our soil, water, air, human and animal health, and destruction of small-scale agricultural economies have mostly been accepted without holding those responsible … well … responsible and made to stop harmful ways of doing business. 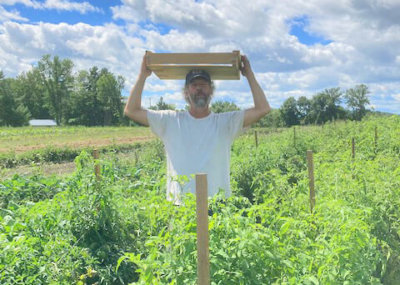 To make matters worse, government policies and subsidies, which are supposed to protect the public interest, have instead yielded to intense lobbying pressure from big agribusinesses. Conventional agriculture in the U.S. since the 1950s has been molded by these forces. Farms went from being producers for a regional and national market to being under contract with corporations dealing in “commodities.”

Why would they do that? Incentives. These started when companies that produced chemical components of warfare in the 1940s thought up something to switch to after World War II: chemical fertilizers, pesticides and herbicides. They incentivized farmers to use these for short-term boosts in production.

Tragically, this put farmers on a treadmill almost impossible to get off. These chemicals damaged soil health and fertility and wiped out natural predators of pests, making farmers dependent on reapplications.

To offset some of the cost, they were persuaded to put more land (or animals) into production, with single crops on larger fields, and to invest in larger equipment. This pushed many farmers’ debt to unbearable levels, leaving few options but to sell out. Thus began the steady loss of small- and medium-sized family farms and the rise of large farms under contracts with large agribusinesses. This industrial approach to agriculture became so influential by the 1970s that Secretary of Agriculture Earl Butz famously advocated that farmers should “get big, or get out!” It was no longer about working with the land to produce the nutritious food we need; now it was about how much profit non-farmers could make from “agriculture.”

What does this have to do with Charlotte? Quite a bit, actually, because we are fortunate to have a strong set of small- and medium-sized farms still producing food (and forage, fiber and value-added products), meaning we have the opportunity to buy local products and support small-scale farming practices and businesses.

To put this in real terms, here’s Dave Quickel’s story of what community support has meant to him and his farm:

After graduating from UVM I paused to consider next steps. Meanwhile I was broke and needed a job, so I rode my bike over to Bingham Brook Farm on the Hinesburg Road. Jay Vogler was growing vegetables for markets in Burlington and hired me on the spot as a farm hand.

Before that, I’d never really thought about food a whole lot. Me hungry, need eat. But suddenly I was doing something with my hands, my back, my mind and spirit that made complete and absolute sense to me. At the end of every day, I was tired as a dog but satisfied with the practicality and usefulness of what I had done.

I worked at Bingham Brook for a few years, until a friend in Oregon asked if I’d help him start a CSA. Now, in the early 1990s Community-Supported Agriculture (asking people to buy a share of a farm’s production in advance) was a new concept. I had never even heard of it, but it was farming and an opportunity to be in charge. I jumped in and had an incredible experience running a 180-member CSA in Portland.

The Community-Supported Agriculture component took farming to the next level for me. Not only was I being of use, I also got to know all of these people that were so appreciative of the work I was doing. They would come to the farm, walk through the rows, pick flowers, watch the sunset. They got to experience the thing that I loved so much, and it clearly resonated.

In 1996 I pitched the idea to Jay and Marcia Vogler of a CSA at Bingham Brook. They said yes! Thirty members the first year, then 60, then 100. CSAs were new and our timing was right. But when Jay started Pizza on Earth, it was popular right away and farming became less important to them.

I kept the farm going for a while, until joining my wife Emma while she was in grad school out of state. Before long I was approached by Bunky Bernstein and other Charlotte friends who were concerned about lack of fresh local food and urged me to come back to Charlotte and farm. Okay. I wanted to try.

Big problem: I had no land. I needed help—a lot of help. The asking process seemed to take forever, but the response that came back was amazing direct and indirect community support and enough to make Stony Loam Farm possible. For starters, Clark Hinsdale worked with Vermont and Charlotte Land Trusts to sell me a parcel in East Charlotte at agriculture value. Between Vermont Land Trust’s contribution and Charlotte Land Trust’s ability to tap into Charlotte Conservation Fund plus successfully raise additional private donations in town, the land’s development rights could be taken out of the equation. I struggled to come up with the money to close the deal, but eventually I found a bank that liked my business plan and experience for running a CSA.

Twenty years ago, my goal was a 250-member CSA. But today, with many farms offering CSAs, the blossoming of farmers markets, the willingness of local grocery stores to stock local produce and local restaurants to feature them, I’ve learned to use a variety of markets.

Still, the CSA remains the heart of the farm. Even though it is not our sole market, it is vitally important because it connects us so solidly with the community. It is a way for me to provide food to my neighbors and give them a direct connection with where and how that food is grown. And it provides us with key early-season money to buy seeds and all the other things we need to get rolling each year. Win-win.

CSA members appreciate that their weekly share is picked that day right there. And the value is off the hook, typically 30 to 40 percent more than the retail value and that’s not including the value and popularity of u-picks. Being a member of Northeast Organic Farming Association of Vermont’s Farm Share program helps me offer reduced-price CSA shares to folks who need that help. Another win-win.

So now, Virginia, you see the specialness of local farms and how we all benefit from their success. Donations to Charlotte Conservation Fund and Charlotte Land Trust, membership in a CSA, choosing to buy local at farm stands or grocery stores, and thanking restaurants for featuring local products all play a role. Thank you for doing your part to keep local farms alive!

Linda Hamilton is a long-time Charlotte resident and a Grange member.

Dave Quickel produces organic vegetables, herbs and flowers on 10 acres and hoophouses of his Stony Loam Farm in East Charlotte.

Providing fresh food for those in need with Farm Stand Together

First-time gardeners need to know to start with a plan

Onions one of first vegetables to plant in spring