Courtship is up – or soon to be – in the romantic outdoors

Courtship is up – or soon to be – in the romantic outdoors

On Groundhog Day, we tiptoed over the threshold of 10 hours of daylight. Spring love is in the air. Downy and hairy woodpeckers are beginning to drum, a precursor to courtship. Other stirrings are afoot as well.

“Groundhog Day isn’t about shadows or winter or spring. It is about sex,” says Brian Pfeiffer, one of Vermont’s pre-eminent naturalists. “Feb. 2 has been celebrated in various human traditions from Paganism to Christianity.” 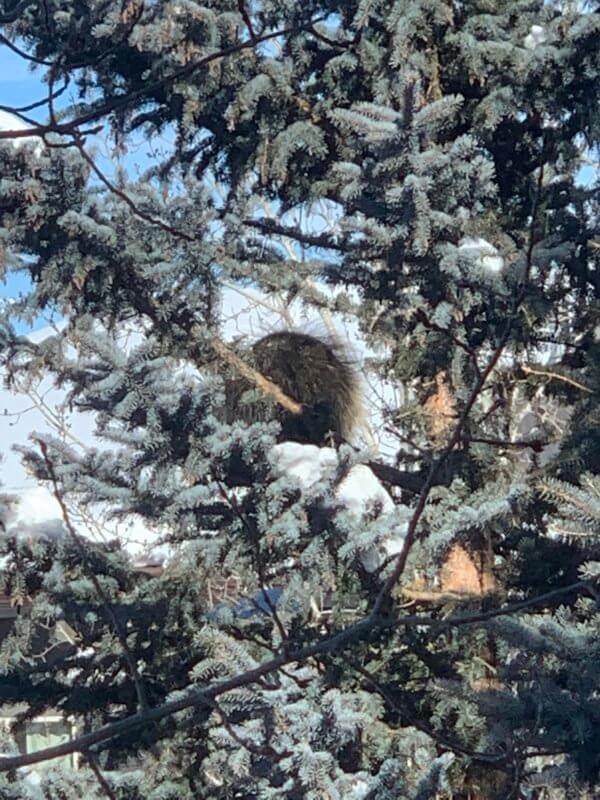 In early February a porcupine perched high in a spruce tree outside our window, budging only a few feet back and forth for five days. (She may still be there — we had to leave.) Photo by Elizabeth Bassett.

Where wildlife is concerned it’s about the light, specifically more of it. In this climate, animals of all stripes must coordinate the arrival of their young with adequate food resources. If a January thaw tricks them into mating, babies would arrive before the food necessary support them — not a successful survival strategy.

“It is not entirely clear how birds measure the length of day,” Pfeiffer says, “but we do know that photo-receptors in bird brains sense increasing light.”

Light triggers the production of hormones, and birds’ sexual organs revive from a state of dormancy. When food is there in May, songbirds will be ready, too.

With more daylight for walking, put on some safe, spiked footwear and head outdoors. You may witness some spring love for yourself.

If you walk near beaver ponds, look for heads poking above the ice, although mating generally takes place beneath. Raccoons sometimes leave trails of their pursuits across the snow — keep an eye out for tracks. After darkness settles, coyotes howl and can carry on for hours. Likewise the raucous courtship of barred owls — “Who-cooks-for-you?” — can haunt your sleep.

Female porcupines conserve energy by sitting in a cave or tree, waiting for a mate to find her. Only a fragrant pile of scat alerts passersby to her presence. In early February a porcupine perched high in a spruce tree outside our window, budging only a few feet back and forth for five days. (She may still be there — we had to leave.) Bobcats, furtive in the best of times, may be traveling long distances to find partners.

Very hardy great horned owls hoot their love songs as early as November and December. The female is now sitting on eggs while her mate keeps vigil from a nearby tree. In her book Naturally Curious, Mary Holland reports that great horned owls can successfully incubate eggs when temperatures dip as low as -27 degrees.

Because birds are warm blooded, they must retain body heat by shivering, puffing their feathers to create additional air pockets of insulation, and exposing as little of themselves to the cold as possible.

Why hatch their young so early? Babies stay with their parents throughout the summer, learning to hunt in preparation for independence. As any parent can imagine, this takes time.

Don’t expect to see cold-blooded snakes, salamanders, frogs and other amphibians and reptiles out and about. They will remain in hibernation for another month or two beneath rocks and leaf litter or in small caves and burrows. After the snow is gone, a few salamanders may emerge to sun themselves on a protected, south-facing hummock or rock. Not a sign of spring most people think of, but a promising one.

Here’s something to keep you busy during the 14 hours of darkness that persist in late February: a free online program about Forest Pest First Detectors. Why, you might ask, should I care about forest pests? Because Vermont forests are under siege; by being informed we may be able to help.

Our butternuts have nearly disappeared in the Champlain Valley, and American beech trees are plagued by a canker, a combination of a fungus and a scale insect that weakens or kills its hosts. The woolly adelgid is coming for our hemlocks, and now, our ash trees are under assault. Five percent of the state’s woods and forests are vulnerable to the emerald ash borer that is now marching (and flying) across the state. More often than not, these invasives are first spotted by informed community members.

The eight-week course, presented by Audubon Vermont, Vermont Center for Ecostudies, Vermont Fish and Wildlife and the Vermont Department of Forests, Parks and Recreation, is free and self-paced, running from Feb. 21 to April 17. It will include optional live webinars and field trips. More information on the website.

Meanwhile, burn through that woodpile and order seeds for the garden. Spring is coming!