Aurora Farms, the next generation comes into his own

Aurora Farms, the next generation comes into his own

In farming particularly, succession matters. Large pieces of land need to be worked to generate income, labor is critical, and the capital investment required to operate a farm is significant—a single piece of machinery can cost half a million dollars. And so, when a family has been farming for hundreds of years, as is the case for the owners of Charlotte-based Aurora Farms and the Nitty Gritty Grain Company of Vermont, it’s easy to imagine the expectations of the next generation.

Not so, says David Kenyon, 35, and the eighth generation to follow in the furrows of his forebear, Barnabas Barnum, who over 200 years ago began tilling land that the family still owns in Monkton. “I really didn’t have any pressure to do it, which was great,” David reflects on a wet October day inside the farm’s machine shop, his words punctuated by an occasional burst from the air compressor. The field work is mostly finished for the season, and the giant combine and trucks are parked in the red barn fronting Lake Road, which also houses Nitty Gritty.

Though David grew up helping on the farm, he left Vermont to pursue higher education. After earning a graduate degree in architecture in Michigan, he returned and worked at Birdseye, a design and build company in Richmond. Eventually, he tired of sitting behind a computer screen and itched for that visceral connection to the land that farming provides. “It’s very rewarding, working outside…and actually producing something that people are eating,” he says. Equally strong was the desire to do it sustainably. “I don’t think I would have come back if weren’t organic. And it’s really nice that my dad’s also pretty passionate about that.”

David’s father, Tom, 66, a former dairy farmer, is an esteemed member of Vermont’s organic farming community. He’s credited with the vision not only to experiment with growing unusual varieties of wheat and corn in Vermont’s cold and wet weather, but to sell those organic grains locally. That idea was sparked decades ago by a conversation with Jane Kirby, a neighbor, who wondered why none of the grain grown here was available to buy. They collaborated on and won a USDA grant to do a feasibility study and then launched Nitty Gritty in 2008. Its impact on local bakers and chefs, as well as on other organic family farms, has been galvanizing.

As David watched his father age, he perceived a once-in-a-generation opportunity to shape the future of the business. “I kind of decided that I’d better come back and take it over. My dad was going to retire and [if I didn’t do that] I’d lose that opportunity.” 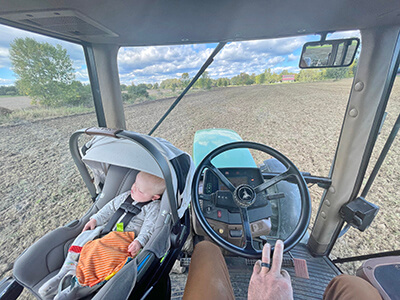 Now, he is gradually assuming control of the 600 acres that they farm in Charlotte and Shelburne. It’s a move that David’s aunt, Catherine, a retired teacher who runs Nitty Gritty, admires. “He’s choosing the not easier path…and I really applaud that. The idea of a family that stays together and has a common goal and that goal has integrity, that it is not all about money, is just pretty amazing.”

As the transition evolves, David, a quietly thoughtful and visionary man in his own right, is exploring ideas for change: reducing the amount of tillage to lessen their carbon footprint; trying new grains, including oats, which his ancestor Barnum grew; improving yields and soil health and fertility; modernizing systems and technology; and designing new signage and even a possible future retail store for Nitty Gritty. He’s also confronting the two biggest issues that all farmers are facing today: the effects of climate change and a labor shortage.

Progress notwithstanding, he will carry on the Kenyon family’s values of hard work and integrity, much of which he credits to his father. “He’s a pretty good teacher. He’ll teach me some things and then let me make my own mistakes, because sometimes that’s the only way you can actually learn and remember.”

One of the most important lessons Tom imparted was the commitment to local food systems. It’s the reason Nitty Gritty was started, and it’s a big motivator for David as well. “We’re competing against 10,000- to 20,000-acre Midwest farms…and we’re never going to be able to survive at that price point.” Like his father, David intends to continue to “bring back a little more local identity to the grain that’s grown, so it’s not just going into billions of bushels that you have no idea where it’s from, or it has no unique characteristics…”

Jim Williams, the owner of Backdoor Bread in Charlotte and the former proprietor of Seven Stars Bakery in Rhode Island, is among the local artisans who benefit from that dedication. “The wheat that the Kenyons are growing is as good as anyone else’s. It performs well and it tastes incredible. Buying local grains is definitely what people are looking to do now, and a lot of it is because of the hard work that small farmers like Tom and Dave Kenyon have done.”

David hopes that his father and aunt will stay involved with the businesses for a long time. Family is important to him, now more than ever as he and his wife, Sarah, welcomed a daughter, Charlie, in May of this year. And though the first-time father won’t exert any pressure on his child to farm, just as his father didn’t on him, Charlie has already been on the tractor with David, snugly strapped into her car seat. It’s tempting, then, to imagine a ninth generation eventually succeeding him. “I would love to see Charlie working on the farm in the summer,” he admits freely. “I did that growing up and it was very formative for me.”