Congratulations:
to Kate von Trapp on her marriage to Chris Renner on Aug. 7, 2021. The ceremony took place at her mother’s home (Jane von Trapp) on Lake Dunmore. Kate is a graduate of Charlotte Central School, St. George’s School, and the University of Miami. Kate and Chris live in Burlington.

to Ace McArleton and his company, New Frameworks, whose retrofit of a house on Greenbush Road in Charlotte is featured in an article in the Sept. 15 Seven Days. The retrofit was designed to give the house “deep energy efficiency” while maintaining the basic design.

to Lydia Clemmons of Charlotte who received the Arthur Williams Award for Service to the Arts. In addition to the Arthur Williams Award for Service to the Arts, Lydia Clemmons received the Con Hogan Award for creative, entrepreneurial community leadership from the Vermont Community Foundation. The Hogan Award  honors a community member who shows deep community involvement, generosity and enthusiasm in their work. Lydia is the steward of the Clemmons family farm off Greenbush Road where she teaches African culture through the farm site. Lydia has 35 years of community development experience, both here and in Africa. The Clemmons farm is one of the 0.4 percent of farms in the U.S. that remain Black-owned, and its history remains an important teaching tool. Lydia’s father, Jackson Clemmons, grew up in southern Wisconsin before attending medical school. Lydia’s grandfather had been moved to Wisconsin from the deep south to integrate an otherwise all-white staffed headquarters of the Fairbanks-Morse Power Corporation in Beloit, Wisconsin.

to Alex Bunten of Charlotte for his recent appointment as Leadership and Talent Manager for the Lake Champlain Chamber of Commerce. A former editor of The Charlotte News, Alex more recently served as Project Manager for the Burlington Business Association. Alex earned a baccalaureate degree from the University of St. Andrews, Scotland, and masters from the universities of Uppsala, Sweden and the University of Deusto, Spain.

Sympathy:
is expressed to family and friends of Harold (Chubby) Moran of Shelburne who died Sept. 1 at the age of 93. He was the first baby to be born in the new DeGoesbriand Hospital in Burlington. Among other work positions in the area, he was a financial administrator with Burlington hospitals. His surviving family includes children Sean, Karen Lafayette, and Tim, as well as daughter-in-law Ceal Moran—all with ties to Charlotte. Those wishing to make financial contributions in Harold’s name are urged to consider Ronald McDonald House Charities, 16 South Winooski Avenue, Burlington, VT 05401.

David Garrett
David Walter Garrett, 78, of Charlotte, died on Aug. 17 from heart failure brought on by a breakthrough COVID infection. Though tragic, it was as he would have wanted it: over in an instant at his home, the historic Cedar Farm on Thompson’s Point in Charlotte. 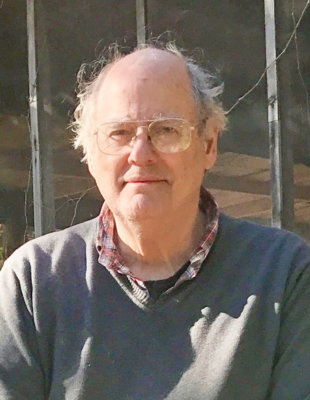 A woodsman, artist, investment manager, entrepreneur and hotelier, things that seemed impossible regularly came to be real—from a cabin in the Adirondacks he built by hand, to a boutique hotel company that set new standards for ultra-luxury accommodation and historic preservation.

David was one of the most experienced developers in the world of small, high-end hotels, beginning with the purchase in the 1980s of a Rockefeller Great Camp on Upper Saranac Lake, New York, known as The Point. The hotel became one of the most lauded luxury properties in the country and led to other hotels, including The Lake Placid Lodge, The Wilcox in Aiken, South Carolina, and The Inn of the Five Graces in Santa Fe, New Mexico. David was also instrumental in Twin Farms in Barnard, Vermont. He had served as North American president of the prestigious Relais & Chateaux hotel association.
He helped inspire a renaissance of all things Adirondack. He enlisted local craftspeople to build pieces for the hotels and he also made pieces himself—many are on display in his most recent hotel project, The Ivy, in Baltimore, Maryland; in his barn/office in Charlotte; and on his website, Corkiture.com, named for his fascination with using corks in his furniture making.

David was born in New York City on Dec. 12, 1942, and grew up in Scarborough, New York with his brother, Daniel. His parents, Daniel N. Garrett and Louise Benson Garrett, were transplanted Southerners, and David nurtured a lifelong fascination with his family genealogy.

As a boy, he was drawn to the woods and fascinated by the television show, “Daniel Boone,” impressed by the warm family life in a log cabin. He attended The Williston Northampton School and the University of North Carolina at Chapel Hill, where he even lived in a log cabin.

After college, he met his wife, Christie Coursen, then a flight attendant for TWA. In 1967, he purchased 165 acres in the Adirondacks and began building his own cabin that became a family retreat. All important life decisions, he’d say, were made at the cabin.

David was a broker at Moseley, Hallgarten, Estabrook & Weeden and later at First Albany, managing offices in Cambridge, Massachusetts, and in Burlington. He also helped the Vermont Teddy Bear Company go from a pushcart to a booming bear-gram business. In 2008, David and Christie started Garrett Hotel Consulting, where they advised on properties around the country.

David is survived by his wife of 53 years, Christie, of Charlotte; daughter Erin Garrett-Metz, her husband, Andrew Metz, and their children, Lydia, Daniel and Miriam of Manchester by the Sea, Massachusetts; daughter, Moriah Garrett, her husband, Rob Arthur, and their children, Samuel, Elouise and Olive of Baltimore, Maryland; and daughter, Caitrin Garrett of Burlington.