Caroline Patten: Sewing for her passions

Caroline Patten: Sewing for her passions

Growing up in New Jersey, Caroline Patten spent as much time as she could on the water. These days, she is spending more time in the mountains, and the combination of those two loves forms the name of her new business—MoLa, which stands for mountains and lakes. Patten’s mother taught her to sew when she was in middle school. “I thought it was a cool arts and crafts hobby,” she said, “and in high school I had a little business making headbands and other knickknacks for friends.” MoLa started the same way in 2020 with Patten making sports attire for herself and her friends, but she’s hoping to grow it into a full-time business.

Patten was introduced to sailing by some high school friends. “With sports,” she admits, “if I like it a little bit, I go all in.” She raced sailboats at Hobart and William Smith Colleges and competed in the Pan Am games in 2015, racing in the Lightning class. After college, she took a job sewing sails in Vermont, followed by a stint coaching the UVM sailing team from 2015 to 2021. “I have a lot of respect for the kids on the team,” she said, “but I was working seven days a week and traveling to Boston every weekend.”

Patten started MoLa by making hoodies on a sewing machine she already owned, but she was later gifted a new one for her birthday. She subsequently purchased a serger, which allows her to do more professional work. Patten makes her clothing using Polartec fabric, which runs the gamut from thicker material for fleeces to lighter material for technical shirts and sun shirts. She described how a large company like Patagonia will order yards of fabric, but what they can’t use becomes “dead stock” that is then sold in smaller quantities and at lower prices, making it affordable for small businesses like hers. 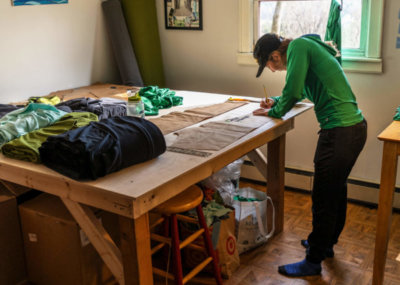 When she’s not sewing, Patten spends as much time outdoors as possible. “When I was in my senior year of college, one of my best friends invited me to live with her in Lake Placid and work at Whiteface,” Patten said. “I fell in love with snowboarding and living in the mountains. That’s a big part of the reason I ended up in Vermont.” Although sailing has been an important part of her life and she continues to take part in Wednesday night races, Patten has recently switched her main water interest to kiteboarding. She has also begun mountain biking after finding a group of friends who love that sport. “I like having something to do in every weather condition,” she said.

Patten hasn’t done any advertising, but her sales have already gone beyond Vermont with customers in California, Oregon, Washington and Colorado. “The idea behind the company is making clothes in Vermont for the activities we do in Vermont,” Patten said. The names of some of her clothes reflect that. Hoodies named Profanity and Nosedive are nods to ski trails and Crag refers to Vermont’s Climbing Resource Access Group. “It’s very much a Vermont focus,” Patten said, “but I’m happy when people use them in other areas.”

Patten is hoping MoLa will grow over time. “I absolutely love every part of this,” she said. “I love designing new items, selling them, seeing friends wearing them, taking photos, marketing— every aspect of the job. I’m really excited about the work and that’s something I haven’t experienced before.” Patten doesn’t want to contribute to the growing landfills in our area. “One of my goals is to create a product where if you tear it, you can bring it back and I’ll fix it or replace it,” she said.

Patten wants the company to grow into a full-time job, but she also wants to keep it local. “I don’t ever want to outsource to a remote location,” she said. “I’d rather train people who are of the same mindset and want to sew for a few hours before heading off to the mountain.” Ideally, Patten would like to have a storefront somewhere between the interstate and Stowe where people could meet her, see her work, and try out her products. “There needs to be more locally produced clothing,” she said. “Skida does a great job with head coverings and Darn Tough does a great job with socks, but people are still buying clothing made in Asia for their base layers. Vermonters love local stuff. This could be a really positive thing for our area.”