It’s hard to summarize Zach Pollakoff’s life because he is involved in so many creative endeavors. Borrowing from an artist he works with named Ross Simonini, Pollakoff refers to himself as a generalist curator. “Generalism encourages creative people not to box themselves into one discipline,” he explained. That said, music is the centerpiece of Pollakoff’s career. He DJ’d and then served as general manager for Indiana University’s radio station before moving to Brooklyn, where he was a music producer for an ad agency and founded Twosyllable records. Pollakoff’s in-laws live in Hyde Park, and at the start of the pandemic he and his wife and young kids came to visit. “We thought we’d stay for a week or two but ended up staying seven months as we looked for a house of our own,” he said.

Pollakoff found his dream house in Charlotte, and the family moved in last October. The rental had belonged to painter Maize Bausch and architect and boat builder Carl Bausch. “Without sounding too granola,” Pollakoff said, “the house has a real energy with a unique shape, big open space, incredible light and a jaw-dropping view of the Adirondacks.” He loves that Maize’s studio is still on the premises, as are remnants of Carl’s boat projects. The family will leave their prized location at the end of the year because they have purchased another home in town.

Pollakoff works for Heavy Duty Projects, which produces original music and music supervising for advertising, television, film and video games. They are based in Los Angeles, so Pollakoff has always worked somewhat remotely, but with pandemic restrictions being lifted, he recognizes that he will probably be travelling for work again soon. 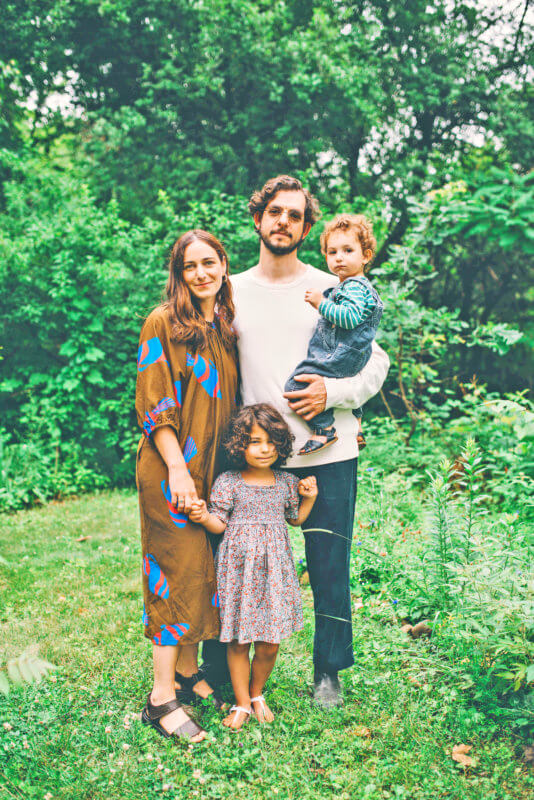 Under the name Narrow Shoulders, Pollakoff has produced an album called Now Be Here on which he plays the clarinet and a bit of guitar. “The clarinet was my first instrument,” he said. “I recorded little samples that are layered and layered and manipulated. My playing is very rudimentary. Digital music plays to my skill set, which is less about being virtuosic and more about arranging and organizing other people’s bits of recordings or those I made myself.” In addition to his own music, the album features the sounds of frogs, wind and water that Pollakoff recorded on his phone. “Arranging and organizing is how I make my soundscape,” he said.

Pollakoff started Twosyllable Records in 2008, thanks to a loan from a sympathetic banker who had been a member of the band Smog. They have released over 30 records. “The style of music differs across the board,” Pollakoff said. “The most popular band was Candy Claws, which has since reformed as Sound of Ceres. They have a devout following and are considered part of the shoegaze indie genre.”

When Pollakoff first moved into the Bauschs’ old home, he knew he wanted to have an art show. “It seemed like a natural thing because this house looks and feels like a gallery,” he said. Inspired by the thought of painters with some of their output splashed across white painter’s pants, he got Dickies to donate several pairs to serve as canvases. “Their warehouse was in the part of Texas where the power went out,” Pollakoff recalled, “so there were delays. Then, shipping them across the globe became challenging, so I changed it to a domestic project and we had 18 artists in all.” Roughly 100 people came to the show at the improvised gallery where there was a DJ, snacks and Zero Gravity beer. “It was a circuitous and successful way to meet some of my cool neighbors,” Pollakoff said. “A lot of people are doing great creative and interesting things that I didn’t know about.” He is hoping to do another show, possibly with large-scale installation pieces, before he moves into his new home.

Pollakoff is the co-founder of Likeminds, which staged annual events from 2016 to 2019 in upstate New York. Covid put that on hold, but he’s hoping to have an upcoming event in Vermont. “They are part conference, part festival,” he said. “Anyone can buy a ticket, but we like to bring together a diverse array of curious and interested people from a variety of disciplines.” The events have speakers, workshops, food and music.

For Pollakoff, Likeminds events are a way to inspire creativity. “I always had a spark,” he said, “but to see how others manage their ideas is great. The more people you meet, the more you think about what you can do. I love getting that kind of inspiration.”