As I write this, the leaves of our trees have unfurled, our forests blooming in an unthinkable diversity and abundance. Even in the midst of a dry early summer, everything seems full to the brim with water and with life.

Like all plants, trees need water. Besides helping trees transport nutrients, minerals and sugars, water is a critical ingredient in the process of photosynthesis, combining with carbon dioxide and other nutrients to create sugars. Water is also released as a bi-product of this process; as they photosynthesize, trees inhale atmospheric gases (especially carbon dioxide) through pores in their leaves called stomata. When stomata open to admit carbon dioxide, water vapor is lost. This process is not super-efficient: on a sunny summer day, a large tree may suck up 150-300 gallons of water, 90% of which will be lost. In drought, trees cannot sustain this cost; they keep their stomata closed to prevent water loss, making them unable to photosynthesize. The water vapor produced by trees has a number of benefits, including cooling our climate, helping form clouds and creating precipitation – returning water to the forest to be drawn up into trees again. 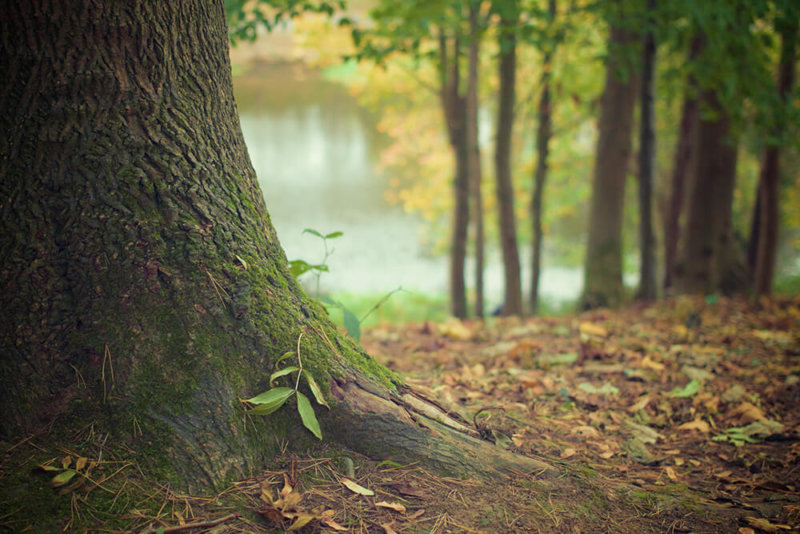 Water is precious in forests, and they are adept at holding on to it. Rainwater is often intercepted by a tree’s leaves, channeled down its twigs, branches and trunk. Like a giant funnel, the tree collects water, feeding its central root system in a phenomenon known as stemflow. Dead wood intercepts water flowing on the surface of soils, spreading it out and helping it to infiltrate deeper into the soil profile. Once in the soil, water is absorbed by organic carbon (dead tree and plant material) which, in addition to helping mitigate climate change and providing nutrients for trees and plants, acts as a sponge. The massive amount of water stored in the forest nourishes trees, in addition to the rich diversity of forest plants, animals and invertebrates and the complex below-ground community that we call the rhizosphere.

While forests need water, too much water or water moving too quickly through forests can be a problem, leading to soil loss (erosion) and to nutrients being leached from forest soils. While some erosion, like the meandering of a stream, is natural, too much erosion leads to the pollution of waterways through siltation (the deposition of soil particles) and eutrophication (the deposition of nutrients like phosphorous and nitrogen), causing problems for both water quality and forest health. The ability of forests to slow down, spread out, and absorb water helps mitigate these effects, but built infrastructure like roads tends to exacerbate them.

The way that forests manage water make them excellent filtration systems. New York City in particular has spent billions of dollars since the late 1990’s to invest in land acquisition and conservation rather than traditional water filtration facilities. As a result, much of New York City’s water is “unfiltered,” making it the largest such system in the United States (other large cities with mostly “unfiltered” water supplies in the US are Boston, San Francisco, Seattle and Portland, Oregon).

As our climate changes, both the amount of precipitation we get and the way we get it are changing. Some parts of the globe are becoming dryer, others becoming wetter. At the same time, the ability of forests to support a healthy global water cycle is threatened by forest clearing and degradation, non-native invasive plants, animals and pathogens, and a variety of other factors. Even when precipitation remains constant, it is increasingly concentrated into shorter, more severe storms, which are more difficult for our forests to attenuate and for our infrastructure to handle. While Vermont is forest-rich, we are still losing over 1,000 acres of forestland a year, our remaining forests increasingly fragmented by roads and development and infiltrated by invasive species.

As we swim, float, boat and otherwise enjoy Vermont’s beautiful water this summer, remember that it comes courtesy of our cheapest and most underappreciated piece of natural infrastructure; our forests, which capture and clean water at the same time that they sequester and store carbon, provide wildlife habitat, support local renewable resource economies and make our state beautiful. Addressing forest health threats, encouraging forest diversity and resilience, and (most importantly) keeping forests whole and unfragmented is critical to keeping our water clean and clear.

Ethan Tapper is the Chittenden County Forester. He can be reached via email or by phone at (802) 585-9099. Sign up for his email list or see what he’s been up to at his website.