The St. Andrews Pipe Band marched in, kicking off the commencement. Principal Adam Bunting began his speech with a collective deep breath to “feel that pandemic stress fade away.” The graduates were asked to stand and point at someone who helped get them to that moment, but Principal Bunting emphasized, “This graduation is about you” and it “is so well earned”. 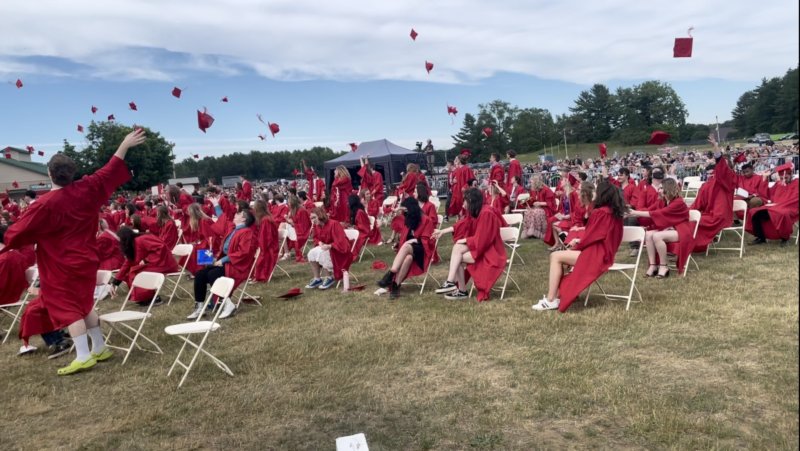 Graduates throw up their caps. Photo by Nick Bishop.

The commencement was filled with outstanding musical performances, including a rousing rendition of the national anthem performed by Alissa Miner. Next, Maya Phelen and Oscar Williams performed “True Colors”.

Courtney McDermott shared a story of the first time she felt truly welcome at CVU. She said she intended it as “a love letter to the whole student body.”

Leena Ashooh recalled an activity the class performed during Freshman year where the objective was to get 30 people to balance on a platform in water. Leena said the exercise taught her that “small actions that support your community have effects that are broad and wonderful.” She also alluded to a Palestinian saying of, “Do good and throw it in the sea, because I can’t wait for the ripples.” 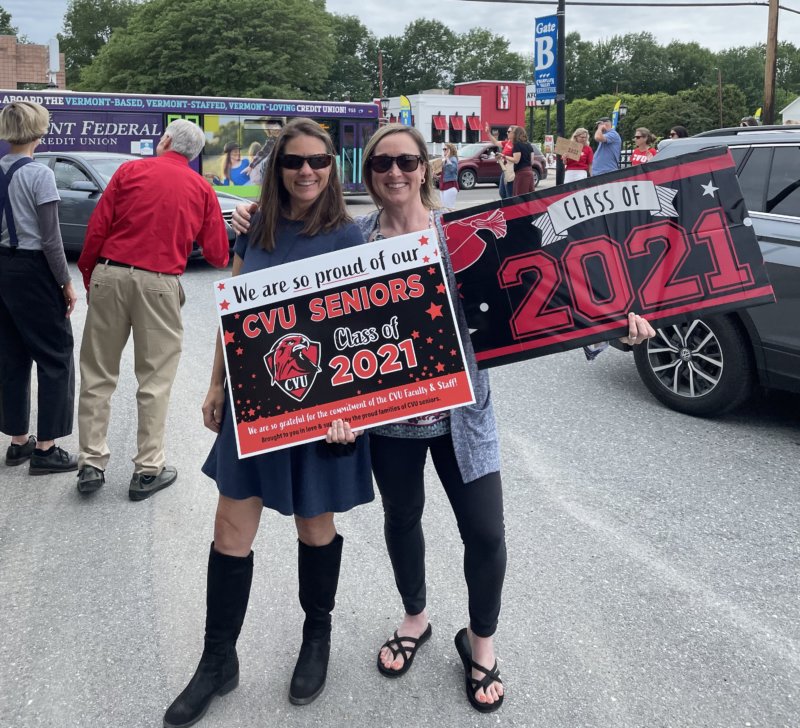 Traffic lined Pearl St. as friends and family came to support the class of 2021. Faculty and staff cheered with signs as cars arrived. Teachers Heidi Dostal (left) and Karen Rodgers (right) said they were “super proud,” and described the students as “superheroes.” Dostal said, “they can make it through anything after they made it through this year.” Photo by Nick Bishop.

Jerry Greenfield, whose son graduated from CVU in 2007, took to the stage to address the class of 2021. He began with an emphatic, “Congratulations!” and went on to tell the origin story of his of his world-famous ice cream business. He shared his business partner Ben Cohen’s personal philosophy, stating Cohen “would much rather fail at trying something new than do something that’s already been done before.” Greenfield ended his address by quoting an African proverb, “To stumble is not to fall, but to move forward more quickly.”

Elyse Martin-Smith gave a speech highlighting what CVSD accomplished during Elaine Pinckney’s time as superintendent. She gave thanks to Elaine and spoke of her efforts to create a truly caring world and a connected community. A gift was then presented to Elaine for her work.

Students began lining up next to the stage as Superintendent Pinckney read their names certifying their graduation from CVU. Students, parents, faculty, and staff applauded and cheered as the students made their way across the stage.

Oscar Williams performed a solo to the song “Time of Your Life.” There were smiles across the sea of graduates. St. Andrews Pipe Band getting ready to walk in. Photo by Nick Bishop.

The commencement ended with a powerful speech by Catherine Young. She spoke of the adversity graduates will face going forward and said she has “learned how precious time with the people you love is.” She advised the graduates to “accept help from those who offer it,” and “never stray from who you are, you need yourself the most.” Her final advice was to “defy your own expectations and make yourself proud.”

The St. Andrews Pipe Band led the graduates out on a beautiful June day. As parents and friends packed up to congratulate the graduates, “September” by Earth Wind and Fire played on the speakers, setting the mood for a time of celebration.

Nick Bishop, is a student at the University of Vermont and a reporter for the Community News Service, a student-powered partnership with local community newspapers.