In 2000, Larry Hamilton, Charlotte’s tree warden, began the project of planting memorial and specially dedicated trees in Charlotte’s parks and rights of way. We are publishing this list so people can be aware of these trees and more easily find and enjoy them. Anyone who might be interested in planting a memorial tree and would like information about how to do so should contact Tree Warden Mark Dillenbeck or Deputy Tree Warden Sue Smith. 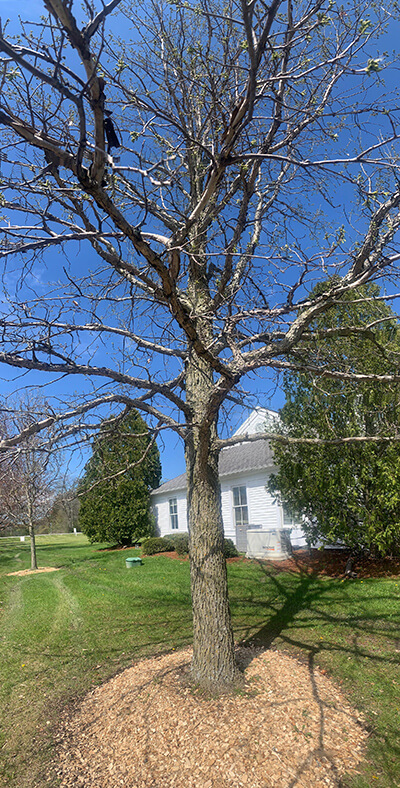 The Millennium tree, a swamp white oak at Town Hall, is now 21 years old. It will reach 60 to 80 feet in height and can live up to 300 years. Photo by Vince Crockenberg

To memorialize the beginning of a new Millennium, a swamp white oak planted with ceremony in June 2000, with funds provided by the state, at the SW corner of Town Hall.

To honor her husband, Paul, a memorial sugar maple from Katherine Teetor, planted in 2006 at Barber Cemetery, in the center near a large stump.

To honor Richard Weed on his birthday, a Princeton elm, later replaced with a burr oak, from his wife, Joan, planted in 2007 in front of Old Lantern (first tree north of the driveway).

To honor the late Hugh “Cowboy” Lewis, Charlotte’s town constable for many years, a memorial sycamore planted in 2008 at the Town Beach beside a bench overlooking Lake Champlain. The tree was formally dedicated in 2010.

To honor Dana Farley on her birthday, a sycamore tree, from her many friends who donated generously, planted in 2008 at the Town Beach ballpark parking island. Dedicated in 2010

To commemorate Green Up Day, a sycamore, funded by CCS class bake sale and guided by Susannah Kahn, planted in 2008 at the Town Beach Park, to provide future shade for the parking lot attendant.

To honor Marie-Dennet Murphy McBill, a memorial black locust, from Christina Ellis, planted in 2009 at the Charlotte Museum to replace a large locust taken down in 2008.

To honor John Outwater, a memorial sugar maple planted in 2009 at the Thompson’s Point ballfield to provide shade, courtesy of Katherine Teetor.

To commemorate Arbor Day, an apple tree obtained by Robin Reid and planted in 2009 at The Old Lantern, south of the building, followed by a party and a tree display.

To honor Thompson’s Point summer resident Robert Tucker on the occasion of his 90th birthday, a Freeman’s red maple, given by his longtime friend Katherine Teetor and planted in 2010 on the corner of Thompson’s Point and Flat Rock roads.

To honor Bodhi Kurindiyara Hill, a memorial red maple, given by Carol Hanley and Bunky Bernstein and planted in 2010 on Prindle Road, the farthest south of the planted row of red maples. 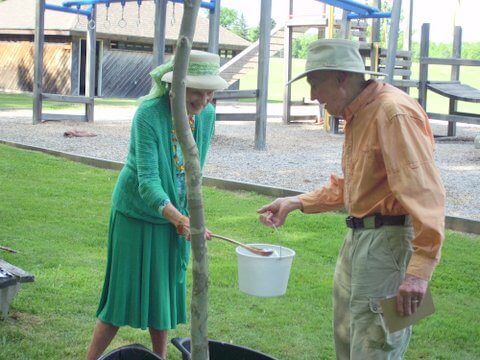 Alice Outwater and Larry Hamilton, in 2016, offered a water blessing to the newly planted trees at the Charlotte Beach playground.
Photo by Linda Hamilton

In honor of Virginia Rutter, a row of 10 Freeman’s red maples, given by her daughter, Robin Coleburn and planted in 2010 along Thompson’s Point Road west of Flat Rock Road. Robin is the granddaughter of Bill and Dorothy Rutter, who provided the initial funding for the Rutter Family Charlotte Beautification Fund, which made most of our roadside restoration tree project possible.

In memory of John Outwater, two white pines, donated by his wife, Alice, and planted in 2010 on Thompson’s Point Road just east of the caretaker’s house.

To honor Frank Thornton for his long service to the Town of Charlotte, a sugar maple planted in 2011 near the southeast corner of Barber Hill Cemetery, donated by Carrie Fenn (nee MacKillop) and Peter Demick.

In memory of Will Foster, with funds raised by his wife, Frances, and friends, three swamp white oaks planted in 2011 at the corner of Lake and Holmes roads.

To honor Sarah Montgomery, a memorial swamp white oak, a species much beloved by her, planted in 2012 on Greenbush Road opposite Ten Stones, where she lived. Her husband, Ted, and their neighbors contributed to the memorial tree.

To honor Arline Lewis, who, along with her husband, Cowboy, was often the “gatekeeper” at the Charlotte Park and Wildlife Refuge, a memorial swamp white oak, planted in 2015 by her family on the center island at the entrance to the park. 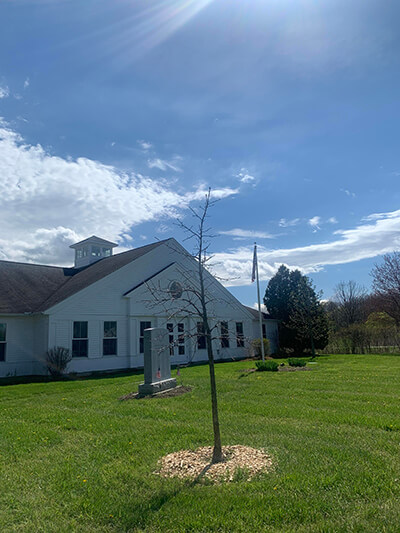 A young burr oak on the Town Green memorializes Larry Hamilton’s contributions to the town. Photo by Vince Crockenberg

To honor Larry Hamilton on the occasion of his 90th birthday and to recognize his 20 years of service as Charlotte’s tree warden, a “Tree Warden” swamp white oak, planted in 2015 to provide shade to those sitting on an overview bench in the upper Charlotte Park and Wildlife Refuge.

A gift to the town from Alice Outwater of eight red maples and one sycamore, planted in 2016 at the Charlotte Beach playground.

In memory of Larry Hamilton and appreciation for his long community service, a burr oak, donated by Horsford Gardens and Nursery and planted in 2017 northeast of the World War II Memorial on the Town Green.