Have you heard about all the non-native invasive species in Lake Champlain? These include 50 species of plants, animals and pathogens that were introduced to the Lake Champlain Basin. Some were planted because they had pretty flowers. Others got here through ballast or bilge water from boats. These non-native species (species that were not present at the time of European settlement) can, in some cases, spread and take over (becoming invasive) because they have no natural predators. This can cause a major problem for ecologically rich natural areas, not only for our native plants and animals that get choked out by these intruders, but also for people who like to recreate on the water. Plants like water chestnut, European frogbit and Eurasian watermilfoil can grow so thickly that they are difficult or impossible to boat, swim, or fish in. Some of the aquatic invasive species you’ve likely heard about (like zebra mussels) can be difficult to control. Others, like European frogbit, are more easily removed in order to limit their spread. 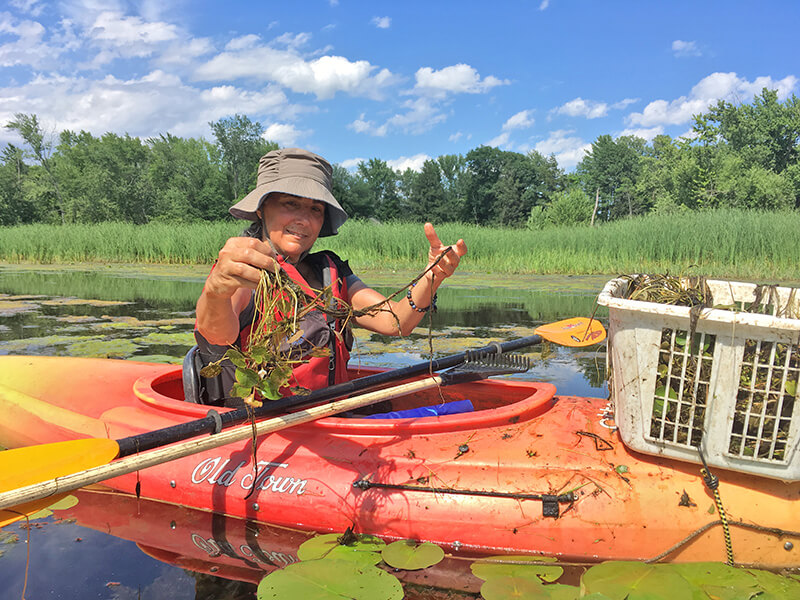 Lewis Creek Association (LCA) has been working closely with the Vermont Department of Environmental Conservation and the Lake Champlain Basin Program since 2009 to monitor and remove European frogbit, water chestnut, yellow iris and flowering rush in Town Farm Bay in Charlotte and in the LaPlatte Natural Area in Shelburne. These two areas are very diverse ecologically, and many people recreate there, making control of non-native invasive species critical.

When frogbit was first discovered in Town Farm Bay, there was over 50 percent cover throughout the wetlands. The LaPlatte Natural Area had lower frogbit levels to begin with due to earlier detection. Lewis Creek Association (funded by the towns of Charlotte and Shelburne) organized groups of volunteers, such as the Charlotte Land Trust, Lake Champlain boat launch stewards and other interested community groups, to rake frogbit off the surface of the water in these areas. Through this work, the percent cover has been reduced from 50% to 5% or less annually and held there.

This spring, LCA will be leading volunteers again to remove frogbit. Matt Gorton, a conservation biologist from Starksboro and an expert in aquatic invasive species, will lead groups (likely in June and July, to be determined soon) to remove frogbit in Charlotte and Shelburne. These expeditions are great fun—all the equipment is provided, so all you have to do is show up and be able to paddle in a canoe or kayak, rake plants off the water surface, and put them into a bucket or laundry basket on your boat. While paddling, your leaders will help identify as many animals and plants as possible—you’re almost sure to learn something new out there If you’re interested in joining LCA for an enjoyable paddle while making a difference in the health of your local wetland, contact Kate Kelly (LCA Program Manager) at [email protected] Even better, get a group of friends together, and sign up together to make a difference.