The women’s basketball season ends on a COVID note

The women’s basketball season ends on a COVID note No more flowers for Redhawks this season. Photo by Al Frey

The Redhawk women’s basketball team ended its regular season undefeated, beating Spaulding 66–29 two weeks ago. That victory gave them a 9-0 win/loss record for the season and made them the #1 seed in the top division of the State Tournament. However, a positive COVID case on the team forced the Hawks to withdraw from the tournament, cutting short their historic win streak.

Men’s basketball attempts to fill in a state tournament championship
Finishing the regular season with a 6 win–3 loss record, the Hawk men will attempt to fill in for their female counterparts whose season ended on COVID. The men began with a 51–46 playdown win over Burr and Burton. Hosting the Bulldogs in Hinesburg, CVU out scored them 35–20 in the last 16 minutes of the game after trailing by two going into the fourth quarter. Devin Rogers’ 15 points led the team’s scoring followed by Ethan Murphy with 11. All in all, seven teammates scored in a balanced attack.

That win moved the Hawks on to a state quarterfinal game against Burlington. With CVU ranked fifth and BHS ranked 13, some may have thought CVU would have had an easier time than it did. Junior guard Oliver Pudvar came off the bench to hit 17 points, which included five three-pointers. Alex Provost, Logan Vaughn and Devin Rodgers hit for nine while Zach Doane and Ethan Czarnt added eight apiece. CVU’s record now stands at 8–3 heading into the semi-finals—on to Rice. 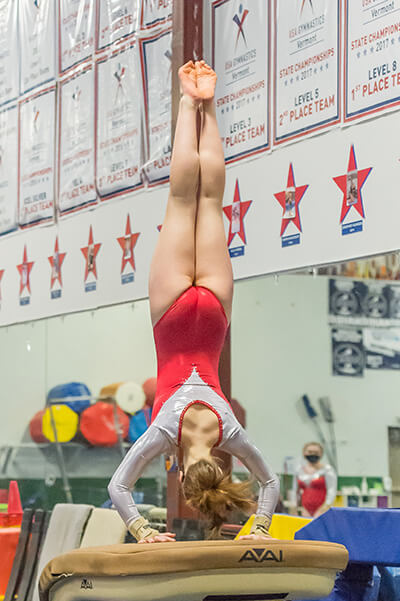 All the world looks upside down from a tumbler’s position. Photo by Al Frey

awk individual who earned third in floor exercises and seventh in the vault and the bars. Earlier in the month, CVU topped Burlington and Milton with Ruby again placing highest among Redhawk individuals, earning Second All Around. Her teammate Rory Anderson followed her in third.

CVU men’s and women’s both slalom champs
The Alpine Slalom championships began at Smugglers Notch and moved to Cochrans. Both Redhawk men and women won team titles. Although Olivia Zubarski from CVU led the individuals after her first run, she did not finish her second, and St. Johnsbury’s Maggie Anderson came in first.

Hockey also faces COVID drop outs
On the men’s ledger, Rice Memorial’s hockey team forfeited its quarterfinal game against CVU. The Green Knights were ranked third, the Redhawks ended their regular season at 4–4 but moved on to the state semi finals.

The combined women’s team of CVU/MMU played South Burlington in the Division II tournament. The Cougar/Hawks lost in overtime 3–2.