John Howe brought his dog to vote at Town Hall on Tuesday. Photo by Ethan Putnam.

On a frigid Tuesday morning Kendra Bowen came to the town hall to vote in person. A mom from East Charlotte, she believes participation is important for a functioning democracy. Without town meeting, Bowen said she felt more disconnected from the community and that she had to do more work to learn about the issues.

Wearing a blue mask that matched his dog’s sweater, John Howe was in a talkative mood. He didn’t get a ballot sent to him and felt obligated to vote. When asked how he felt about not having the town meeting this year he said he “liked to be physically be together for town meeting” and that he felt “less informed” and was “sick of the Zoom meetings”

Howe also said that he wished the town would change the system “where you go to town meeting and then vote at a different time.”

On the controversial 6th and 7th amendments, Howe voted yes, saying, “The Planning Commission has worked so long and so hard on these issues and was trying to prevent the carpeting of the landscape with houses every five acres,” and that “it moves us in the right direction environmentally.” He praised Marty Illick, a member of the planning commission, for working so hard on the amendments.

Susan Smith came to vote today because she thought she might see someone. She really missed Town Meeting Day, saying, “I felt sorta detached — I like hearing what people have to say,” and that she hopes for a school meeting next year.

Smith said that there were difficult issues on the ballot this year with who to vote for, and the proposed East Charlotte changes.

She didn’t want her photo taken for the same reason many others have these days: COVID Hair. Joe Ng stands in front of the Charlotte Town Hall where he just cast his ballot. Photo by Ethan Putnam.

Joe Ng came to vote today to approve the new school budget. “The school needs more resources when it opens up, to help catch up the students who have been left behind.”

Ng said he thought the town meeting was important but had a problem with the old voice vote system. “It’s not a democracy, since people should have an opportunity to vote, and not everyone has time to take off for Town Meeting Day.”

In the future Ng wants an in-person debate, but to keep the Australian ballot, saying “it would give everyone an equal chance.” He also felt just as informed this year and said, “It’s my responsibility as a citizen to seek out that information.”

Brett Towle pulled up in his pickup truck and waved hello. Brett Towle is new to town and plans to stick around. Photo by Ethan Putnam.

A UVM grad, Towle works at Horsford Gardens and Nursery and feels strongly about Articles 6 and 7. “The proposed new commercial and residential developments would be adjacent to our property — I don’t believe rushing it through now is beneficial to the community.” Towle also cited changing values and conflicts of interest as other reasons as to why he was opposed.

As a new resident of Charlotte, this was Towles’s first year voting here. He said he didn’t miss Town Meeting Day and said, “I had all the resources I needed,” to be informed.

He intends to stick around and hopes to become more involved in the community, having recently applied to a seat on the Conservation Commission. 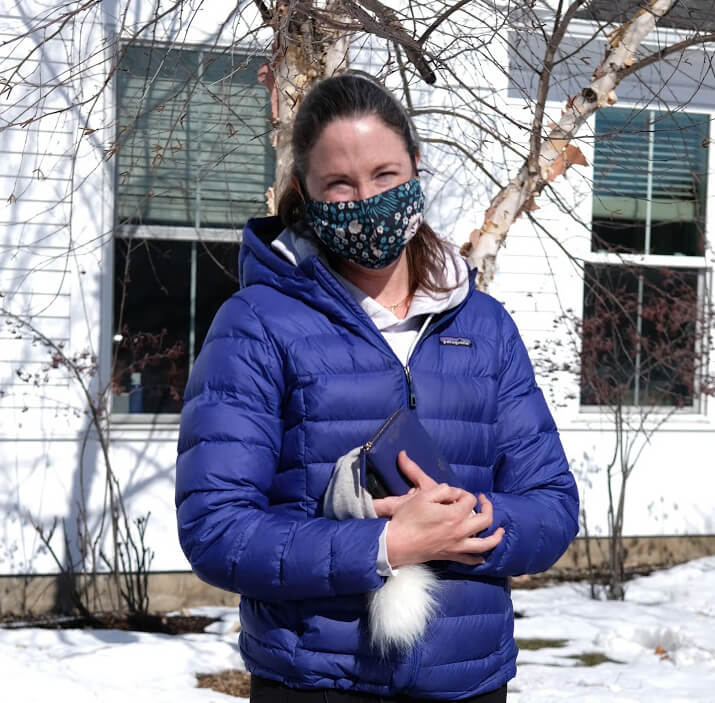 Tina Helzer came from the tennis court to Town Hall to cast her vote. Photo by Ethan Putnam.

Tina Helzer came to vote today after a round of tennis, braving the cold in ankle-length leggings.

She voted for Lewis Mudge and said she “missed having Town Meeting Day because it got the community more involved.”

Helzer also felt less informed this year because of the lack of an in-person meeting but thought that on the East Charlotte Village Commercial District changes, everyone was well enough informed.

John Congdon had a break at his worksite, and so he came to cast his vote. 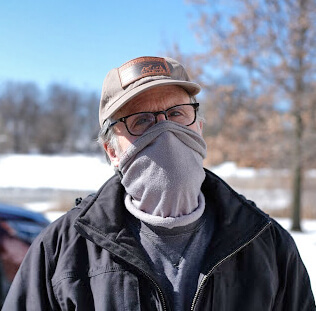 He voted for Articles 6 and 7 because he listened to the panel discussion between the Selectboard and Planning Commission. Congdon said the comment Selectboard member James Faulkner made about European development stuck with him: “The fact that they know how to cluster in a village and then leave more land open surrounding.”

Congdon hopes that there is a process so that “the development can be done thoughtfully and aesthetically and result in a nucleus of economic growth.” 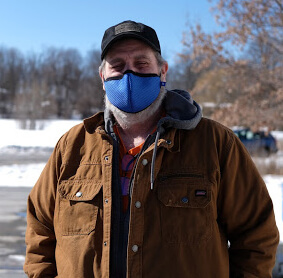 Sporting a tan Dickies coat, Selectboard member Frank Tenney came to vote for himself shortly after noon. (He won his seat.)

When he was asked about whether he missed Town Meeting Day, Tenney said, “It’s always been fun to go.” He supported moving town meeting day to Saturday, a proposal that’s on today’s ballot. “I think it’s hard for people to get here on Tuesday, especially if school is on.”

Tenney said there wasn’t anything he felt very strongly about voting for or against this year, and that “there were a lot of things I didn’t vote for at all.”

After the interview he climbed into the cab of his bright red pickup and drove off.