It’s a no for Articles 6 and 7; yes to Tenney and Mudge, budgets pass

It’s a no for Articles 6 and 7; yes to Tenney and Mudge, budgets pass 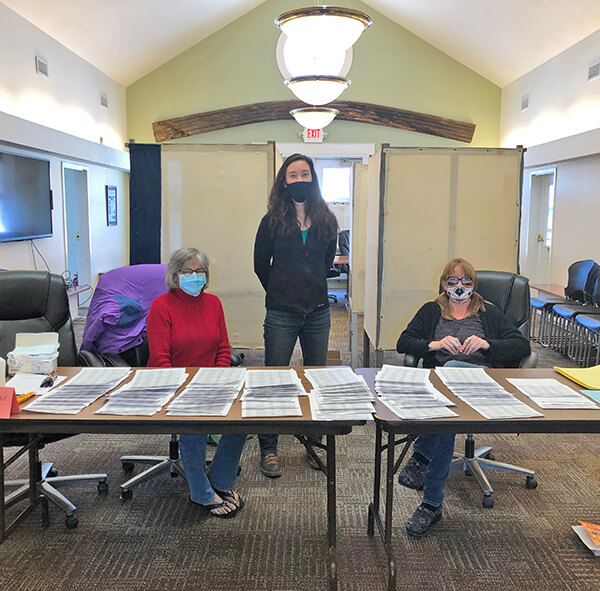 The results were in, but not until midnight—there was a lot to count, and a lot of write-ins. Town Clerk Mary Mead said Tuesday that the Australian ballot resulted in a record number of Town Meeting Day votes.

Article 2, exempting the Charlotte Grange from paying property taxes for the next five years, passed 1047 to 172.

Article 5, changing Town Meeting Day to the Saturday preceding the first Tuesday in March, passed 962 to 256.

Article 6, amending the Town Plan to increase the boundaries of the East Charlotte Village Commercial District, was defeated 859 to 389.

Article 7, amending the LURs in the East Charlotte Village Commercial District, was defeated 885 to 365.

Articles 8 and 9, amending the LURs to make changes to accessory on-farm business regulations and change nuts and bolts language and updates, both passed, 741 to 363 and 841 to 255, respectively.

Article 10, allowing the road commissioner to use his sole discretion regarding percentages when applying road salt and sand, including the option for 100 percent salt, passed 1067 to 114.

Jim Laberge received enough write-in votes for each of the three cemetery commissioner positions available, so he will be able to choose which one he wants and the other two will remain vacant.

Frank Tenney was re-elected with 474 votes and will serve a three-year term on the Selectboard. His opponent Justin Bora received 299 votes and a write-in campaign for two-year term candidate Mike Dunbar yielded 315 votes.