Hold your nose right to catch a big one

Hold your nose right to catch a big one

To a fisherman, the mysteries of what lies beneath the surface, living in a world where we can survive only for a limited duration, speaks of a world vastly different from our own reliance on terra-firma. Although the underwater world has been here millions of years, and even with sages like Jacques Cousteau, we have but an inkling of understanding of the realm of the deep. If you seek wisdom about our connection to the life of marine beings, listen to a fisherman as he speaks of his wonderment and awe of fish, and what attracts him to seek connection to these beings. After getting past the story of “the one that got away” you will begin to see the intensity of their devotion for these creatures. 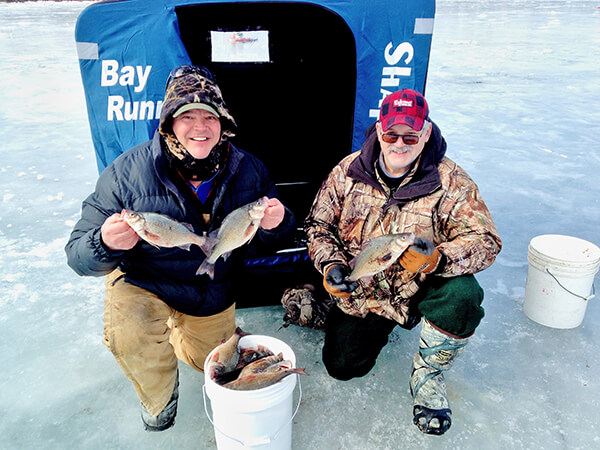 As I sit on my pickle bucket on a stunningly sunny Sunday, in the middle of St. Albans Bay, I am staring down through the 6” icy cylinder into the dark green water. I am lost in a moment of meditation. Thoughts of work, bills, money, and society’s plight are draining down into the melting hole. I hold my ice rod by the end of the handle with a carbon blank running through the center, sensing the delicate vibrations of the fish below the surface. I gently jig my rod up and down in miniscule increments to give action to the lure, baited with a chunk of nightcrawler. My eyes are fixated on the tip of the rod, waiting for the slightest motion, up or downward. There are about 60 others around me doing the same thing, but they are laughing and joking and generally carrying on about the last big white perch that they pulled through the hole.

I have a superstition that if I hold my nose right, that is, if I am looking down the left side of my nose with my left eye, I tend to get more bites than if I look down the right side of my nose with my dominant eye. My grandfather taught me how to fish in a small pond outside Akron, Ohio. We would fish for bluegills and he once told me, when I asked, “How come I’m standing just four feet away from you and you are catching all the fish and I am not?” His answer to me was, “You’re not holding your nose right.”

As a ten-year-old who took things quite literally, I shut my dominant eye and started looking down at the fishing pole. As I was reminiscing about fishing with my grandfather and the lesson I had learned, something magical happened. Immediately, the tip of my ice rod began to twitch. At first it was just a simple upward motion. A release of tension from the 3/16-ounce lure dangling in the dark world beneath the surface. Then, a quick downward tug.

Still not enough to set a hook. The fish was testing my patience to see if I would react to his mouthing the bait. Not really swallowing it. Just holding it in his mouth like a pacifier that could be quickly spit out. Knowing the game, I waited. The line hanging down from the tip of the rod began to sway back and forth. He was swimming with it, holding it gingerly in his lips, prepared to expel it at the slightest sense of tension from above. I waited. The line continued to move from side to side in the ice hole. Then suddenly, out of the blue, a violent tug and the rod bowed down to the surface of the ice, throbbing with powerful vibrations echoing down the carbon shaft, I lifted the rod tip quickly, setting the hook in his jaw. The reel began to sing its zippy song, as the line peeled off the spool. I would reel him in, almost to the hole, and he would take off on a dead run under the ice. The third time he did this, I tightened the drag to create more resistance against his tyrannical battle.

After five minutes, I played the fish until I had his nose and eyes in the hole. He was a big white perch, sides glistening with silver and a wild look in his eyes. I bent forward to pick him up with my hands. Usually, I grab them by the bottom lip, but this fish had no intention of being handled like the others. He was a pack leader and looked to weigh about two pounds with a girth of six inches around his belly. As I reached for him, he contorted himself into a barrel roll, flashing his sharp dorsal spines into the palm of my hand. As the sharp spine impaled the pulpy flesh of my palm, I raised my hand into the air, recoiling from the pain. The fish slipped out of my hand, back on the surface of the ice and in one swift flip of his tail catapulted himself back into the hole.

After releasing the string of expletives accompanying my now bleeding hand, I began to laugh. Whoever thought that fishing was something that old men do to pass the time and resist boredom has never struggled with a white perch. After 52 years of fishing, I still learn valuable lessons. When I look back on my errors that day, I realize that when I stooped down to pick him up, I was looking down at him with my dominant right eye.