Nordic and Alpine ski racers hit trails and slopes
CVU’s ski racers saw only members of their own team on trails as they raced through the woods and down the slalom courses. This wariness of clustering several teams together was designed to limit the possibilities of interpersonal contact and, hence, the chance for corona infection. 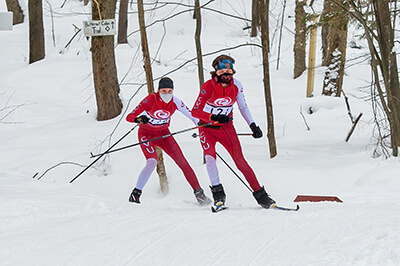 High school Nordic teams race in clusters to limit contact with students from other areas. Photo by Al Frey.

Charlotte’s Matthew Servin finished sixth among men, with his teammate George DeBosse slightly ahead of him in fifth. Skyler Heininger and Sam Holmes were other Charlotters near the top of the board, and Sam Haydock completed the course in 34th place.

The Essex Carnival allowed the Alpine racers to test their slalom skills at Smuggler’s Notch the following week. Both men’s and women’s Redhawk teams ranked first, ahead of second-place St. Johnsbury Academy and four other schools.

Governor sets Feb. 12 as potential start date for winter sports
During a media briefing on Friday, Governor Scott said that high school and youth sports competition could start the end of this week. Snow sports such as Nordic and Alpine skiing have been going with racers competing by themselves and only others from their team. No general spectators were present.

Moving to low-contact indoor sports, teams will be allowed to conduct virtual meets, according to Julie Moore, chair of the state’s task force on restarting scholastic sports.

Megan graduated from CVU in 2014. While a student there, her primary sport had been gymnastics. However, she and a group of gymnasts decided to attend a freestyle ski aerials tryout camp in Lake Placid, which led Megan to a national development program in Utah. Since then it has been down European slopes for her. Her first U.S. stop is this week in Deer Valley, Utah.

As an aerialist she demonstrates her ability to carry out tricks while in the air, coming down the slope. It requires body control that can only be developed through lengthy practice.