A few years ago, I was working for an outdoor retailer, running programs that taught people to appreciate what nature can teach us through participation. As a child, I had a traumatic experience with a religion that almost cost me my life. I was an angry young man, who felt that the universe was a cruel joke designed to break my spirit. I discovered that I felt at home in the woods and waters. Nature surrounded me with the wonderment that we are all born with, and I discovered the feeling of belonging. Belonging to the universe and all her beauty, power and grace.

As I was working for this retailer, I was given the responsibility as keyholder to the room where the safe was kept, and I was told that if I were to ever lose this key, I would immediately lose my job. I put it on a key ring with a detachable pinion and affixed a snap to the pinion whereby I would only take the safe key with me when I was headed to work. 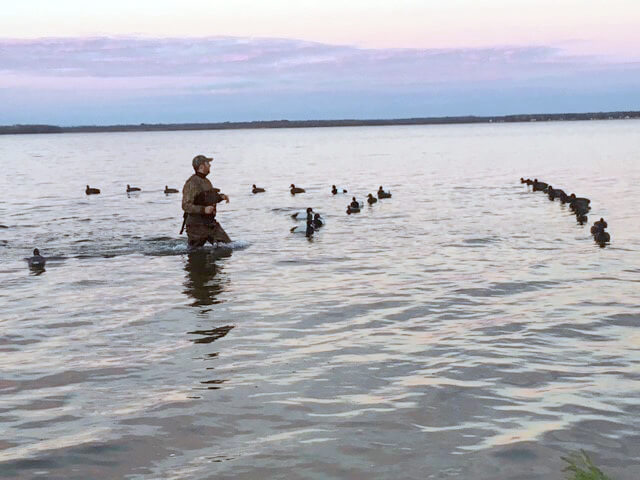 “I chose to surrender and somehow knew everything would be all right. I don’t know why. It was a strange feeling. Like a faith I had never found.” Courtesy photo.

It was a stunning helio and sage sunrise over Maquam Bay on northern Lake Champlain, which is about one mile wide and ranges in depth from 10 feet to its shallow shores of mere inches. I was lying on my back in a layout boat just above the surface of the water, which was about two feet deep. I was camouflaged and nearly invisible to the Canadian geese that were using this area of the bay for an early morning loafing area. My friend John was about ¼ mile away in a large v-hulled tender boat, watching over me as I waited for the geese to fly in from a feeding field about one mile away.

Soon, with all the coffee I had consumed and the gentle rocking of the boat, biology condemned me. I stepped out of the boat to relieve myself and noticed a strange looking crooked, knotted old stick on the sandy bottom. Next to it was a razorback mussel. I picked it up and pried it open to inspect its life form. I smelled it as if I were a child—amazed at its simple complexity. I raised it to my mouth and thought about tasting it, to see if it would be salty, but upon inhaling its freshwater essence, chose not to try it. I dropped it and got back in the boat.

The geese came and chose to light in another area of the shoreline. John poled the big boat toward me, and the wary flock took off in a clatter of wingbeats and splashes. They did not fly anywhere near me. We picked up all our decoys and loaded the layout boat on top of the tender and headed back to the access ramp a mile or so away.

When we got to the access, we were saying our goodbyes and telling each other that although our plan to harvest geese failed, it was still a great sunrise and much better than going to work.

It was when I reached into my wader pants pocket that I realized my keys were not with me. I had planned on going straight to work from the hunt, but now, my keys to my truck, my house and my own trailer were not to be found. In a moment of sudden terror, I realized that on that same keychain, attached to the snap on the pinion, were the keys to the safe of my employer.

We searched frantically through every decoy bag, every pocket, every corner, nook, and cranny of the boat. After half an hour of searching I relented. “We have to go back.”

And so, we loaded up the boat once again and headed south to the bay. The bay had to be entered by swinging in from the south end over a sandbar. As we motored toward our destination, the big 60 hp motor began to sputter and stall. John, who is an airline pilot, is quite gifted at managing crises. He maintained a steady pace on just one cylinder. And then, the wind picked up. From the south. The waves grew and tempo. We were headed into the teeth of a 20-knot wind. Waves broke over the bow. The bilge pump at the stern was whining, overwhelmed by trying to match the volume of water that was coming over the bow.

We turned east and the waves were now hitting us broadside, against the gunwhales. I sat down on the floor of the boat just above the waterline and looked up into the sky. I wondered to myself, “Is this how it ends?” I felt a strange calm come over me. I looked up at the sun peeking through gathering clouds, shooting pillars of light onto the roiling lake. I noticed how the wake behind the stern was glistening in the sunlight. A gorgeous sage color; white froth blew off the top of the waves. I chose to surrender and somehow knew everything would be all right. I don’t know why. It was a strange feeling. Like a faith I had never found.

Just before the sandbar the waves threw us violently onto the grainy bottom. John captained the boat using every crest to further us toward the shore of the bay. “You’ll have to get out and walk the rest of the way, Bradley. I can’t go any further without getting us permanently stranded.”

I crawled over the side of the boat, and John asked, “Does anything look familiar to you?” We had come into the bay in the dark, and as the horizon had started to grow lighter by a beautiful purple and indigo blue, I pointed out a small stand of Johnson grass. It was about two hundred yards away.

As I was walking a quiet thought popped into my relaxed brain. “Turn ten degrees east.” Without thinking, I did. I walked another 150 yards toward the stand of weeds and stopped to gauge my distance. I looked down and saw this strange crooked, knotted old stick underwater. And next to it another razorback mussel. “How weird is that?” I thought. Something shiny caught my eye just to the right of the stick.

My keys. I reached down and picked them up. My heart filled with gratitude deeper than any I have experienced. I breathed in deeply to say thank you to whoever would listen, when I noticed the mussel slowly moving toward me at a mussel’s pace. I reached down to pick it up. I looked longingly at the creature and felt that maybe I needed to make amends for unnecessarily taking the life of one of its tribe. I raised the mussel to my mouth, pursed my lips, and kissed it. I said “Thank you, brother,” then set him gently back down on the sandy bottom beside the crooked old branch.