Many of us are at an age when our revered sports figures leave us to enter the great big tunnel. On Jan. 22, #44 left life for a different field of dreams. Hank Aaron has always been a part of my life’s journey. 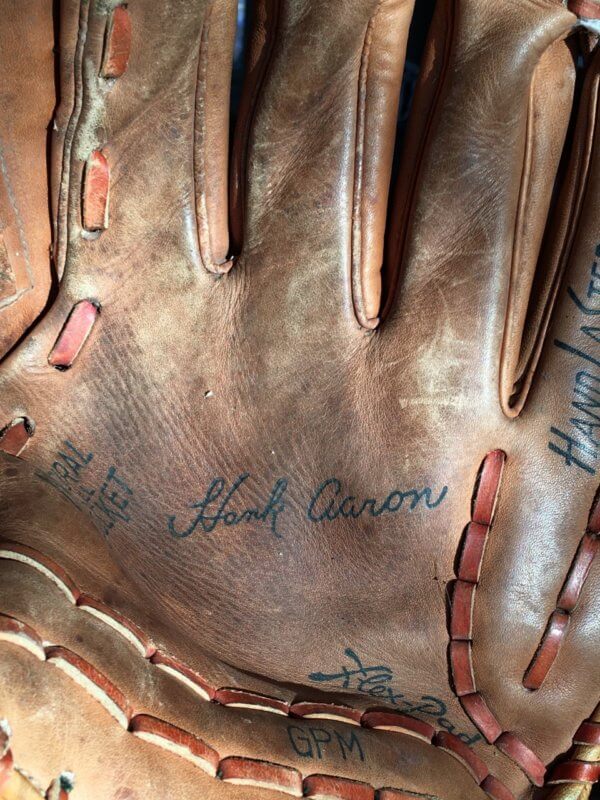 The signed glove of a hero: Throughout his time in and out of the limelight Hank Aaron exuded humility, gentleness and decency. Photo courtesy Jonathan Silverman.

Although I have lived in Vermont most of my life, I grew up in the suburbs of Hartford, Connecticut. Allegiance to sports teams in Hartford has always been a tug of war between Boston and New York. My dad grew up following the Boston Braves “farm” team in Hartford, and subsequently I became a die heart Braves fan, even though the team moved to Milwaukee in 1953, when I was two. And as soon as I was able to shove a Rawlings baseball glove onto my left hand, I needed a player to embrace, and that player was Hank Aaron.

Hank and I were rookies together. He could hit a curve ball very, very far and I, on the other hand, attempting to emulate the snap of his wrist and his fluid swing might occasionally manage to smack one to deep shortstop on a field full of grit and undulations. I played with a cast of multiage sandlot characters whose stars were Mickey Mantle, Ted Williams or Willie Mays. I was 7 years old when Hank Aaron won the most valuable player award and his team, my team, the Milwaukee Braves won the pennant.

Each day I fastidiously checked the box scores in the Hartford Courant to see how Hank performed. Admittedly, I knew little about his story and life as an African American in the deep South. I cared about his performance on the field and the team’s fate and was oblivious to the reality of racial inequalities.

In the 1960s and early 1970s Aaron continued to excel and his national fame amplified. He was a model of consistency year in and year out, and my allegiance to him never wavered in my teens and early 20s. The layers of my ignorance began to be exposed. As this was a (another) ripe time for civil rights awakening, I slowly became aware of my childhood idol’s background of poverty, hardship and prejudice. As I witnessed how he managed the threats and intimidations while closing in on Babe Ruth’s insurmountable record, I shifted my admiration from merely ball player to character.

Even though he had so many at bat and on field accomplishments Aaron never pumped his chest, stopped to stare at the ball leaving the park, or ostentatiously twirled the bat. Rather, if he hit a home run there was a slow rhythmic and graceful trot around the bases; there was an inner peace, a sense that on a given moment, in four tenths of a second, he figured out the previous pitch.

Throughout his time in and out of the limelight Hank Aaron exuded humility, gentleness and decency. He was dedicated to the art of both sport and sportsmanship. With his internal pledge to play ball with quiet intensity and respond to the myriad of injustice he endured with dignity and determination, he spoke truth to power. In his own quiet way, he sustained his commitment to social justice beyond the ballfield by empowering youth and breaking barriers as he became a vice president in the Atlanta Braves organization.

Reliving Hank Aaron’s story is refreshing in our time of uncertainty. Here was a sports figure who became larger than life to me because of the character of his soul that accompanied his grandeur on the ballfield. As I reflect on my lifelong appreciation of Hank Aaron, I wonder broadly: Who becomes our heroes? Who do we look up to for guidance on our evolving understanding of the human condition, how we learn to live together and sustain higher morals?

He had no idea of how he helped advanced my awareness of white privilege and shape my perception of a more just world. Those of us who grew up with comfort yet sheltered from the trials of everyday discrimination ideally are compelled to find meaningful ways to challenge our paradigms and open our prism to the life of others. (Speaking of challenging paradigms, I fully support the changing of the team’s name from Braves to something more inclusive.)

In the 24 hours after Hank Aaron died I received condolences from family members and friends knowing how much #44 was a part of my own journey. Perhaps, the swell of memories of Hank Aaron’s life offer all of us a chance to pause and contemplate goodness.