In 1989, Debbie Lamden’s life was turned upside down. Her son, Ari, was born after just 24 weeks of pregnancy, weighing only a pound and a half. A stained-glass artist by profession, Lamden decided to dedicate her life to finding ways to help Ari and others with special needs engage in the same kinds of activities as other children. She founded Partners in Adventure (PIA) in 1999 to help accomplish that goal. 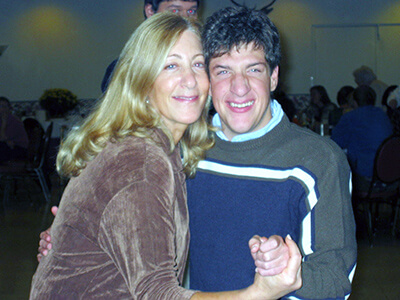 Debbie Lamden started Partners in Adventure to give her son, Ari, opportunities to socialize and make connections with other children with special needs.

“In my wildest dreams I couldn’t have imagined the way it’s grown,” Lamden said. Partners in Adventure began as a summer camp but expanded to include a winter camp and year-round programming, with events like movie nights and dress-up dinner and dancing socials, serving 600 people a year. “There was such a need for it,” Lamden said. “Now there are similar programs, but when we started, it was very unusual.”

This year, Covid-19 prevented the summer camp and other in-person events from happening, and Lamden worried about her son and others who have attended year after year. “We open up a whole world of social experience that these young people have never had,” she said. “Outside of Partners in Adventure, it’s hard for them to make new friends and integrate into the community.” Determined not to let her campers down, Lamden huddled with her staff to find a way to continue the programming, a task made harder by the fact that the organization’s two main fundraisers, a Calcutta game night and a golf tournament at Vermont National Country Club, also had to be cancelled.

Lamden credits her staff and PIA partner Sue Minter with pulling together events that kept campers engaged throughout the summer. A six-week online program featured activities that included dancing, science, and arts and crafts. Staff and some of the workshop providers like musician Jon Gailmor still received payment for their services and four University of Vermont interns chipped in to create high-quality videos. Video content included sessions focused on beekeeping, PIA’s wheelchair accessible raised-bed gardens at Ethan Allen Homestead, and a series about chickens with segments on collecting eggs and cooking a vegetable omelet. “They sound pretty simple,” Lamden said “but they were wonderfully done with borders and colors and pop-ups.” 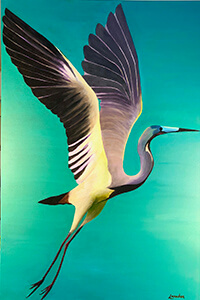 The videos were offered for free through a private Google site and 36 kids took part. Many of the programs included arts and crafts activities, so Lamden provided those materials free for pickup for those who couldn’t afford to purchase them. “It’s hard to know what will happen as we move forward,” she said “but I believe we’ll get through this and it will just be a glitch in the big picture.”

In 2011, PIA branched out to create Adventures in Granola as a way of providing employment to people with special needs. That venture continued this year but in a scaled down version because they could no longer use a communal kitchen. Many PIA campers sell the granola at farmers markets. Those who are non-verbal have a button they can push to provide prospective buyers with information on the product.

Lamden has a fine arts degree from the Boston Museum School. After graduation, she moved to Vermont and started Charlotte Glassworks across from the Old Brick Store. She stayed at that location from 1977 to 1981 before moving her operations to Burlington and is pleased to report that many of her creations can still be found in residences and commercial establishments throughout the state. After Ari’s birth she shifted gears and worked for the Vermont Parent Information Center before starting Partners in Adventure. In 1995, she returned to her artistic roots when she started Debbie Lamden Jewelry, but the pandemic has given her time to pick up her paintbrushes again. “I never stopped being an artist,” she said. “Art has always been the balance in my life.”

Having time to paint has helped propel Lamden toward her next career move. “I’m well past the age of retirement,” she said “and I have wanted to have more of my own time.” Lamden will be turning the reins of Partners in Adventure over to Joan Martin, who has served on the board since 2017. “I see myself staying until the summer,” Lamden said “but then I’ll be ready to leave.”

Lamden loves that there are campers, aides and staff members who have been with the organization for five to 10 years and hopes they will stay for many more. “It’s pretty amazing what we’ve accomplished,” she said. “I’m very proud of what we’ve done.”