Whether you know them for their delicious berries or as a painful obstacle in the woods, everyone probably has some relationship to raspberries and blackberries. These incredible plants are often referred to by foresters and ecologists collectively as Rubus, which is the genus they belong to. 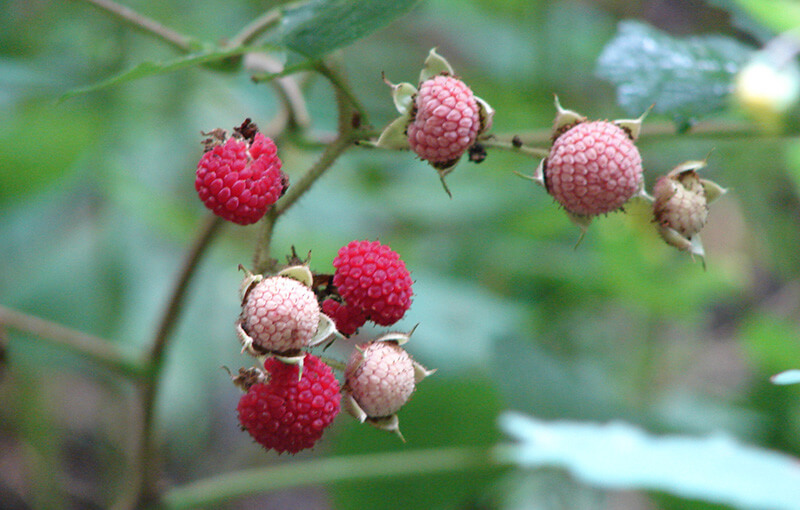 While there are many species of Rubus in Vermont, I separate them into raspberries, blackberries, and purple-flowering raspberry (Rubus odoratus). This last one is the oddball of the group; it lacks thorns, and has golden, shreddy bark; maple-like leaves; and large, pink flowers. Also called thimbleberry, it produces raspberry-esque fruit which (ironically) is much flatter and less thimble-shaped than raspberry or blackberry. The berries are edible, with a felty texture.

Both raspberries and blackberries can be identified by their distinctive berries and thorny canes. You can tell them apart by the color of their berries (although there are black raspberries), their leaves, or their canes. While both species have thorns, blackberry canes are ridged–a cross-section would reveal that it is angular, not round. Raspberry canes are round in cross-section and smooth (in between the thorns), often with glaucous bloom, a bluish waxy coating.

The leaves of both raspberries and blackberries are compound, meaning that the leaf is made up of several leaflets, each of which looks like a separate leaf. Blackberry leaves are palmately-compound, meaning that the base of each leaflet attaches at a common point (like a fan), whereas raspberry leaves are pinnately-compound – pairs of leaflets attach opposite one another at different points (like a fern).

Rubus are everywhere, but especially common in disturbed areas where trees have been cut or otherwise died. They have two main strategies for reproduction. The first is layering – creating new plants by sprouting from their root system, sprouting from the base of an existing plant or by establishing adventitious roots where the tip of a cane touches the ground. If you’ve ever battled Rubus in your yard, you know that their knack for layering makes them very resilient.

The second and more incredible method that Rubus uses to reproduce is their seeds. It seems like every animal in the woods, from birds to bears, gorges themselves on raspberries and blackberries. The seeds pass through their digestive systems and (some time later) are deposited throughout the woods, wherever that critter happens to be. It’s a great seed dispersal strategy – essentially hitching a ride on a bird or other animal.

If Rubus seeds end up in a suitable place – maybe somewhere with scuffed-up soils and plenty of light – they can germinate right away. However, most Rubus seeds get dropped in places that aren’t ideal spots. When this happens, they become part of the seed bank – the seeds that wait in the soil, remaining viable but ungerminated. Rubus seeds can remain in the seed bank for 20 to 40 years, and in some cases up to 100 years. When opportunity knocks – in the form of a windstorm, logging, a forest fire – they sprout.

What this means is that, for the most part, Rubus that appear after forest management or a natural disturbance aren’t arriving at that site. They’ve been in the soil under your feet, maybe for decades, waiting for their opportunity to grow.

Rubus was once disliked by the forestry community, mostly because of how it springs up following forest management. Foresters wanted to grow trees, not bushes, and so they considered Rubus to be interfering vegetation, taking up growing space that could be growing trees; Rubus was sometimes cut and sprayed with herbicide just to get it out of the way. However, science has revealed that Rubus doesn’t interfere with the ability of trees to grow. On the contrary, it is an integral part of an ephemeral stage in forest development. Rubus provides valuable nutrient-cycling and some seedling protection – shielding young trees from herbivory with their thorny canes. They are also an incredibly important food source for all manner of wildlife, from neo-tropical songbirds stocking up for migration to black bears building up fat reserves for hibernation.

Like many things in forests and forestry, understanding the role of Rubus requires us to be patient and to zoom out. The briars, brambles and prickers that scrape your legs will give way to young forests, and someday to old forests. Instead of cursing these prickly plants, enjoy this moment in time, and marvel at their patience and persistence.