“I grew up in a family that appreciated food,” Matt Jennings said. “My mother is a great cook and my father is a landscape architect who had a prolific vegetable garden, so food was integral to the family.” These days, Jennings continues that tradition as the vice president of culinary for Healthy Living Market and Café. 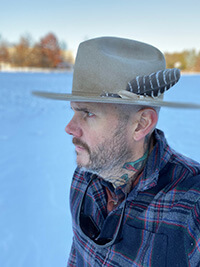 Jennings has fond memories of his first summer job as a stock boy at a grocery store. The owner had a small café next door, and Jennings, walking by on his way to work, was fascinated by what the chefs were doing. He told the owner he wanted to work in the kitchen and eventually he was allowed to take a position there. “I’ve never looked back,” he said.

Jennings spent 25 years in the restaurant and hospitality business. One of his ventures, a Boston restaurant called Townsman, was named one of Esquire Magazine’s “Best New Restaurants in America,” USA Today’s “10 Best New Restaurants,” and Food & Wine’s “10 Best Restaurants of the Year.” After some health issues in 2016, Jennings began to reassess his career and lifestyle. “I decided to get sober which was step one,” he said. “Then I was feeling so great that I was inspired to give more attention to my health regimen and physical activity. I was about 400 pounds and had fallen victim to all the traps of the restaurant world, including late nights and bad choices.” After gastric sleeve surgery, Jennings threw himself into getting healthy, exercising regularly and taking up cycling. “My new addiction was feeling good and healthy,” he said. “It changed my life.”

Together with his lifestyle change, Jennings made a career change, starting Full Heart Hospitality. “I had been doing some consulting in the Boston area,” he said “and it increased so I brought in a partner. He handles the West Coast clients, I handle the East Coast, and we collaborate on everything in between.” The business works with restaurants, food retail establishments, producers of consumer packaged goods, golf courses and inns by providing assistance with design and operations, financial management, brand and marketing strategies, team mentorship, and leadership training.

Jennings was consulting for Healthy Living—in June they hired and created a position for him. “With the pandemic, I was tired of working from home,” he said. “I really missed that aspect of the culinary world where you have your hands on a product and are part of a team.” In his new job, Jennings oversees all the food made at Healthy Living locations, ranging from prepared meals to a new home meal replacement program that provides customers with prepackaged entrees to heat at home. 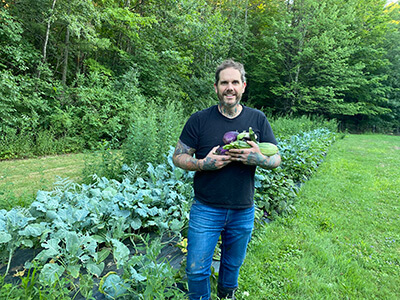 Chef Matt Jennings, here in his garden, is all about healthy choices and local food. Courtesy photos.

Over the years, Jennings has been nominated for several prestigious James Beard Awards, including one for the book Homegrown: Cooking from My New England Roots, which he coauthored in 2017 with Jessica Battilana. He is also certified as a workplace wellness coach. “The goal is to teach your team the significance of paying attention to personal health and making healthy choices,” he said. “I teach people best practices for personal habits and try to get them focused on nutrition and being active.”

Jennings and his wife moved to Vermont last July. Kate, a pastry chef, is from Arlington, and Jennings graduated from the New England Culinary Institute. “We always talked about coming back but never had the opportunity,” he said. “Once we sold the last restaurant and I was on my health journey, we decided we didn’t want another frenetic restaurant experience, so we moved to Charlotte. We had a very close friend here and fell in love with the area.”

In 2021, residents of Charlotte will have a new opportunity to sample Jennings’ delicious cuisine. He and Kate will launch a home catering project called Red Barn Kitchen from the barn on their property. For Jennings, the most important thing about cooking is the quality of the ingredients. “That’s been a focus my entire career,” he said. “Cooking is about letting the ingredients speak for themselves. If you’re responsible and get quality sourced ingredients, the product will show that. Cooking isn’t about manipulation as much as about encouraging flavors to reveal themselves.”

Jennings said Vermont’s locavore culture was part of the reason he wanted to move back to the state. “I want to work with local producers,” he said. “I wanted to take advantage of the people here and develop those relationships.”