The Charlotte Grange Hall marked its 150th anniversary this year. Of course, no celebrations were possible, as the Hall has been closed since March. The last event held was a popular afternoon concert featuring a group of young musicians taught by Pete Sutherland and Oliver Scanlon. 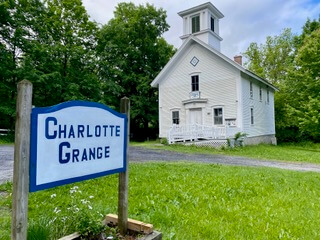 Now the venue for occasional discussion groups, movies and a regular music series, the little white Hall on Spear Street just south of the Hinesburg Road intersection (and part of the Baptist Corners Historic District) started life as a “Lyceum” built by the Charlotte Young Men’s Literary Club.

The 19th Century Lyceum movement was an early form of organized adult education, led by voluntary local associations that gave people an opportunity to hear debates and lectures on topics of current interest. It was extremely popular, and in its heyday numbered over 3,000 local Lyceums. In Charlotte this use was short-lived, as the Literary Club didn’t own the land, and so it began service as one of Charlotte’s schoolhouses—known as The Lyceum School—until Charlotte Central School was built in 1949. Despite being a very active organization in the town since 1908, the Charlotte Grange had a series of temporary homes for its first 50 years until it moved into the Hall in 1958.

Despite having no formal celebration for the anniversary, much has been accomplished. This summer saw the complete refurbishment of the large windows on the first floor, funded in part with Vermont Historic Preservation Grant Program Funds along with generous donations from Charlotte community members. Grange member and treasurer Trina Bianchi, along with members Jim Donovan and Margaret Woodruff, have been instrumental in seeking and obtaining funding and managing this process and deserve the community’s wholehearted thanks for their work. Slater Construction managed the work, and Brian Slater and David Owen did the painting.

We have also secured a 1772 Foundation Grant from the Preservation Trust of Vermont for repainting the remaining three sides of the Hall, and work is slated to begin in 2021. (The south side was already tackled in 2019, with associated earth work carried out by Ward Preston in 2020.) The grant will match the funds we raise toward this project—our next goal is to raise $20k to carry out this work! To help us achieve this, a new body has been set up. Reflecting the history of the Hall, the Friends of the Lyceum Schoolhouse (which has applied for 501(c)(3) status) has the single purpose of raising and disbursing funds for the maintenance and restoration of the building.

We have great hopes that the new organization will be able to build on the past fundraising success and garner further support from organizations and individuals alike for this often-overlooked historic building and help keep it as a community resource for the future.