Talk the talk, run the run

Talk the talk, run the run

If you’re going to talk the talk, you walk the walk. Or in Dave Baird’s case, you run the run—and you keep running for 62 miles. To celebrate the end of a coronavirus-altered but still fun fall middle school cross-country season, the Charlotte Central School coach, 5th-grade teacher and athletic overachiever spent last Saturday running a mile for each member of the team. If there were a Ph.D. for perseverance, we’d be calling him Dr. Baird for sure. 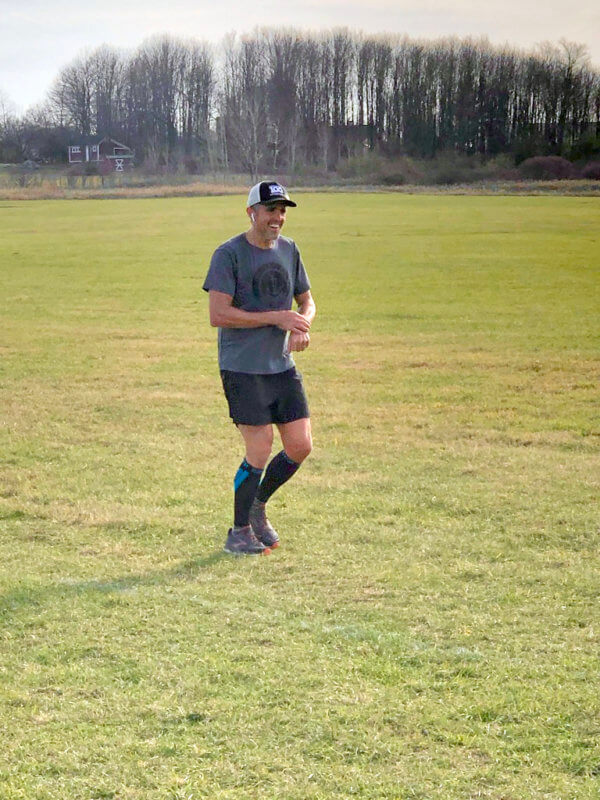 Dave Baird was all smiles after he finished running 40 or so miles on Saturday, even though he had a lot more to go. Photo by Chea Waters Evans.

Baird said he hadn’t been training but would give the long run a shot anyway. (For perspective, please keep in mind that “not training” in this case means not running 20 miles a day. This is not a couch potato we’re talking about here.) There was no doubt he’d make it. An accomplished ultramarathoner, Baird regularly tackles grueling 100-mile races and has participated in races that take 24 hours or longer.

The CCS kids run at Palmer Field in Shelburne on a route that’s about 1.8 miles. Baird added a little extra to the student course and ran 32 of those 2-mile loops over a period of 13 hours. He lined up yellow post-it notes on his break station setup to remind himself for whom he was running in his classroom. 1: Archie and Aviana, 2: Charlie and Clover, 3: Dahlia and Ethan. Baird’s wife Shannon was there for much of the day to cheer him on, help with snacks and coffee, and run a few laps with him, too. Throughout the day, cross-country team members showed up with their families to join him for a loop or two, or in some cases, a lot more.

“I got the chance to run with dozens of kids,” Baird said, “and was inspired as I watched many kids run multiple loops and explore their own personal limits. We had multiple runners who ran 12 miles, and one who ran 14. Pretty amazing and inspiring!”

It’s been a challenging year, coronavirus-wise, and everyone has had to make adjustments; the middle school cross-country team was no exception. The camaraderie and competition of regular meets was dampened a bit with spectators limited to one person per family and only half the team’s runners competing in each race. Since students are in school either Monday and Tuesday or Thursday and Friday, meets were held in two parts with whomever was in school on Tuesday or Friday. Runners left the field as soon as they were finished, and scores were added up at the end of the week, which was a bummer for anyone who loves an award ceremony.

Along with the seemingly impossible physical optimism comes a relentless sense of mental positivity. Baird routinely says things like, “That was a good struggle!” when his students are working hard and making mistakes in math class. For him, the value comes not from the result, but from the process. He said he keeps a picture of himself at mile 99.5 in a 100-mile race behind his desk at school. 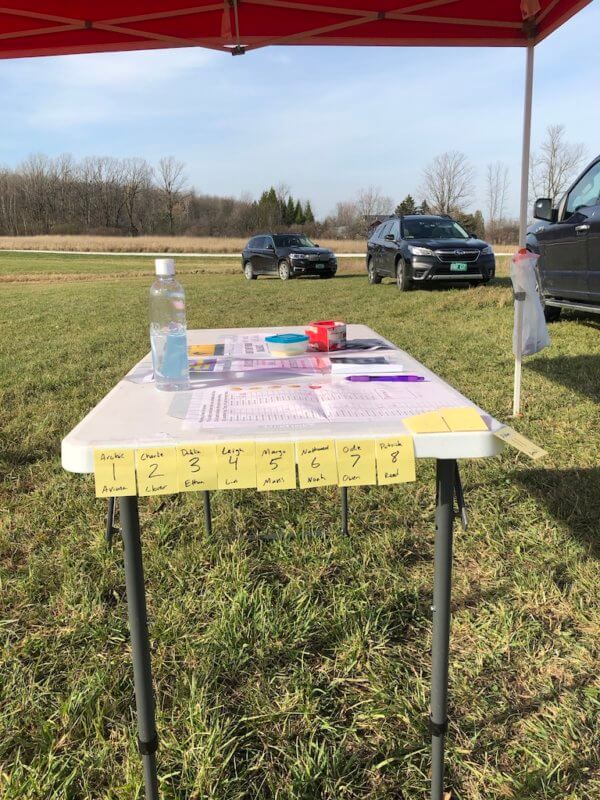 The names of his students were on display for a little motivation reminder. Photo by Chea Waters Evans 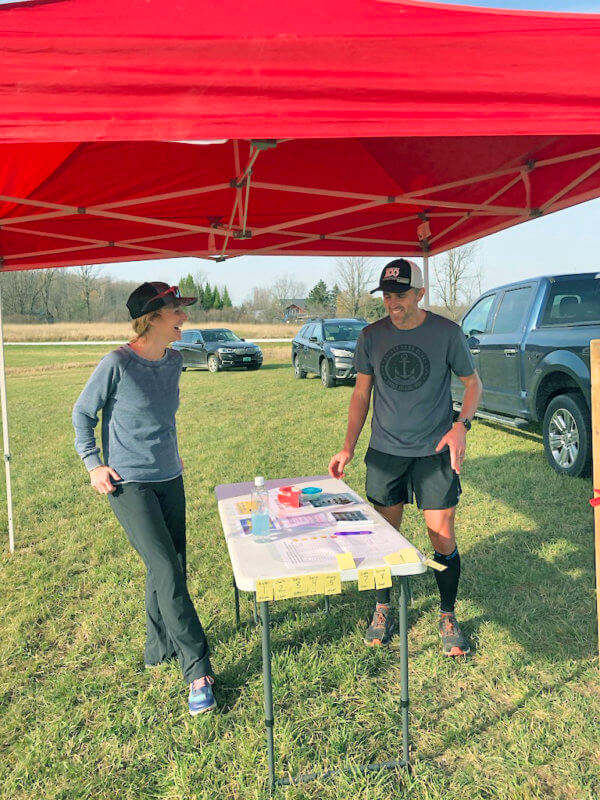 Baird’s cheer squad, wife and snack supplier Shannon was there for moral support on Saturday as Dave ran 62 miles for the CCS cross-country team.

“I tell kids that I keep it up there as a reminder that things always seem really hard until you are just about finished, and then they don’t seem so hard anymore,” he said. “100 miles seems really far to go until you only have a half mile left. Having that in mind can help you face big challenges, whether those are trying to learn a new strategy in math or pushing yourself on a run at cross-country practice.”

The year-end celebration usually involves lots of kids and lots of families, which obviously couldn’t take place year. Baird said he wanted to acknowledge his runners’ hard work and get a good long run in himself.

“I normally do two or three 100-mile races every year,” he said, “so I was sort of missing the challenge that comes with the long races. I did a race called the Great Virtual Race Across Tennessee that started in May where I ran the distance across Tennessee (1000 km, about 635 miles) in 34 days, then I started the virtual trip back to the start and hit 1000 miles in 70 days, and completed the 1,270-mile round trip across Tennessee and back in 103 days. But that was a virtual race, so I really just ran a bunch around here, and it didn’t really feel like a real race.”

Almost 1,300 miles certainly is a bunch and seems real enough. And then as he was writing an email to me about his running this summer, Baird realized that he forgot that he ran all up and down Vermont one day this summer, too. “I did do one other fun thing that I honestly had forgotten about until I started writing this,” he wrote. “In late August a friend and I did the Vermont 5, summiting all five of Vermont’s 4,000-foot peaks in a single day, and we think we actually did it in the fastest known time (going from the trailhead to summit and back for each summit, about 8 hours 21 minutes total running/hiking time). I probably should have just been happy with that.”

To celebrate with his CCS team, though, Baird said he wanted to do what I mentioned earlier: run the run. He said he thought it was important for the kids to “see me doing a lot of the ‘push yourself mentally’ stuff I talk about at cross-country. I never had anyone inspire me that way when I was in middle school, and so part of me was thinking that if even one kid gets inspired by this to do something they normally wouldn’t, that’d be a win in my book.”

Not only was that a real race on Saturday, but Baird definitely won.