Megan Bookless is happy to be a farmer

Megan Bookless is happy to be a farmer

When Megan Bookless was 14 years old, she told her parents she wanted to be a farmer. They assured her that she didn’t really mean it, so she followed their advice and went to St. Michael’s College, where she majored in journalism. It turns out Bookless’ instincts were correct. Since April of 2018 she has been the farm manager at ShakeyGround Farm, and she swears she appreciates every part of the job. 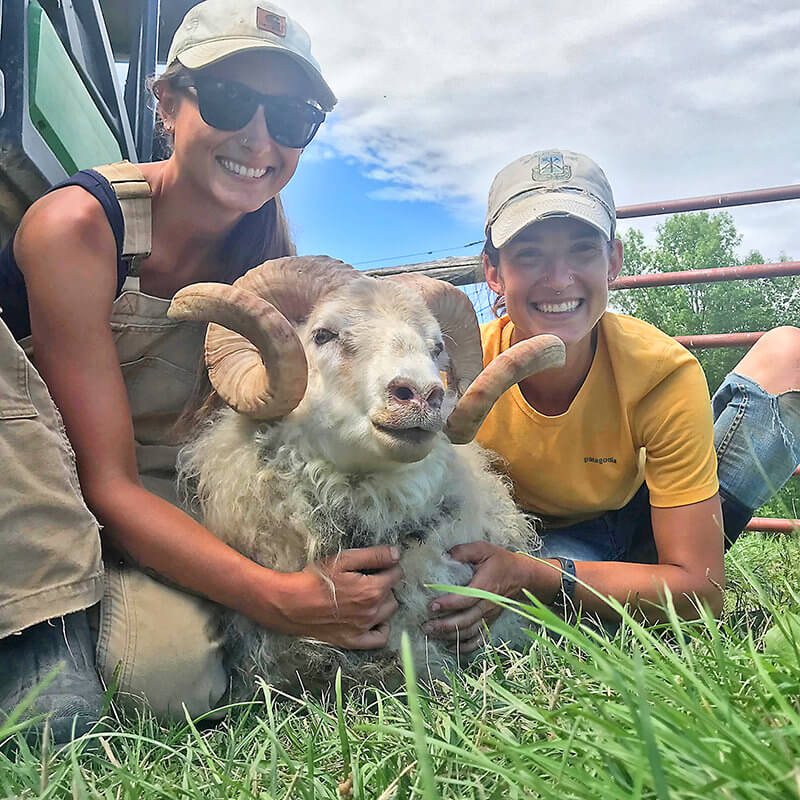 Megan Bookless, far right, here with Becca Burke and Soren, said, “I have never felt more valued or loved or supported—by sometimes complete strangers—than I have since becoming a farmer in this community.”
Courtesy photo.

Bookless grew up in Rhode Island, and for several summers she worked on a farm with 80 head of cattle and 20 horses. “I was mucking stalls, landscaping and throwing hay,” she recalls “and I knew then that I wanted to work on a farm.” After graduating from St. Mike’s, Bookless spent three years in New York City before returning to Vermont and trying out jobs as an account manager and fitness instructor. “I knew that wasn’t what I wanted to be doing,” she said.

When City Market organized some crop mobs she joined in, including one at Adams Berry Farm when it was located in the Intervale. She also helped Jericho Settlers Farm hastily harvest potatoes before Tropical Storm Irene hit. “Whenever I had the opportunity to work on a farm, I realized that was what I wanted to be doing,” she said. “I just didn’t know how to go from account managing and sales into farming. It felt a bit daunting.”

Bookless’ first foray into the field was doing property management for Peter Swift and Diana McCargo, Charlotte residents who now own and operate Philo Ridge Farm. “I took care of their horses, gardens and trail system,” she said. “I also pitched in with the livestock before they grew to what they are today, but I wanted to be a farmer rather than a caretaker.” When Bookless learned that David Beckwith was looking for a farm manager at ShakeyGround Farm she applied. “It was a huge leap of faith for both of us,” she said. “It was my first full-time farming job. It was exciting and I dove right in. I am so appreciative that he took a chance on me.”

Bookless admits her first year was incredibly difficult, in part because of her lack of experience with sheep. “We had sheep and cows and just under an acre of certified organic growing space,” she said “and I took on all of that without any previous hands-on experience. It was pretty wild.” When the first year was over, Bookless looked back and wondered if it could have gone worse. “I made one mistake after another,” she said. “I made poor decisions and bad calls, but I had a lot of support from other farmers, and after that season I realized I still wanted to farm even though it hadn’t gone well.”

Bookless is quick to praise those around her for the farm’s success. “I have said many times and will continue to say,” she said “that I have never felt more valued or loved or supported—by sometimes complete strangers—than I have since becoming a farmer in this community.” Bookless pointed to assistance and support from Jess and Adam of Adam’s Berry Farm, Jane Engelman, the former Market Garden Manager at Philo Ridge Farm, and Tom Kenyon of Aurora Farms. “The list goes on,” she said. “Being able to learn from other farmers has made me feel so much a part of the community.”

Bookless has taken advantage of the expertise at University of Vermont Extension, including entomologist Cheryl Sullivan, and she credits the Farm Beginnings course she took from the Northeast Organic Farming Association with helping her gain a better understanding of farming’s business side. She is also quick to praise Becca Burke, who recently joined ShakeyGround as the lead grower. “This has been a hugely successful season for us despite the challenges of COVID and losing the farmers market, which is how we made most of our money the last few seasons,” Bookless said. “We were able to do better this year even without the farmers market. That has nothing to do with me, and everything to do with Becca. The farm wouldn’t be what it is without her.”

For Bookless, there is no turning back to her previous office life, and she credits her difficult first year with cementing the decision in her mind. “If it had gone off without a hitch, maybe I wouldn’t feel so confident in my choice to be a farmer,” she said. “This is what I want to do with the rest of my life.”