Steve Schubart: In partnership with his cows

Steve Schubart: In partnership with his cows Beyond the regular rewards of cattle farming, Schubart said he is interested in its potential to solve a nutrition issue. Courtesy photo.

Steve Schubart grew up in Vermont, but in 2011, he traveled to California to pursue a degree in economics. While there, he decided to work on a ranch to get some cattle experience. “I had worked on farms growing up,” he said “but I got this really great job at an organic beef operation, and it changed my education direction and life path.”

Returning to Vermont in 2013, Schubart enrolled at Vermont Technical College for a degree in diversified agriculture with a minor in dairy. “Before I graduated I drafted a business plan for Grass Cattle Company,” he said. Schubart took a job in bovine genetics for a farm that specialized in dairy. “It opened my eyes to the scale of our regional agriculture,” he said. With the help of a federal micro loan, he leased 30 acres in Shoreham and started his ranch.

Recognizing that he couldn’t sell all the beef he raised, Schubart joined the Adirondack Grazers Cooperative. When their executive director stepped down, he left the genetics company and took that position, running an 80-member grass-fed beef co-op for almost two years. “I learned a lot about supply chain management and herd management software,” he said, noting that the regional farms were challenged to meet demand because they didn’t have one massive feedlot like the larger ranches. “We had the challenge of how to prove that varying-sized, grass-fed beef farms could provide consistency,” he said. “It was a challenging job.” He said the board eventually closed the co-op.

In 2017, Schubart began to search for land further north for his Grass Cattle Company. A year later, he signed a lease for his current acreage in Charlotte and began the process of applying for a mortgage. “I’m a sole LLC with no investors,” he said. “Getting a mortgage wasn’t a simple process, but I got one in March of 2019.” 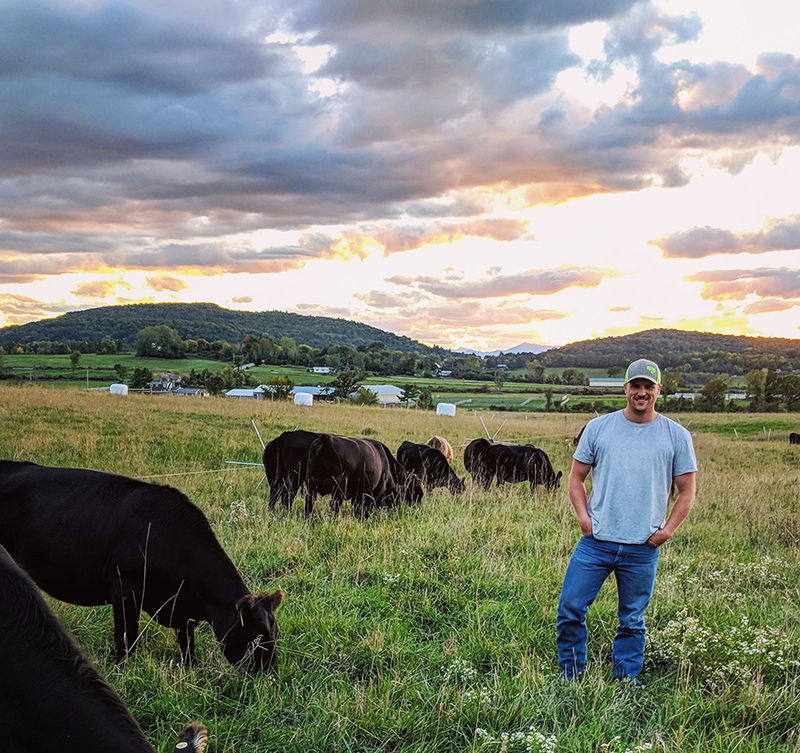 Vermonter Steve Schubart said a job in California changed his life and led him to starting the Grass Cattle Company. Courtesy photo.

It helped that Schubart’s land is permanently conserved. “That made it affordable for me,” he said. “The fence is appraised at a higher value than the house I’m living in. It’s all about the cows. The house is a fixer-upper, but the fence and the pasture are in good shape.” After buying the land, Schubart was asked to join the board of the Charlotte Land Trust. “I was honored that they asked me to join,” he said. “I hope I can provide a good, level-headed rancher/farmer viewpoint.”

Recently, Schubart received a grant from the Vermont Housing and Conservation Board to create a laneway for his cows in the pasture across the road. “It allows me to utilize that field for rotational grazing and to break up the field to make paddocks,” he said. “When I’m rotating the cows, they just go down one area where they compact the soil. It’s great for low-stress livestock handling.” Schubart has had success using laneways in the past, including the time he had to separate one cow so he could remove quills from her brisket after an unfortunate encounter with a porcupine.

This summer, Schubart averaged 60 head of cattle. The most he has ever had is 96, and at this point in the season, he is down to 16. He sells the beef through his website and to local families. Other retail locations include the Intervale Food Hub, Full Belly Farm, Last Resort Farm and a few farm stands outside our area. He also sells to some wholesale live cattle buyers.

Schubart recognizes that the term “rancher” is not often used in New England. “Ranchers use livestock, usually cattle, to graze and build topsoil and regenerate the land,” he said. “When you ranch, your income comes from the land and its ecosystem which you’re trying to manage without tilling the soil. Progressive ranchers and even those who are conventional are learning the importance of soil health and how it offers a greater return.”

A proponent of whole animal utilization, Schubart recommends that people try eating offal. “It makes me happy when every part of the cow is used,” he said. Personally, he’s a big fan of flat iron and ribeye steaks. Schubart’s enjoyment of his work extends well beyond its culinary rewards. “I really like being outside and working with the land,” he said. “Grass-fed beef has a real shot at being a solution to feeding a growing population that needs healthy, regenerative protein, rather than growing monocrops and soy and wheat to make fake meat. I see this as a solution to feeding people in a regenerative way.”