In our July 11 and 28, 2018 issues, The Charlotte News experimented with publishing two long-form installments of what eventually became a book-length memoir by Norm Riggs about how, in the summer of 1964, he and a friend, Dave Dyer, two college guys in Des Moines—unable to face another three months of typical, tedious, low-paying summer jobs—decided to take a big chance. They would hop from suburb to suburb across the country, painting house numbers on curbs and asking homeowners to donate for the service. 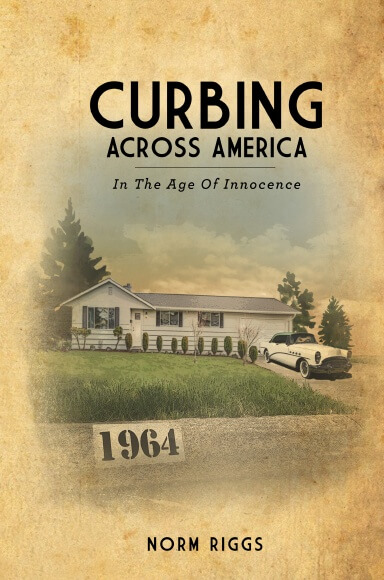 As Norm describes his and Dave’s thinking at the time, “Seeing new places, meeting new people, fascinating the neighborhood kids, and earning spending money for the fall. Perfect. It wasn’t illegal (was it?). Nobody else had thought of this so they had no competition (did they?). Americans were friendly, trustin, and generous (weren’t they?). What could go wrong?”

Curbing Across America in the Age of Innocence, Norm’s self-published book, answers those questions and many more as it chronicles the unpredictable adventures and encounters that he and Dave had that summer.

“By the time we had returned to Des Moines,” Norm writes, “we had full pockets and a lifetime of memories—many hilarious, some scary, a few dangerous, and one … well, almost triple-X, as we said back in those days. But you have to read the book to hear more about that. For more than a half-century, when I have recounted tales from that summer to friends, neighbors and co-workers, they have often told me the stories should be in a book. So now it is.”

And it’s getting some traction back in Iowa. Word of its publication is spreading among Norm’s friends, and Iowa State University mentioned it in its Extension retiree newsletter last week.

After finishing the book, Norm sent it, with some trepidation, to Laurence Paul, who retired in 2009 as the executive editor of the New York Times News Service and Syndicate. Forty years ago, Paul, who at the time was working for the Des Moines Register, rejected several press releases that Norm had written while he was working for the Iowa Governor’s Office for Planning and Programming. After reading Norm’s book, however, Paul wrote back: “I can say as an editor that it is a wonderful yarn. Your skill at building each little vignette to a climax is artful. Your digressions into nature and scenery are evocative. Your musings about how American society has changed are poignant. Alas, our kids and theirs will probably never know that sweet, innocent, secure world. What a shame.”

For Boomers in Vermont who were coming of age in the mid-60s, the book should evoke memories of the halcyon summer of ’64 when the Beatles were coming to the fore—and just before everything was about to change. America has not been the same since.

Norm retired in 2006 from Iowa State University, where he worked as a rural community development specialist. He and his wife, Sandy, then moved to Ferrisburgh, where they still live.