On the morning of Oct. 21, I got the call I have been expecting and dreading. Emerald Ash Borer (EAB) has been detected for the first time in Chittenden County. State forestry officials positively identified characteristic serpentine EAB larval galleries below the bark of infested trees on private property in Richmond. To reach this stage, it must have been present for at least two years. The recently identified outbreak puts the northeast corner of Charlotte within the state-defined High-Risk Area (see yellow area of the map). 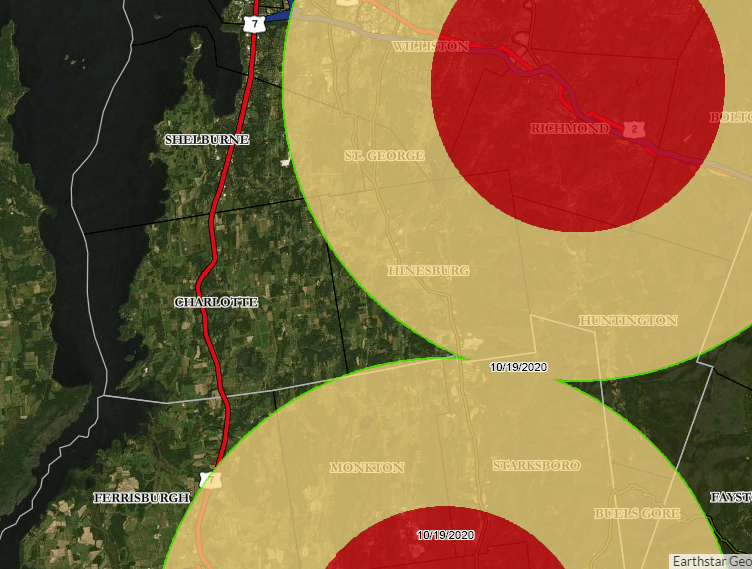 Emerald Ash Borer has been detected in Chittenden County. Though it hasn’t hit Charlotte yet, infestation is inevitable. This map shows high-risk areas near Richmond, where it was recently found. Courtesy photo.

While EAB may well be in Charlotte, we have not detected it yet. Many people have been keeping their eyes out for signs and symptoms of EAB, such as extensive woodpecker flecking of the bark and epicormic branching (small branches that sprout from the trunks of weakened trees). This summer Tree Tribe member Alexa Lewis and I installed six green EAB traps set up in key locations throughout town. We checked these traps at the end of June and in September and did not find any of the beetles.

EAB has been in North America since 2002. Since then entomologists, foresters and others who have studied this pest have gained a better understanding of the trajectory of the infestation cycle. It typically takes approximately eight to nine years from initial infestation for EAB to reach peak population levels and 10 years for the peak of ash mortality. Because EAB has already been in Richmond for two years, that means the insect populations there will reach peak levels in six to seven years and tree mortality will peak in about eight years.

In Vermont we have been lucky. EAB infestation has happened later and has spread more slowly here than elsewhere in North America. Credit needs to be given to the Vermont Urban and Community Forestry program, our County Foresters and other officials who have been working actively to educate people about the threat posed by this insect. We also need to acknowledge the foresters, loggers, firewood processors, mill operators and individuals who have been cooperating with the state’s Slow the Spread guidelines.

Continued vigilance, particularly with regard to the movement of firewood, will buy us more time to plan and prepare. Woodlot owners may extract value from their forests by harvesting ash before it succumbs to EAB. Homeowners may opt to chemically treat ash trees that are important elements of their landscaping. With part of our town now within the high-risk zone, it is advisable to do that now. For trees that threaten homes and infrastructure there is still time to plan and budget for tree removal.

Regarding ash tree removals, it is better to fell ash trees while they are still alive and intact. Because of the particular characteristics of ash wood, it tends to crumble and collapse catastrophically when it is dead. This is especially true for EAB-infested ash. It can be dangerous for chainsaw operators to fell dead ash trees from stump cuts because of the likelihood of falling branches and the unpredictability of crumbling trees as they come down. As a rule of thumb, it can cost 50% more to remove a dead ash tree than a live one.

This calculus is part of the logic of the town’s plan to preemptively remove potential ash hazard trees from the town’s rights of way. In addition to avoiding the higher cost of removing dead trees we hope to spread the costs out over a longer period of time than would be the case if we operated in a reactive mode and just removed trees as they die. In places where EAB has run its course, near 100% ash tree mortality has occurred in a very short time frame—two or three years. The town’s plan is to spread this cost over a five or six year period. The plan may be viewed in the Tree Warden section of the town website.  An additional consideration is that we expect the cost of tree removals to increase due to demand for tree service companies when we reach the peak mortality period.

Some parts of Charlotte are going to be affected more than others. Thanks to a grant from the Urban and Community Forestry Program and the help of two University of Vermont student interns, we now have a map of all the ash trees greater than six inches in diameter within the town’s rights of way. These maps may be viewed in the Tree Warden section of the town website.

West Charlotte has more ash than East Charlotte. Roads that are going to be severely impacted by the loss of ash trees include Thompson’s Point Road, Converse Bay Road, Cedar Beach Road, Whalley Road, Wings Point, Lake Road and Ferry Road. Preemptive removals have been completed on sections of the latter two. I encourage all Charlotte landowners, but especially people in these areas, to consider chemical treatments of exemplary ash trees now and to plan for tree replacements where natural regeneration or residual non-ash trees are sparse. If landowners opt to treat trees in the public rights of way (generally 25 feet from the road center line), I request that they inform me so that I can note these on our map and exclude these from future cutting programs.

The loss of ash trees is tragic, but the Town of Charlotte has a plan, and individual landowners are informed and many are taking action. Our roads and infrastructure will be kept safe and specimen trees will be preserved.

Preemptive removals suspended: At the start of the COVID-19 lockdown, in anticipation of anticipated revenue shortfall, the Selectboard asked us to determine if budgets could be reduced or eliminated. Because no EAB has been detected and given current understanding of the infestation cycle, I told the Selectboard that we could forgo one year of preemptive ash tree removals if tax receipts are significantly lower than initially projected.