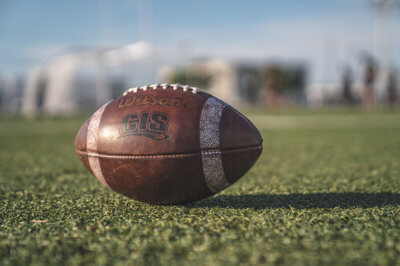 Go, you Packers!
Go and get ‘em!
Go, you fighting fools! Upset ‘em!
Smash their line with all your might!
A touchdown, Packers!
Fight! Fight! Fight!
On, you Blue and Gold to glory! Win this game, the same old story!
Go You Packers, Go!
– Eric Karll

Thanksgiving will soon be upon us.

I have memories of two types of rituals for this holiday. The first revolves around football; the second revolves around food. In this issue of The News I’ll tell you about how in Green Bay, Wisconsin, football rules the roost on Thanksgiving. I will get into food next time.

A longstanding pro-football franchise, the Green Bay Packers is the only publicly-owned major league franchise and is owned by thousands of its fans. Founded in 1919 by Curly Lambeau and George Calhoun, Lambeau was the team’s coach for its first 30 years. The team’s distinctiveness is what it does to the town each fall.

Through most of the year, Green Bay is a relatively small, quiet town located at the southern end of the Lake Michigan bay after which it was named. However, in the fall it turns itself from a town that is home of the National Railroad Museum and Acme Meat Packers into a city that, at least prior to the pandemic, mutated into the football capital of the upper Midwest and home to its heroes Bart Starr, Paul Hornung, Jim Taylor, Boyd Dowler, Max McGee, Willie Davis, Ray Nitschke and the like. Home games often brought what seemed to be half the population of Wisconsin to the city, including some of us who lodged just north of the Illinois border. In the early 1960s I was one of them, a student at Beloit College that is in Wisconsin just above the Illinois state line, much closer to that state’s city of Rockford, than to Packer town.

I had a good college friend who grew up in Green Bay, and, rather than drive the five hours to my own home in southern Minnesota, I spent several Thanksgivings in Packer land. In this part of the upper Midwest, the history of the holiday went back hundreds of years to the early 1600s when the local agricultural folk in good Christian faith established it to thank the lord and commemorate a plentiful harvest. By the time I entered college, the focus had shifted somewhat. Thanksgiving’s Christianity had become Thanksgiving’s “NFL-ity”, with the community’s eyes moving from cornfields to goal posts.

My Green Bay friend invited me to join him there for the holiday. When I accepted his invitation, he explained that Thanksgiving was not simply another day of the week. It rivaled Christmas in its annual activities—food, drink, a sporting event, and it ended with a bar visit.

Since many college students from the area came home and the Packers had an annual Turkey Day football game against Detroit (always in Detroit in those days), the day’s ritual began in the morning, getting off on the right foot with a touch football game—in which, by the way, players who had continued the sport in college had to play a position on the field that was different from their intercollegiate one.

Quarterbacks became linemen; guards moved into the backfield. The game was then followed by the turkey dinner of the day, which lasted only long enough to be in time to drive and greet the Packer players at the airport—cheering them if they won and comforting them if they lost. Following the airport greeting, most of the players and many of the fans drove into town to a bar and grill named “Fuzzy Thurston’s Left Guard.” Its owner had, in fact, been a Packer lineman in the late 1950s, early 1960s. There they drank a toast to a win or followed suit to console a loss. In either case, they imbibed Wisconsin’s state beverage, which my friend said could only go down so well if it was brewed with the state’s own grain and hops, ingredients that were not native to every stop on the NFL road map.

Having enjoyed all parts of this ritual, I spent several Thanksgivings in the Bay. I’m not certain whether my parents bought totally into my excuse that it was equally good use of time, equal to the long drive for a short spell spent at home in Minnesota, which always included having to head north to Minneapolis for dinner at my aunt’s house before leaving on Saturday and heading south for classes to pick up on Monday.

It may be a figment of my imagination. However, I vaguely remember that if I did spend free time at home, my parents required me to delve into a class project by arising early mornings to read, write notes or solve math problems. In their minds, holidays were not just fun and games. These thoughts, however, were replaced by my notion, which meant late morning rises, daytime movies and hanging out with girlfriends.

I believed that my trips north were what holidays should be about— confidence builders, not simply turkey, gravy and mashed potatoes.

I also became a devoted Packer Backer, which I have remained to this day. I must have cheese for my head somewhere in the refrigerator.