Katie Fraser: On the front lines at CCS

Katie Fraser: On the front lines at CCS

Katie Fraser started her teaching career as a long-term substitute at the Allen Brook School in Williston. “I fell in love with the district,” she said. A lack of classroom openings led her to become director of Part 2, the Allen Brook after school program, but when she saw an opening at Charlotte Central School, she jumped at the chance to apply. A six-year resident of Charlotte, Fraser taught 3rd and 4th graders for three years before being asked to take charge of the 5th grade class. “At first I didn’t want to teach anything above 4th grade,” she said “but now there is no looking back. I love this age. There is so much they are discovering about themselves and the world around them.” Fraser is in her fifth year of teaching humanities to her charges and she thoroughly enjoys it. “They are starting to dive into deep and important topics,” she said. “It’s a special age.”

Like everyone else, Fraser is adjusting to the pandemic. She teaches 11 students in person on Monday and Tuesday mornings, followed by 10 remotely in the afternoon. The numbers are reversed on Thursday and Friday, and all learning is remote on Wednesdays. “Remote learning does pose many challenges,” she said “particularly with connectivity and bandwidth. Sometimes I feel like I’m swimming upstream.” The silver lining is the ability to work with small groups in person. “It’s exciting to be able to provide more individualized attention,” she said. “It promotes a deeper understanding.” Although the school is gradually moving toward providing all-day, in-school education for younger kids, Fraser recognizes that she will be on her hybrid schedule for quite some time.

Fraser always knew she wanted to be a teacher, but she felt it was important to broaden her horizons first, so she started her career in social work as an outreach advocate/educator with Voices Against Violence, which is based in Franklin and Grand Isle Counties. “I’d go into schools and collaborate with classroom teachers in teaching about healthy relationships and consent,” she said. After that, Fraser worked for the Howard Center helping families learn important living skills.

While attending graduate school at St. Michael’s College, Fraser spent a month in India as a staff person for an undergraduate trip to Calcutta to work with Mother Teresa’s Missionaries of Charity. “That work will forever be with me and transformed me as a person,” Fraser said. “It helped me understand what we have here and recognize the goodness of humanity that exists.” Fraser was impressed by the people she met on the trip. “Some of the most amazing people I met were on the streets of India and had nothing,” she said. “Being a humanities teacher, I feel grateful to be able to teach about other cultures and perspectives and to broaden students’ horizons.” 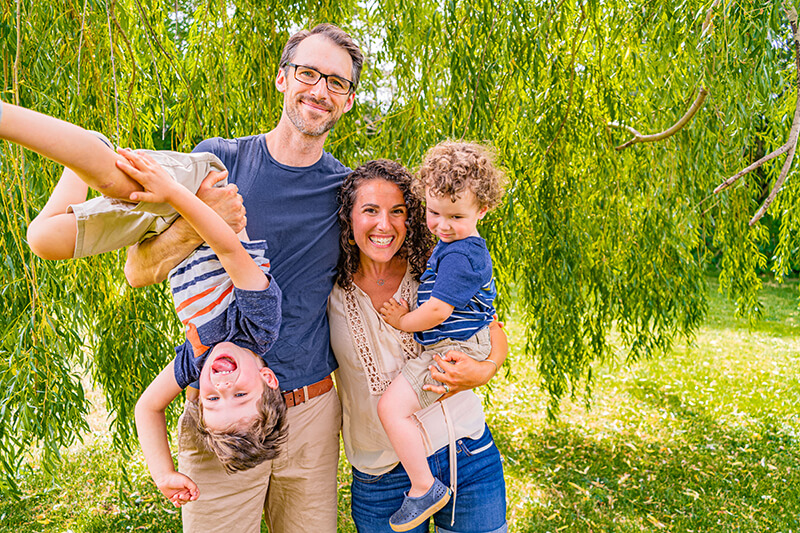 Katie Fraser enjoys her down time with her husband, James, and their two boys, Ronan and Silas. Courtesy photo.

Fraser is helping to broaden her students’ horizons in other ways. “They’re not too young to talk about race,” she said, noting that she has a Black Lives Matter sign in her classroom. Last year her students read Jewell Parker Rhodes’ novel “Ghost Boys”, in which the protagonist’s story is similar to that of young Tamir Rice who was killed by a police officer in Cleveland when his toy gun was mistaken for a real one. This year, her students are reading “Front Desk” by Kelly Yang, which discusses prejudice. “I teach students the importance of finding common ground, bridging culture divides, being open to ideas, and listening to what others have to say,” she said. “It’s an ongoing theme in the books we read.”

Fraser is the mother of two young boys—Ronan is four and Silas is two—and credits her husband, James, with being incredibly supportive. Maybe it’s the presence of young ones in her own home, but Fraser is optimistic for the future, despite current challenges.

“Our priority is our students’ well-being,” she said. “We start every day by checking to see how they are doing, given the gravity of day to day life.” Fraser recognizes that remote education may lead to some deficits in students’ learning, but she believes they are making the best of a difficult situation. “We’re naming and talking about the unprecedented situation and validating students’ feelings,” she said. “It’s important to keep circling back and talking about it. We’re all in this together and we’ll come out stronger on the other side.”